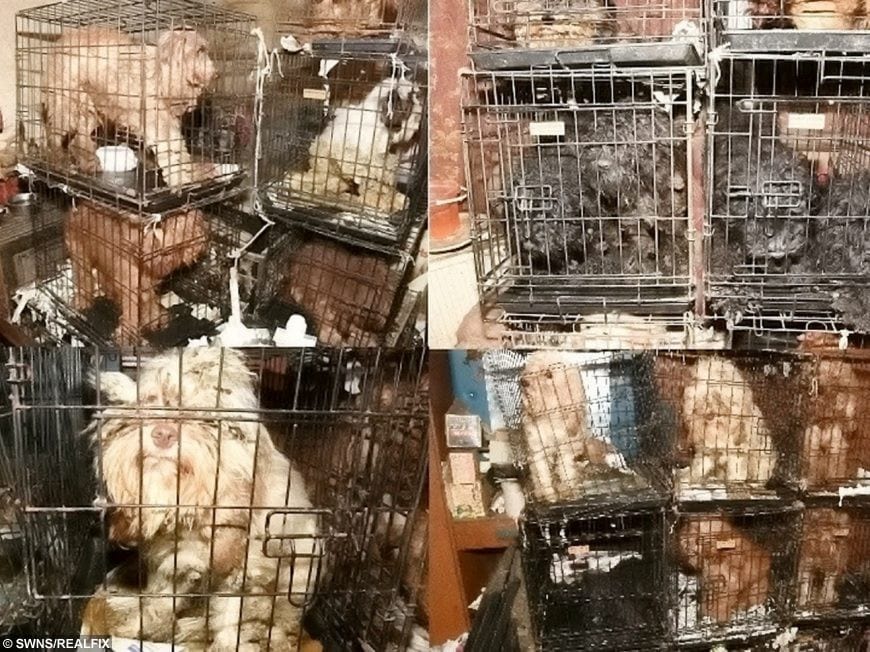 A woman has been banned from keeping animals for life after a raid on her home found 54 dogs stacked in small filthy cages.

These shocking images show the horrifying conditions the huge number of canines were kept in at Kilmany O’Connor’s squalid home.

Some of the dogs had been cooped up in cages together with no space to move and without access to water.

The 57-year-old was arrested after police and RSPCA inspectors entered her home in Morcambe, Lancs., along with Lancashire Fire and Rescue, Environmental Health, Social Services, Lancashire County Council Dog Wardens and a specialist vet.

O’Connor’s home was raided under the Animal Welfare Act (2006) on April 9 after concerns were raised about the welfare of a number of dogs at the address.

She was sentenced to 16 weeks jail at Lancaster Magistrates’ Court suspended for two years on Monday.

She was handed a lifetime ban on keeping any animal and ordered to pay court costs.

All 54 dogs have made a full recovery and have now been re-homed after being seized by police.

The inspector involved in the raid, said: “In the twelve years working for the RSPCA I have never seen such appalling conditions and mental suffering inflicted upon such defenceless animals.”

A police spokesman said: “Within the address 54 dogs were located and found to be living in appalling conditions, the majority of which were cooped up in small cages.

“Due to concerns for their health and welfare, and the unsanitary environment they were living in, all 54 dogs were seized and handed over to the RSPCA.”

The RSPCA led the criminal investigation into the neglect of the animals.