Collect of George the fawn with the Funderburk's bulldog, Max.

An adorable baby deer has struck up an unlikely friendship with a dog after being orphaned at just one day old.

George the fawn was rescued from the side of a road in June 2016 after his mother was killed in a car crash.

He was adopted by Kena Lucas Funderbunk, 36, her husband Eddie, 40, and their four children, who hand-reared him until he was fit and strong. 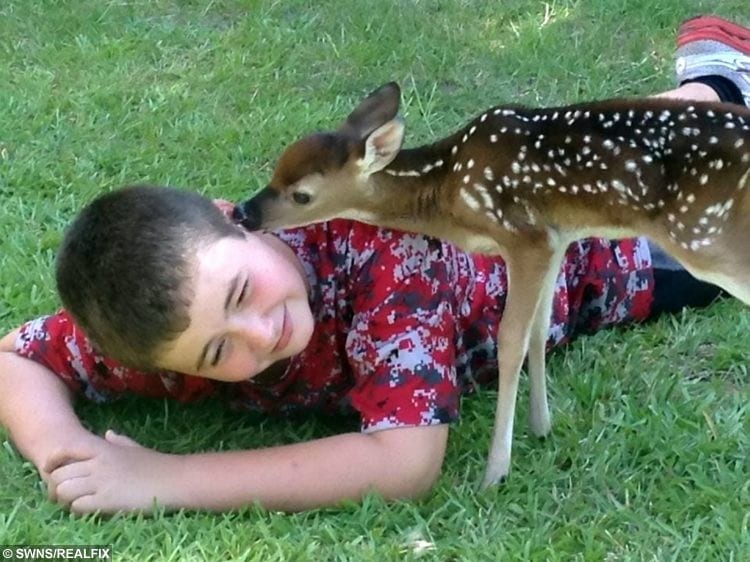 Kena said George quickly became a part of the family – bonding with her son Kaleb, 16, and striking up a special friendship with Max the bulldog.

After six months of caring for George, the Funderbunks released him into woods behind their house.

But nearly two years on – and despite having a new life in the wild – the orphan still regularly returns to visit his family and best doggy pal Max.

Video footage shows Max and George – who is currently sporting bright yellow antlers to protect him from hunters – playing and licking each other. 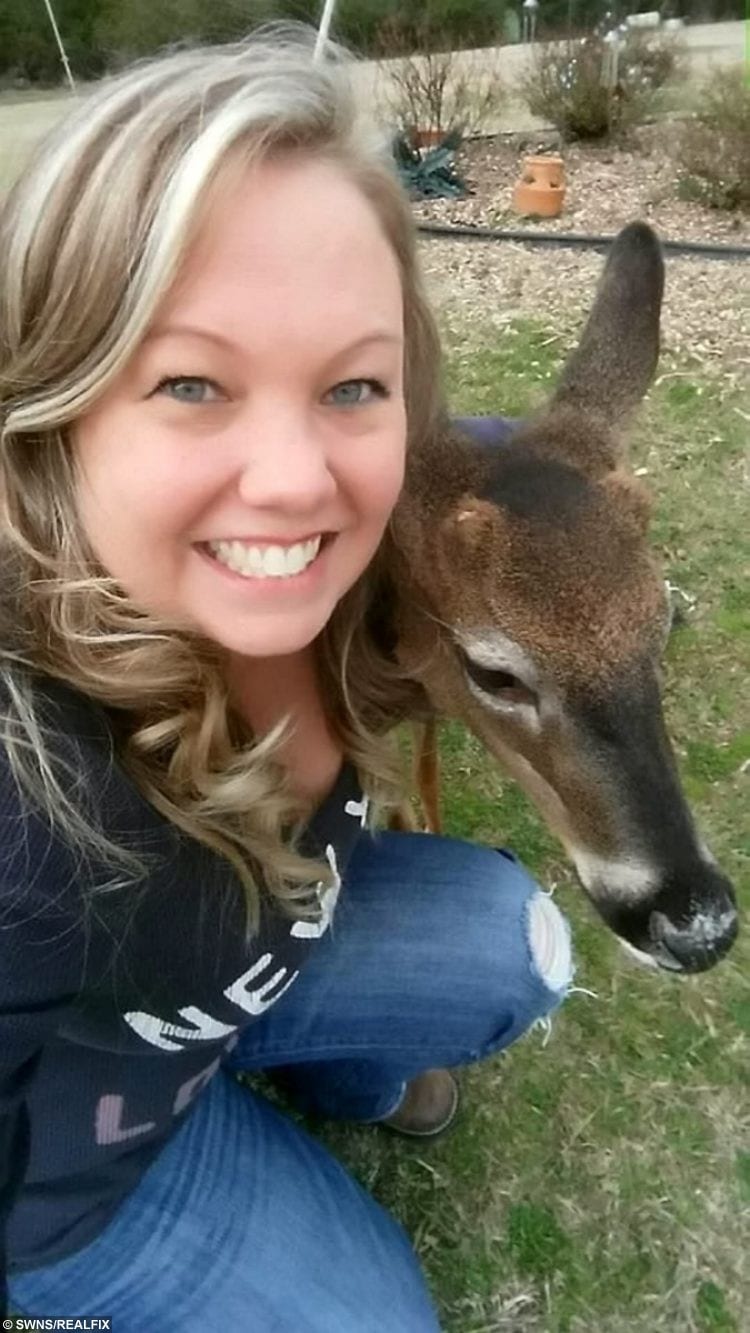 Full-time mother Kena, of Chester County, Carolina, USA, said: “One of my friends picked him up at the side of the road.

“She tried to get him to take a bottle but she couldn’t. She posted on Facebook that she had a deer and needed someone to take it.

“I worked from home at that point and said I’d give it a go.

“I’ve always been an animal lover and we had cats, dogs and chickens and we had raised squirrels and raccoons.

“Once he was feeding, I passed on those responsibilities to Kaleb. Those two always had a special bond.

“Max never bothered him. They just always got along. To this day, George will leap to the dog.” 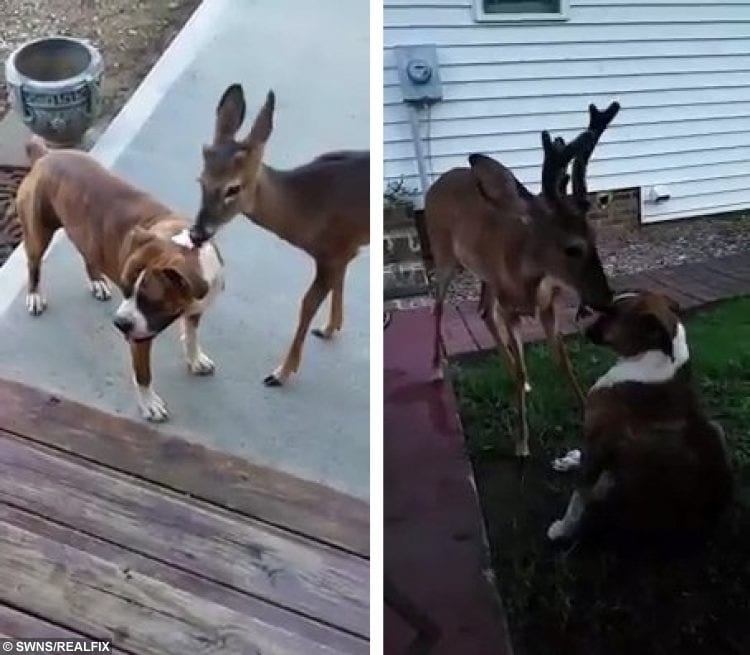 Before releasing him into the wild, animal lover Kena sprayed George with orange and blue paint to protect him from hunters.

The spray rubbed off quickly, so she recently resorted to wrapping his antlers in yellow vinyl tape to protect him from being shot.

The bright accessories have helped him survive two hunting seasons so far.

On Monday, Kena and Eddie, a truck driver, asked local hunters not to shoot George, and pleaded with them to look out for his yellow antlers.

Kena wrote on Facebook: “Local hunters, please don’t shoot the 7pt with the yellow tape around his antlers. If you see him, it’s George!” 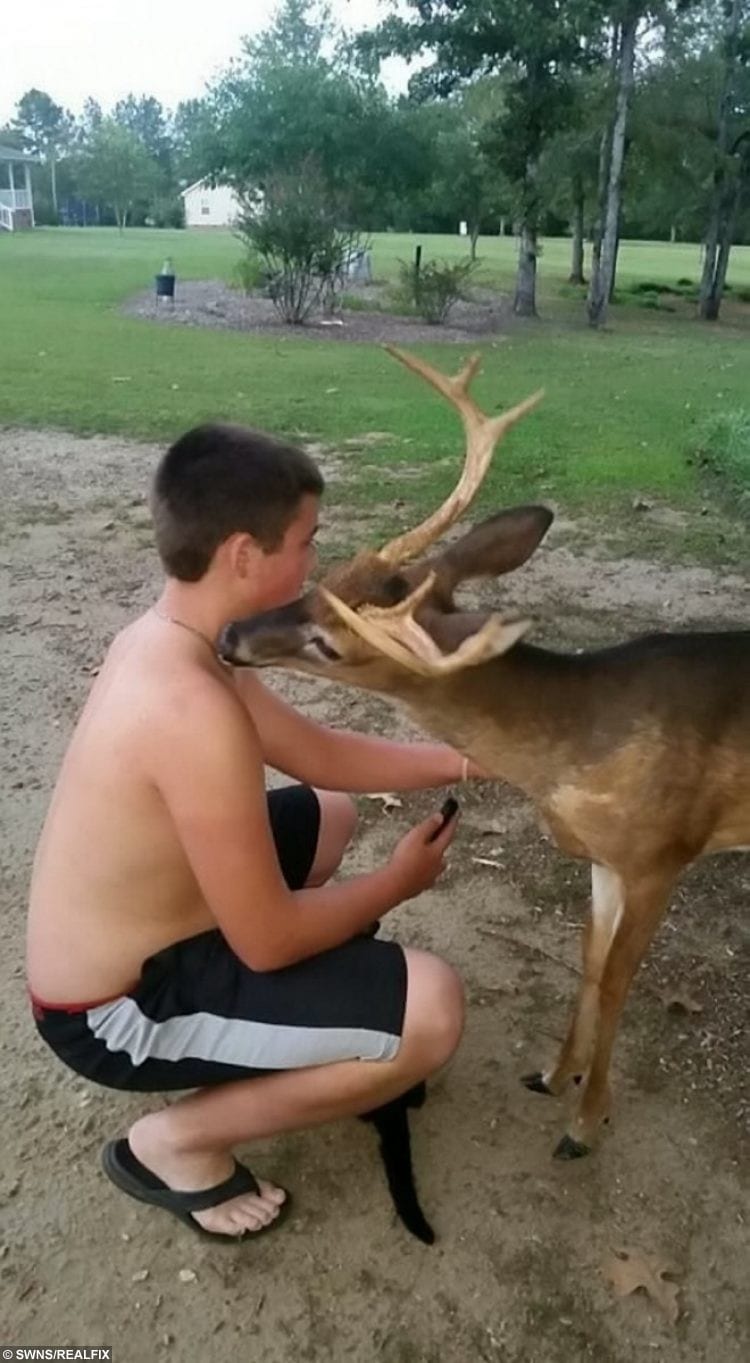 The mother to Kaleb, 16, Laney, 11, Bristel, four, and Eli, two, said: “We sprayed him with non toxic orange and blue paint one year but it only last for about a month.

“We don’t want to put a collar on him in case it gets tangled in the barbed wire around one of the local farms.

“This year we’ve wrapped vinyl tape around his antlers and we hope it stays on.”

Although she will fight for George’s survival, Kena was circumspect about his life.

She said: “We would much rather he lived two and half years being free than six years cooped up in a pen away from his natural habitat.

“We know that he may or may not come home but we know that he had a wonderful life and he could have died at the side of the road.”

Couple Had Miraculous Escape After Their Plane Crashed – While On HONEYMOON

Couple Had Miraculous Escape After Their Plane Crashed - While On HONEYMOON