Alpaca fights back against heartless thieves by spitting at them

Judy Ainley with horse Huggy Bear and Victoria the alpaca. See Ross Patty copy RPYALPACA. A protective alpaca attempted to stop heartless thieves in their tracks - by SPITTING at them. Victoria the alpaca leapt into action when the yobs stole #3,000 worth of items from her stables including a specially made saddle for retired horse Huggy Bear. The gutsy alpaca is thought to have spit all over the entrance to the stable in an attempt to stop the thieves before they managed to get away.

A protective alpaca attempted to stop heartless thieves in their tracks – by SPITTING at them.

Victoria the alpaca leapt into action when the yobs stole £3,000 worth of items from her barn including a specially made saddle for retired horse Huggy Bear.

The gutsy alpaca is thought to have spit all over the entrance to the barn in an attempt to stop the thieves before they managed to get away.

Now owner Judy Ainley has spoken of her sadness that someone would target the 31-year-old pony who has worked with disabled youngsters over the years.

Judy, of Ivy Dene Farm in St Michael’s on Wyre, Lancs., said: “What has happened has been traumatic. I don’t know how anyone could do this to Huggy Bear.”

“The pen gate was barged open, which would have been Victoria. It seems that the thieves dropped a bridle in the barn which is where Victoria was. I think she had given chase to them and scared them off.

“On the door where they entered there was a lot of Alpaca spit and as Victoria is the only Alpaca I have which has ‘attitude’ I reckon she gave them a run for their money and emptied the contents of her tummy all over them.

“Thankfully they did not hurt the animals.”

Lancashire Police confirmed it is investigating the incident, which happened some time between 8pm on Saturday and 8am on Sunday and urged they urged anyone with any information to get in touch.

A police spokesman said: “Someone has approached the property gone into the stables and a garage at the rear of the property and taken numerous items worth around £3,000 value. We are looking into it. If anyone has any information or if they know anyone who has tried to sell on the items I would urge them to contact us.”

Judy said she spent some of her RAF pension to treat Huggy Bear to the special saddle.

She said: “For this to be taken away from him, that hurts more than anything.

“It was specially made for his comfort, he has given so much to this area, spending lots of time helping people with learning difficulties.”

“Everything that was specially made for him will probably only sell for peanuts — so was it really worth stealing it?

“But I have been so overwhelmed by the response from the community.”

“People have been so generous and kind. “Somebody even bought a saddle round for Huggy but unfortunately it does not fit.

“I don’t know how someone could do this and I just want to warn other horse owners to be on their guard.” 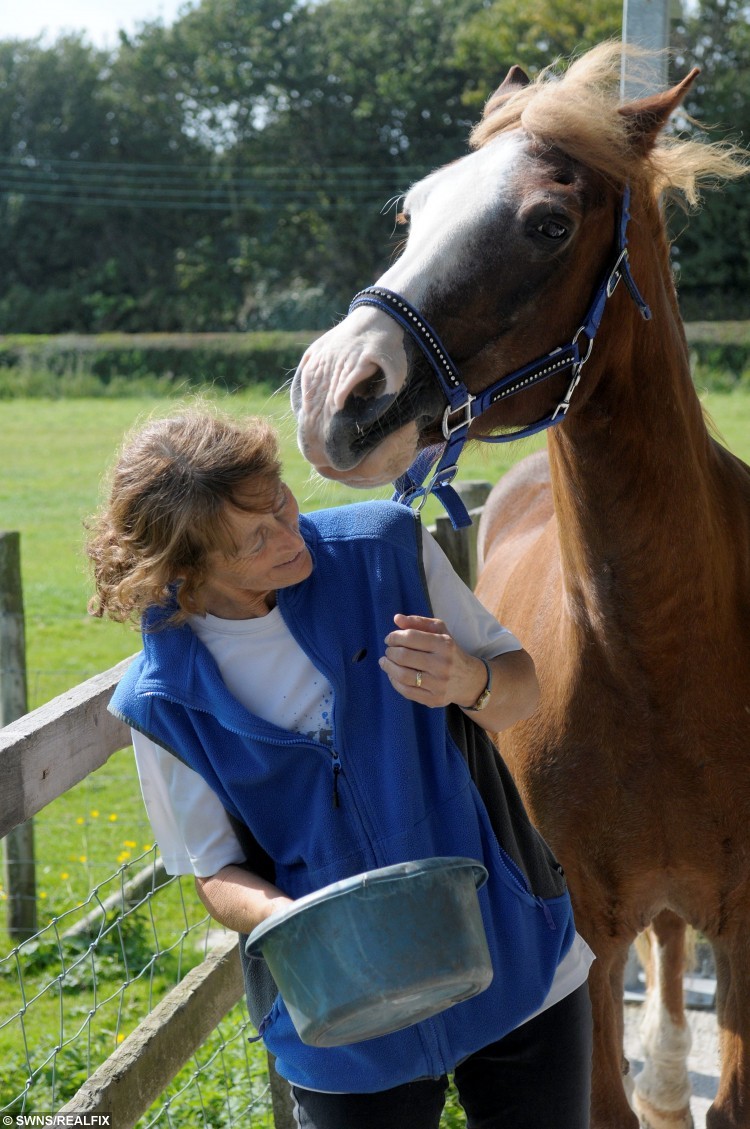