This amazing photograph shows a massive Asian Hornet devouring a wasp outside a pub.

The species of hornet – which is know for killing bees – was spotted outside The Bird In Hand on the outskirts of Bristol.

The photo was taken by Bristol resident Jeremy Sidders on his phone.

“He’s a big old beast. Everyone was quite surprised to see one just sitting on a post.” 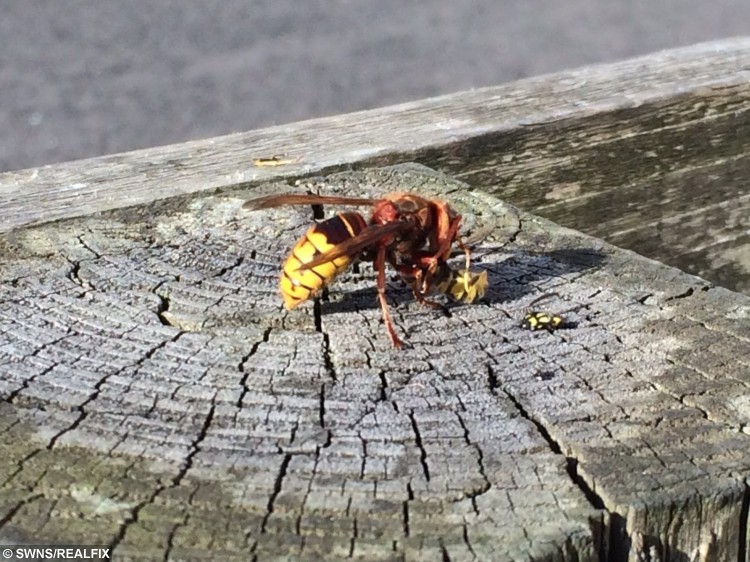 Specialist hornet-killing squads have now been sent to Gloucestershire to eradicate the foreign insects.

It is not clear whether this is one of the new invaders or one of its indigenous European cousins.

European hornets may not have the same fearsome reputation as Asian hornets – or even as wasps – but they can inflict a painful sting and bite at the same time.

They do not tangle with humans as often as wasps because, unlike wasps, they do not like our food. Instead they eat other insects.

But disturbing a hornets’ nest can be extremely dangerous, as the entire nest of up to 700 insects will join in an attack on any perceived threat.

They build nests in tree trunks, bushes, the sides of buildings, barns, attics and in hollow walls.

EXPLICIT VIDEO: Couple spark outrage after being filmed having oral sex at the top of a FERRIS WHEEL

EXPLICIT VIDEO: Couple spark outrage after being filmed having oral sex at the top of a FERRIS WHEEL