Baby animal set up home with woman after climbing into her dressing gown!

A woman who was sitting in her garden was shocked when a baby SQUIRREL climbed into her dressing gown – and hasn’t left since.

Livi Boulting, 27, was having her breakfast at home when she spotted the tiny squirrel – who she has guessed is around 10 weeks old – chasing her elderly cat around the garden.

Initially wary of the wild animal, Livi soon became friends with him when he ran up her dressing gown and nestled into her arm.

Livi and her mum, Catharine Boulting, 54, tried to encourage him back into the wild, only to find him tapping at their kitchen door the following morning. 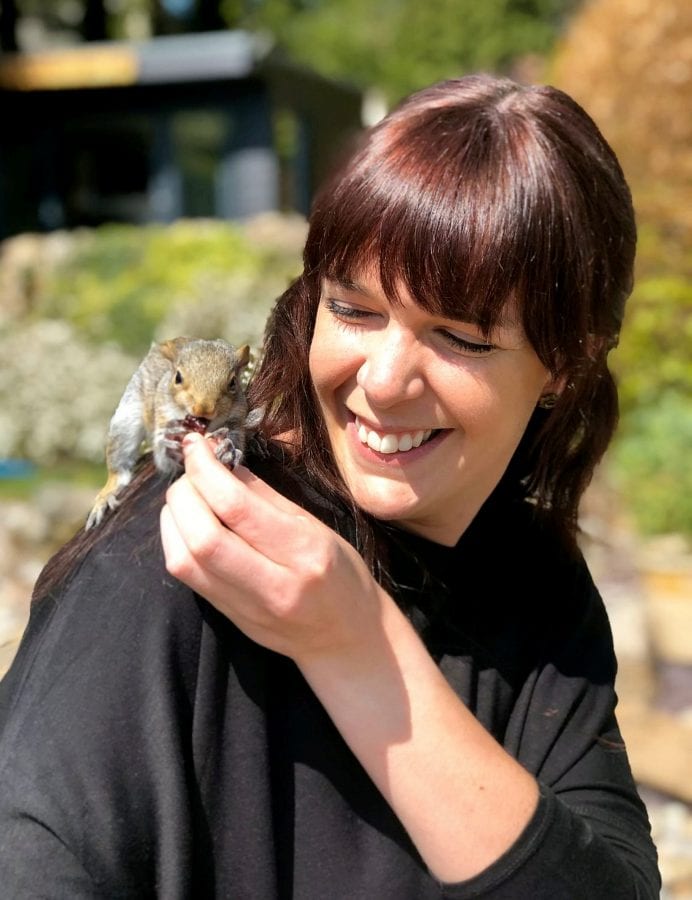 They have named the cute creature Harold, and are spending their days with him in the garden enjoying the sunshine, before he returns the next day to enjoy their company once again.

“It’s definitely not the motherhood I expected, but beggars can’t be choosers – and he is so cute.”

Livi was at the home she shares with her mum Catharine, step-dad Andy, 52, and sister Honey, 14, on Saturday 18th April, when she spotted her 11-year-old cat Baby darting around the garden.

On closer inspection, she realised Baby was being chased – by none other than a tiny squirrel.

“I couldn’t believe what I was seeing,” Livi said.

“It was quite early, so I went outside to double check I wasn’t seeing things – and there was this baby squirrel chasing Baby!

“She’s quite blind and can only see shapes bless her, but he wasn’t shy at all.” 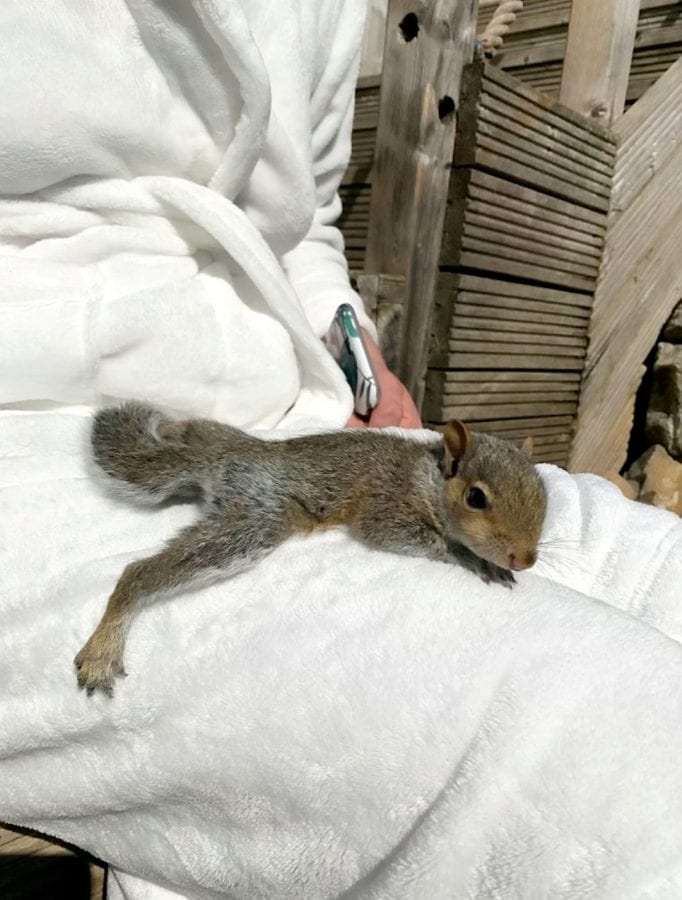 Not sure what to do, Livi grabbed a towel to lay on the floor for the woodland creature.

“I was a bit nervous – I’ve never been that close to a squirrel before,” Livi said.

“I stepped away from the towel and he ran straight onto it and stretched right out on his tummy.

“His legs kicked out at the back like a little frog – it was so funny.”

With Baby the cat safely inside away from the little terror, Livi sat on the back step and watched as the squirrel enjoyed the sunshine from his towel.

But before she knew what had happened, he’d run up her dressing gown and nestled in the crook of her arm!

“He snuggled right in,” Livi said.

“I didn’t want to move and disrupt him – he fell asleep straight away.” 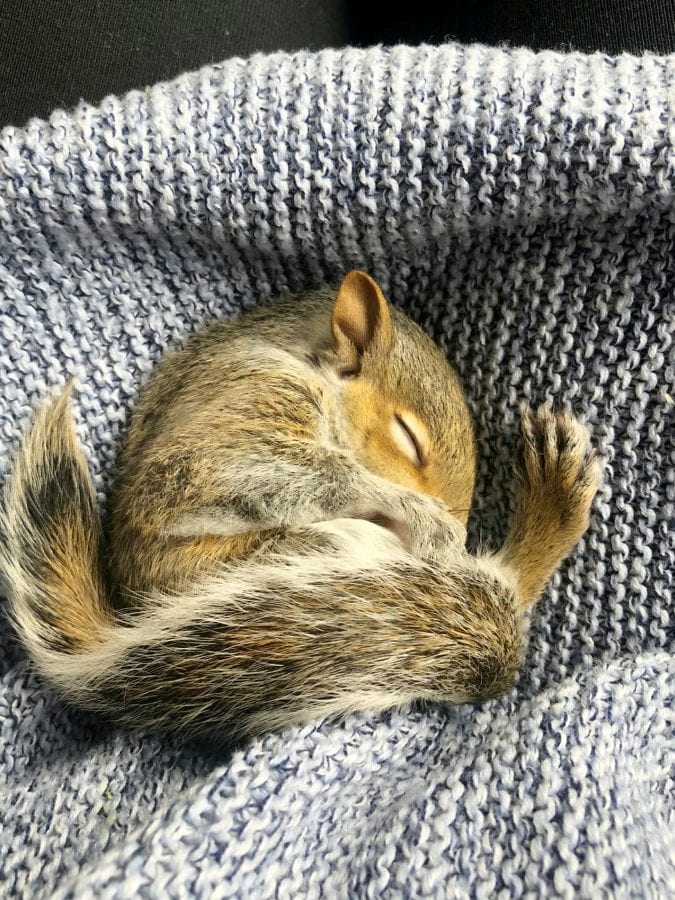 Livi called for the rest of her family to come outside, all of whom were in awe at the tiny creature.

Livi promptly named him Harold, after distinguishing he was a boy, and spent the rest of the day wondering what to do with him.

The family knew it wasn’t ‘normal’ to make friends with a squirrel, even less so to have one as a pet, so tried to put him back into the woods.

“He kept going up into the same spot in the woodland behind our house, so one time we followed him and found a dead adult squirrel there,” Livi said.

“We realised he must be an orphan, but knew we couldn’t have him as a pet!”

The family did some research online, but discovered that if they took Harold to the vets he would most likely be put down as grey squirrels are not endangered and therefore not protected. 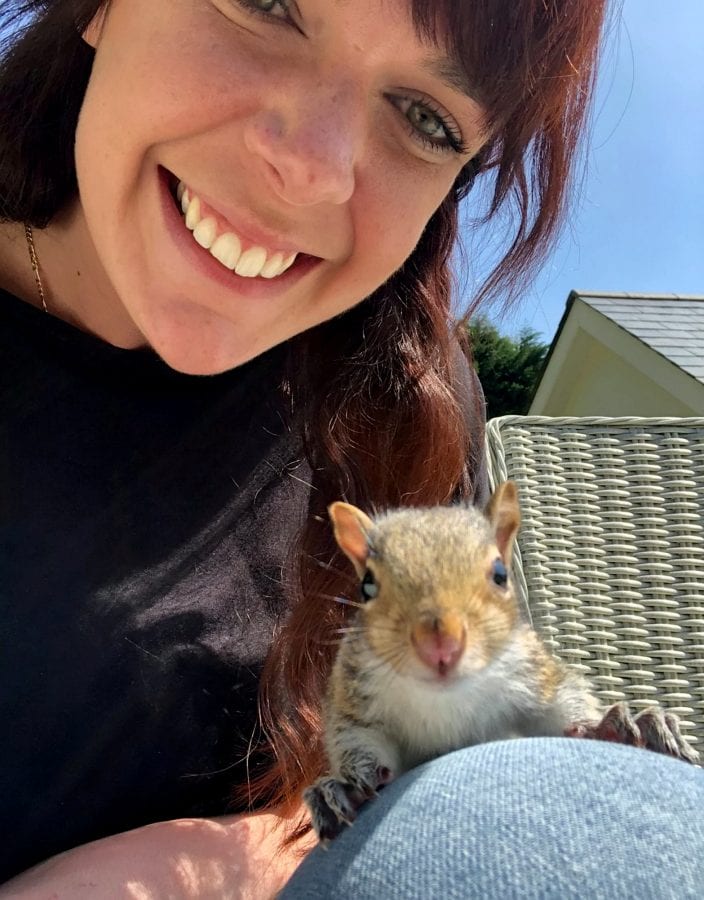 They also established he must be around 10-weeks-old because he has a full coat of fur but is still small enough to fit in the palm of Livi’s hand.

Not wanting their new friend to come to any harm, they encouraged him to stay outdoors on Saturday night and find a new home.

“It was quite emotional leaving him out there at night,” Livi said.

“We knew it was the best thing for him – but Harold had other plans.”

The next morning, they came downstairs to find Harold tapping at their patio doors, waiting for the family to appear.

“It was unbelievable – there he was again,” Livi said.

“We spent the whole day with him outside in the sunshine – he just loves being close to you.”

Livi wasn’t sure whether he was old enough to find food for himself, so the family made him some snacks, including nuts, avocado and dandelions. 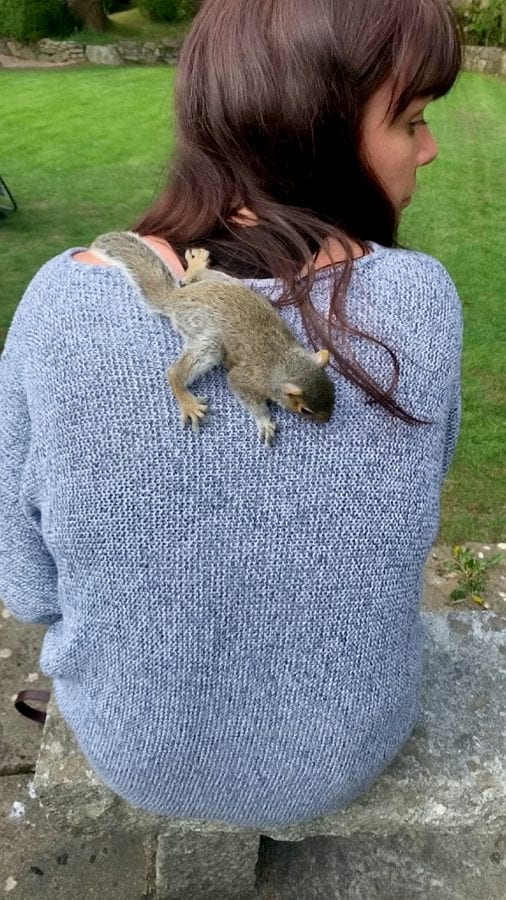 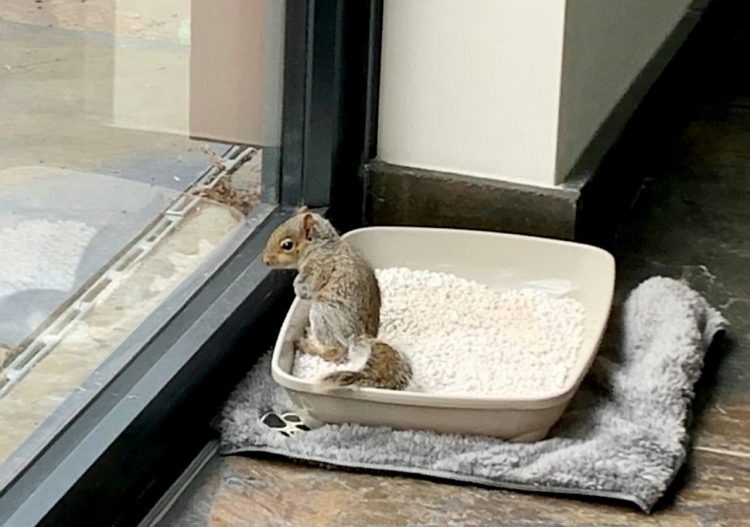 Speaking of Harold’s characteristics, Livi said: “He’s cocky, but we love him.

“If I’m outside, he’ll run up my legs and onto my shoulder – he loves to perch himself there.

“He’ll nestle on you and fall asleep in seconds. And he loves his ears being rubbed.”

Although Livi knows they shouldn’t have ‘kept him’, they still make sure he sleeps outside at night to keep the situation as normal as possible.

“It’s definitely not the motherhood I had expected but beggars can’t be choosers!

“Who knows how long he’ll stick around – but we’re enjoying his company very much while he does.”

You will not believe how much this premature baby weighed, but look at him now!