A baby donkey rejected by its mother will spend its first Christmas in a family’s home — despite nibbling on their tree and pulling down their stockings.

Miniature mule Bond also chews on his owner’s precious Mary Berry cookbooks and even poos in the kitchen when Alison Wiseman isn’t looking.

But the 20-inch-tall donkey has still been allowed to spend the festive season in her house because his real mother won’t look after him.

The cheeky ass, who is just three months old, received his name after Alison decided to name him after Sean Connery.

He has been bottle-fed for three months and now lives between her kitchen and the conservatory — but still needs to learn good manners.

“Now that it’s Christmas we’ve got a Christmas tree – it’s an artificial one. He strolls past, opens his mouth and just grabs anything he can.

“Sometimes it’s the tinsel, sometimes the lights or the pretty ornaments.

“I think it’s all the pretty colours. There have been some casualties of the ornaments that will never see Christmas again.

“However, we try to keep an eye on him. As soon as we see him going near the tree we tell him off.

“But sometimes you are not there and you hear the commotion and your baubles bouncing across the floor.

“And the Christmas stockings that are on the fireplace — I’m forever picking them up because he keeps pulling them off.

“But there’s one bit that he likes even more — he likes Mary Berry.

“I have a line of cookery books and he’s chewed them all off the shelf and all the corners are all chewed. Poor Mary Berry.” 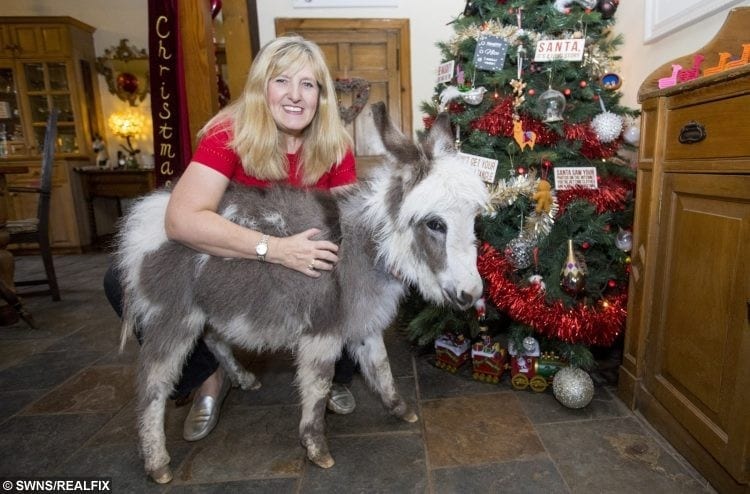 Donkey Bond was rejected by mum Dippy (short for Serendipity) after birth at Balnuith Farm in Tealing, near Dundee, in September.

Alison decided to bottle-feed the miniature Mediterranean donkey and brought in the vets who checked him over.

Three months later, the foal is going from strength to strength and, if everything goes well, Bond will be able to live outside with the other nine donkeys at the farm in spring.

Alison said: “When his mother gave birth to him in September she just rejected him.

“She’s a first-time mum. Often when mothers reject their young it’s a sign that there’s something wrong with the baby.

“There was the possibility that she knew better than us that he wouldn’t survive.

“Because she wasn’t feeding him, we brought him in the house. We had powdered alpaca milk here so we started giving him that. 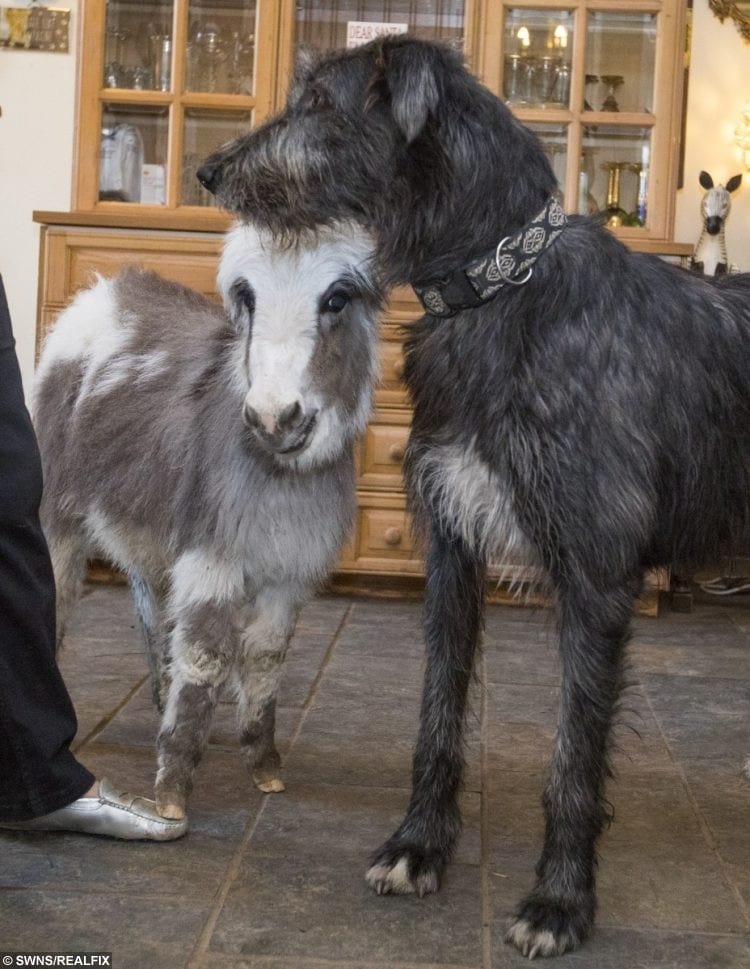 “Every two hours I was feeding him this alpaca milk and by morning he was still looking fine. We brought the vets in to check everything out.

“They basically said that we should just carry on with the milk as it was agreeing with him.

“When you sit up with an animal every two hours bottle-feeding them you know whether they’re sick or not. We were very confident that he wasn’t.

“It was just purely that his mother wouldn’t feed him.

“From when he was born, he slept in the kitchen at the AGA. We are gradually trying to get him outside but it’s winter and we don’t have the heart to put him outside.

“We’ve worked so hard to look after him and we don’t want to risk anything happening to him now.”

After moving into the house, Bond has struck up an unlikely friendship with Alison’s Irish wolfhound — called Cilla Bark — and his owner reckons Bond now identifies as a dog. 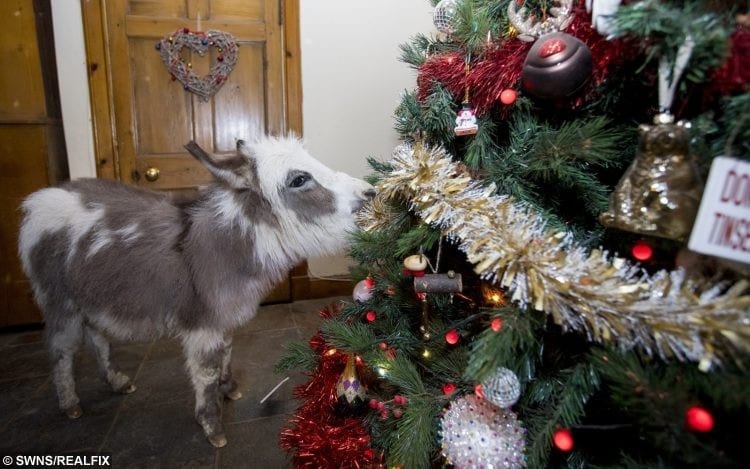 Alison said: “He now sleeps in the conservatory but during the day he can hang out in the kitchen.

“We treat him like a puppy so when we feed him we put him outside. But he does have accidents, there’s no question about that.

“We’re trying to train him like we would a puppy and take him outside every so often.

“He does not want to be a donkey. He prefers to be a dog. His best friend is an Irish wolfhound called Cilla Bark.

“They’re just always together. They’ve bonded and she’s become the companion for him.

“They actually play sometimes like two puppies would play. They wander around the farm together.

“She now eats carrots and he eats dog biscuits. Who would’ve believed that?”

Bond is expected to eventually grow to 34 inches tall and become a show donkey at Balnuith Farm which Alison’s runs with husband John, 66.

Alison added: “He’s just really sweet and lovely. He will eventually become a show donkey. He’ll be a career boy some time.”

Globetrotting Dog With One EYE Has Traveled Over 5,000 Miles On Boat Named After Her

WATCH: Tiny surfer shows off his skills – at just four-years-old