Owner Suzanne Lane with her basset hound Remy who fell from a third floor window and survived, Steyning, West Sussex. See SWNS story SWDOG; Basset Hound Remy escaped with minor injuries after plummeting more than 30ft (10m) onto rock-hard CONCRETE after diving out of an open third-storey attic window Ã because his big ears helped him GLIDE. The daredevil two-year-old dog suffered just minor injuries despite landing on his face, and his owners reckon his miraculous escape could have had something to do with his lengthy lobes. Owner Suzi Lane said: ÃI donÃt know if he was trying to glide down or if it was his ears that saved him. ÃItÃs just a miracle.Ã

A Basset Hound that jumped out of a third-floor window did a ‘Dumbo’ and was saved – by his large floppy EARS.

The puppy plummeted more than 30ft (10m) out of an attic after spotting a cat on the ground below.

He fell towards rock-hard concrete – but his owners say his fall was broken by his massive lobes.

Remy had dived out of an open third-storey attic window but his massive floppy ears provided some resistance and slowed his fall.

The two-year-old dog suffered just minor injuries despite landing on his face.

Owner Suzi Lane said: “I don’t know if he was trying to glide down or if it was his ears that saved him. It’s just a miracle.”

Suzi and partner Richard Bradley, from Steyning, West Sussex, had only adopted the black and white dog eight weeks before, from local animal rescue charity WADARS.

She said: “He’s quite clingy and doesn’t like to be left alone but we have to go out sometimes and this was one of those occasions.

“We were at a concert and had a couple of missed calls from our next-door neighbours saying that the dog had fallen out of the attic window.”

“Another couple of neighbours had taken him to the vets and we assumed he must have massive internal injuries.

“My partner rushed to the vets and unbelievably we discovered that Remy hadn’t even broken anything – it’s a miracle.”

The couple usually kept the door to the attic shut, but plucky Remy had somehow managed to nose his way into the room after Richard left the door slightly ajar.

Fireman Richard thinks Remy might have seen their cat Otis out in the garden below and decided to join him via the attic window.

Suzi added: “It was a shock at the time, but he is an amazing dog I said about a week into owning him that he was trouble and now he’s proved it. We love him so much though.”

She said: “Remy was brought into us out of hours to see myself and vet Julian Hoad. He had jumped from the third floor window of their house directly onto the concrete below.

“Julian and I carried out X-rays and emergency care immediately, only to find that by some miracle Remy had survived with only very minor injuries and was fit and well to go home the next day.”

She added: “Remy was unbelievably lucky. He suffered some slight bruising to his sternum and a partial left lung collapse.

“We gave him an hour of oxygen therapy, intravenous fluids, pain relief and carried out X-rays. It really was astonishing.

“When X-raying him, we expected many broken bones, internal bleeding, fractures and severely collapsed lungs – but he was pretty much unscathed.”

Proud owner Richard added: “He’s really naughty and once stole our dinner. We found him out on the lawn eating our quiche.

“He has only little legs but he’s remarkably agile and will get up onto the dining room table and finish off anything left there if there’s no-one looking.”

“And at any opportunity he’ll nip and see if the cat has left any food. He’s high maintenance – it’s worse than having a child – but he’s lovely.” 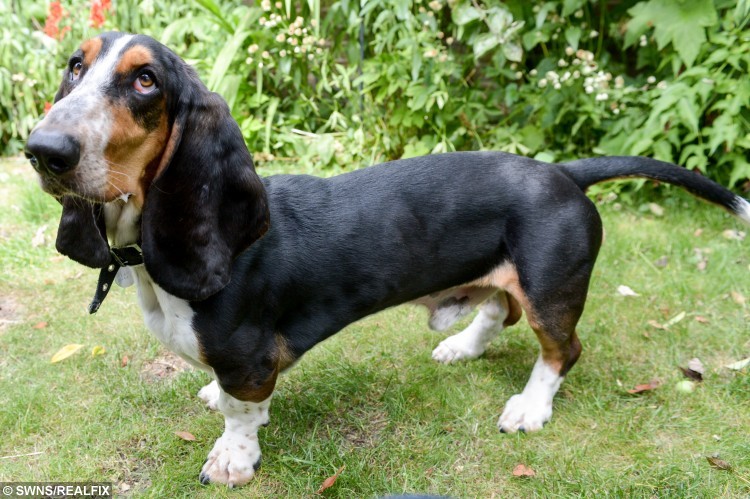