Collect photo of Katie Heaselden's pet pug Penny. See SWNS story SWPUG; Britain's toughest pug has been reunited with its owner - after surviving NINE days alone on a remote and wild moorland. Distraught Katie Heaselden was walking her pampered pooch Penny on the Lancashire Fells when she became spooked and ran off. She launched a desperate appeal that saw hundreds of volunteers out searching for the tiny dog. Katie also clocked up nearly 2,000 miles herself travelling up and down from her home in Paignton, Devon.

Britain’s toughest pug has been reunited with its owner – after surviving NINE days alone on a remote and wild moorland.

Distraught Katie Heaselden was walking her pampered pooch Penny on the Lancashire Fells when she became spooked and ran off.

She launched a desperate appeal that saw hundreds of volunteers out searching for the tiny dog. 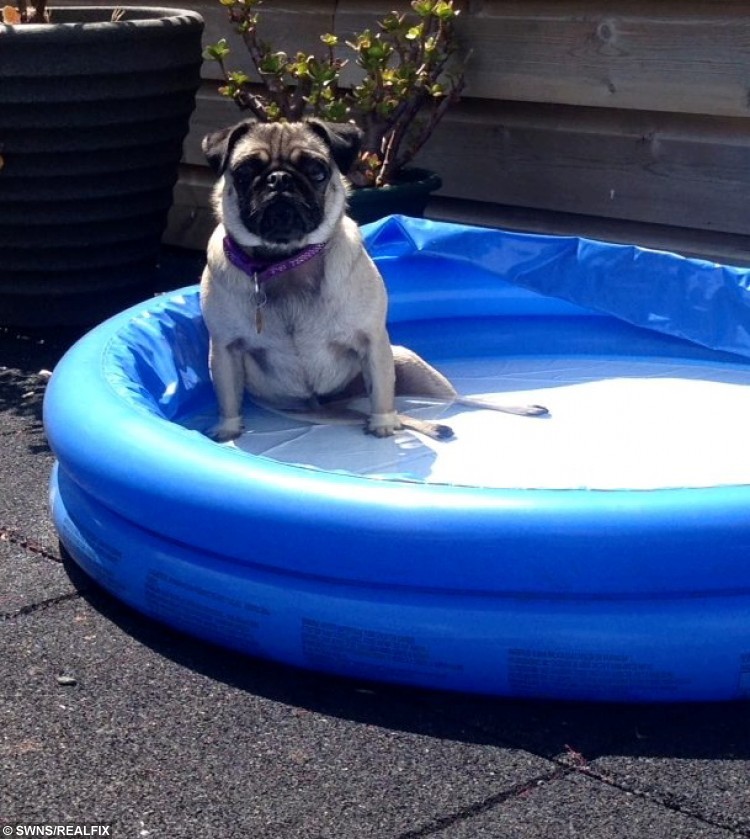 Katie also clocked up nearly 2,000 miles herself travelling up and down from her home in Paignton, Devon.

But after accepting her chances of ever seeing Penny again were slipping away she was stunned to receive a call from a farmer who had finally found and caught her.

He had even got his sheepdog to sit on Penny before she could run away.

And apart from being very thin and in need of a rest she was checked over by vets yesterday morning and told she should make a full recovery.

Penny had survived nine days with nothing to eat in freezing conditions.

Katie, 23, a nurse, said: “It is such a huge relief that she is home. She slept all night last night. I literally have no idea how she coped out there for so long.

“She is such a lapdog we used to joke that she would never last a day out in the wild – but she has gone and survived nine.

“I can not believe it. It is incredible really and she really does deserve the title of Britain’s toughest pug.”

Penny went missing during a walk on Parlick Fell in Lancashire. She was found nine days later on the Bleasdale Fells.

She was seen by a vet and despite being losing weight and having a few bumps she should make a full recovery.

She has gone from weighing 6.1 kilos to 4.8 kilos due to her ordeal.

Katie said: “She is very skinny and and we need to build her back up to eating normal food but apart from that she is ok.”

“She is a completely pampered pooch. She is a lapdog who I carry around everyone. Very occasionally she goes in my handbag, but mainly I carry her in my arms.”

“She had lived a very charmed life. To be honest she has gone back to that already but she has now proved she can look after herself when she needs to.”

As soon as Penny went missing Katie took to Facebook to share photographs in the hopes that someone would soon spot the missing pug.

The post was shared hundreds of times and an army of volunteers from across the country helped during the nine day search to bring her home. 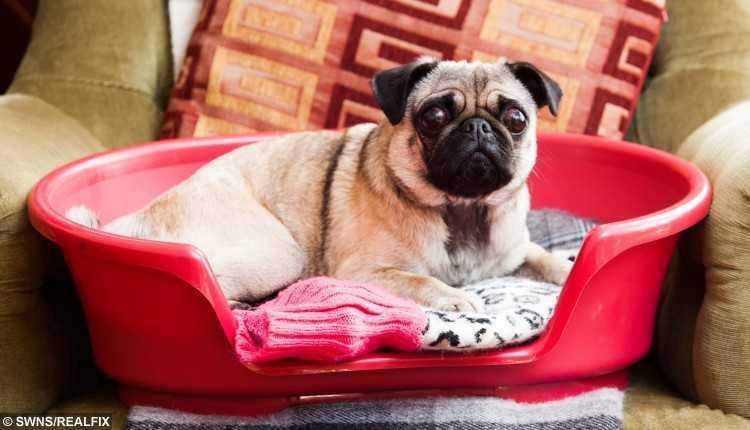 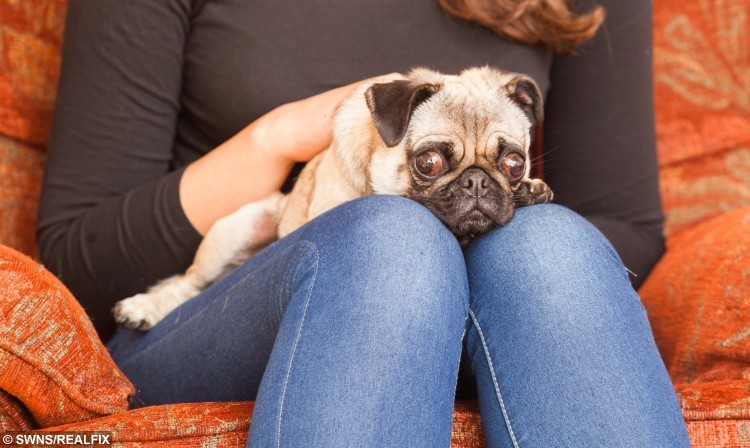 Katie was visiting her partner’s home in Lancashire when they took for a walk on the Fells.

She said: “She spends her life sat on my lap and follows us everywhere. She doesn’t usually leave my side but she just got spooked by something.

“You could not see 20ft in front of you as it was so misty and foggy up there all that day. During the nine days we had a lot of sightings of her but no-one could get close to her.”

“She wouldn’t come up to someone else. But then a farmer saw her and went out to get her. She again ran off but he then set his sheepdog on her who sat on her.”

“He was a long way from where we had lost her though. We have travelled 1800 miles up and down over the last few weeks to try and find her as I have still had to get to work.”

“We had posters up all over the place and she still had her harness still on, which she had worn for nine days. Luckily it still had a tag on it with all our contact details.

“We got a call and I drove up to pick her up late on Monday night. It was starting to sink in that she may not be coming back home.

“We tried to stay positive but it is so remote up there. We are just so relieved to have her home.”

Katie’s mum Jennie Davies, 50, from Paignton, Devon, said hundreds of people got involved in the hunt for Penny.

She said: “There were people with hand-gliders searching The Fells, Fell runners, people on quad-bikes, people walking their dogs, local farmers.

“I can’t tell you how many people got involved to help bring Penny home. Penny is a real lap dog, we were so upset.

“It really is just such a huge and wild area and was like looking for a needle in a haystack. But Penny is apparently completely fine. She has just been living wild for nine days.

“She has a twin brother called Percy who lives with me just next door, they see each other every day, and he has really been pining for her. We are all so, so happy that she is home.

“People from all over the country have helped to get her back, it’s been a national effort, and we are so grateful.” 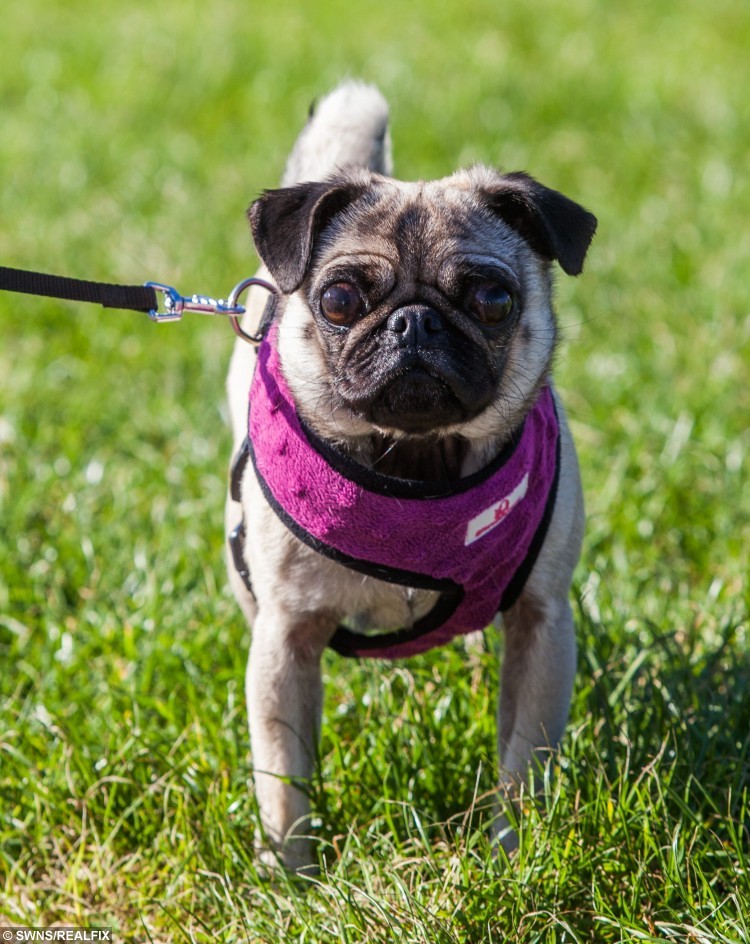 Sisters give birth on the same day and both babies weigh exactly 6lb 9oz!!

Sisters give birth on the same day and both babies weigh exactly 6lb 9oz!!