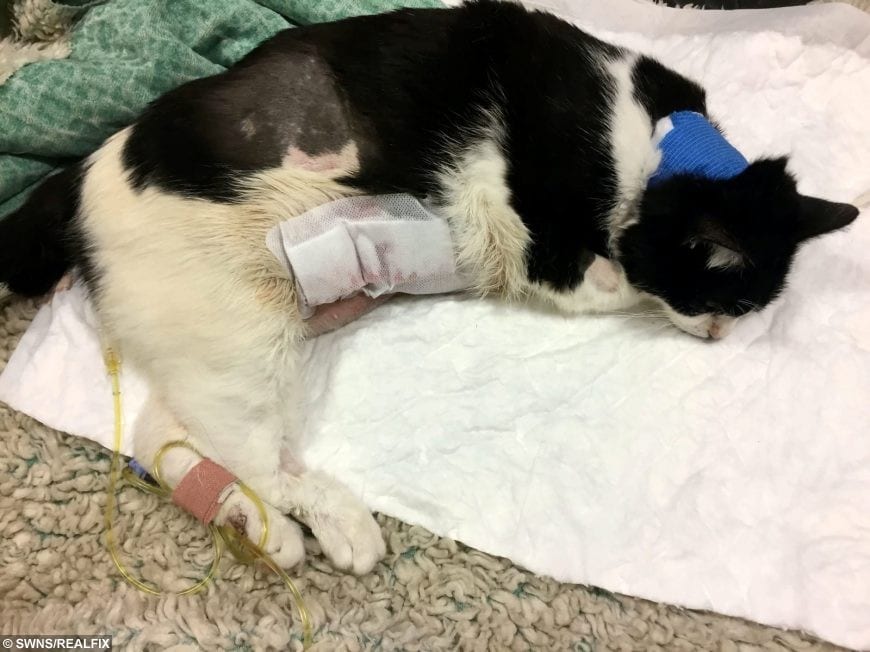 Met Police chiefs have been landed with an £8,000 vet’s bill after one of their dogs savaged a pet cat called Spangle that had to be put down.

The incident leading to Spangle’s horrific death began when police tasered and arrested a man involved a dispute in Beckenham, south east London.

Most of the police officers had left the scene, but a few dog handlers remained to search for other suspects who had fled.

Distraught Mrs Anthony said her beloved pet was left with puncture wounds ‘all over his body’.

In a bid to save him, she got treatment from a specialist vet but she said Spangle was left paralysed, incontinent and his lungs repeatedly flooded with fluid, so she reluctantly decided to have him put down.

Mrs Anthony, 60, was awoken by the raucous outside her house on the morning of July 6 and watched events unfold from her bedroom window.

After the incident, the officers dispersed quickly but two vehicles remained on the street.

She saw an officer walking his large dog around the driveways and gardens along the street.

The mum-of-two became concerned about her cat who she knew would be nearby.

At around 6:30am an officer from the Met Police’s Dog Support Unit knocked on her door told her his colleague’s dog had attacked Spangle.

As they spoke, therapy Mrs Anthony got a call from the local vet who told her Spangle was in an “extreme condition.”

She said: “The policeman told me his colleague had let the dog out to go to the toilet when it chased the cat around the corner.

“Spangle had been out playing with his mate, Leo, another black and white cat.

“My neighbour was looking out of the window. She told me Spangle was concerned and looking behind him as he walked down the pavement with the police dog following.

“The dog literally attacked. She said it was horrific to watch and was distressed for two days after seeing it.

“It was shaking Spangle around in its mouth and left puncture marks all over his body. When the policeman called him back he dropped him.”

“If only the policeman had put a lead on him, my cat would still he here. I would still have my Spangle sleeping on my bed every night.

“He was a very trustworthy cat, I think that’s why he didn’t take off at the sight of the police dogs.”

The dog’s police handler visited Shirley later that morning after returning from the vets.

She said: “He was clearly upset, but told me his dog ‘didn’t like cats’ and that they ‘normally scarper when they see the dogs.”

She added: “I couldn’t go to work.

“I’ve been distraught and it’s like losing a member of the family.

“He was only 11 and my son was very close to him too. He is really upset. This is just really awful, and it has been traumatic.

“Handlers should make sure when they take a dog out of a car in a residential area it is on a lead.”

The Met Taskforce Professional Standards Unit is investigating her complaint.

A Met spokesman said: “Officers from the Met’s Dog Support Unit were called to support officers responding to an incident in Clement Road, Beckenham.

“Upon police arrival, the suspects had fled the scene. An officer and police dog were tasked with searching a nearby residential address in order to assist the investigation.

“Prior to the search taking place, the police dog was released for a short comfort break, as is standard, to ensure the dog is focused on the task ahead.

“During this time, a cat was bitten by the police dog.

“Despite emergency veterinary care immediately being sought, the cat later died. The owner was contacted and informed of the circumstances.

“A complaint has been received and the matter is being investigated by the Met Taskforce Professional Standards Unit.”

He added: “Licensed police dogs are subject to continual training and assessment for obedience, safety and control.

“Licensed police dogs are subject to continual training and assessment for obedience, safety and control.