Couple Cuddle Up To Unusual Pet After Adopting Baby Raccoon

Bethany Swindell and June the raccoon.

A married couple spend their nights in bed cozying up to an unusual pet – their fluffy two-year-old RACCOON.

Although the couple, of Russellville, Arkansas, spotted the baby’s mum in the tree, she did not retrieve tiny June by nightfall. 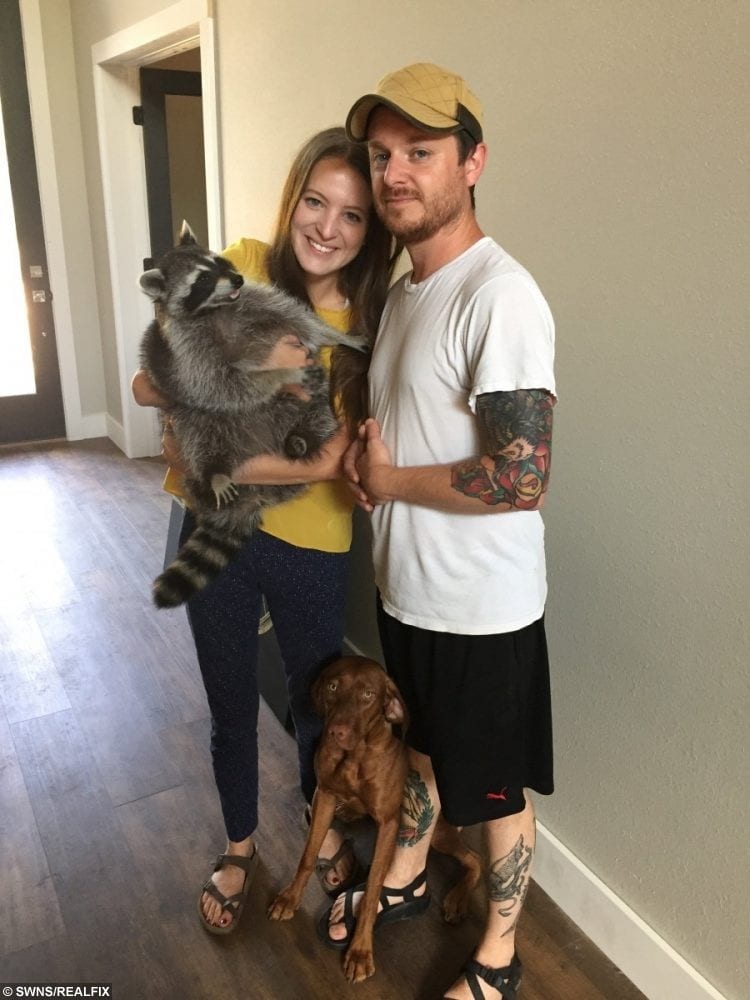 Bethany, a professor at Arkansas Tech University, scooped up one-week-old June who was hairless and the size of a “baked potato”.

A vet check-up confirmed that June was uninjured in the fall, and Bethany and Russ, an electrical supervisor, began to hand rear baby June on milk designed for kittens.

The couple hoped to release June back into the wild, but the raccoon has become too used to home comforts like her owners’ queen bed and her favourite frozen blueberries.

Bethany said: “When we first got her she was so little and she barely had any hair.

“It was two weeks before she opened her eyes, so our vet thinks she was just a week old she we found her.

“A racoon is a mixture between a cat and a dog.

“For instance she lazes around like a cat, and won’t come when she’s called , but she plays rough like a dog.

“She eats dog food and loves to snack on fruits. Her favourite is frozen blueberries.

“We tried to release her into the wild when she was strong enough.

“We put her cage outside with the door open. I know from experience that a lot of rescue racoons get curious and do get the courage to leave, but all June did was cry to come inside.

“She loves home comforts and sleeping in out bed.

“She eats dog food and loves to snack on fruits. Her favourite is frozen blueberries.”

Bethany and Russ added a new member to the family in September 2017, when they brought home puppy Waffles, a vizsla.

Despite the difference in species, the pair became instant pals.

Bethany said: “We got a dog last year, Waffles, and they are best friends.

“They clown around so much and follow each other around the house it’s really sweet.”

Bethany said June is a very social pet, and loves nothing more than a good rub down, even from strangers.

“Sometimes I bring her into work, and everyone wants to hold her and take pictures with her.

“I don’t bring her into class because we’d never get any work done.

“She is so sweet. She’s become a part of our family.”