Lisa Hall and her partner Craig Sketts dog Oliver. See SWNS story SWDOG; A couple have called for urgent change after their beloved dog died of heat exhaustion while cooped up in a car on a ferry. Lisa Hall and her partner Craig Skett were taking Staffordshire bull terrier Oliver on a trip to France. But their holiday turned into a nightmare when ferry company DFDS told them the five-year-old dog had to stay in the car for the journey from Dover to Dunkirk. When they returned to the vehicle later on they found Oliver dead, fearing he had died from heat exhaustion.

A couple have called for urgent change after their pet dog died of heat exhaustion while confined to a car on a cross-Channel ferry.

But their trip ended in tragedy when ferry operators DFDS told them animals had to remain in their car during the crossing from Dover to Dunkirk.

Worried Lisa said she was refused permission to re-enter the car deck after the 4am departure to check on her beloved pet.

When she and Craig returned to their vehicle after the two-hour journey they found Oliver dead with temperatures outside the car of 24.5C.

DFDS said they “sincerely regret” their loss but added that the cause of the five year-old dog’s death on September 5 remains unclear.

But Lisa, a self-employed teacher who had owned Oliver since he was a puppy, is adamant it was because of the heat he was exposed to below decks.

She has now launched a petition in a bid to prevent other pet-owners suffering the same loss.

Lisa, 46, wants the rules changed so people can take their dogs out of the cars while travelling on a ferry.

She said: “You’re told when you purchase your tickets you’re not allowed to take the dog out of the car and you have to park up, open the windows and leave water.

“The temperature even with the ventilation was stifling. I had concerns, it is like leaving a child in a car and we didn’t want to leave him.

“By the time we got to Dunkirk, Oliver had died. We were concerned during the trip but when we asked if we could down to check on Oliver a man said no.

“DFDS said there was suitable ventilation but when we got back to Dover it was 24.5 degrees outside our car on the ferry. It was boiling down there.”

Lisa, from Calne, Wilts., wants it made easier for passengers to check on their pets during voyages.

She also says ferry companies should provide a segregated area on board for people to travel with their animals.

She added: “My partner is still in shock. It still hasn’t dawned on him and the loss is hard to describe.

“It has been really traumatic and we urge other people to check ferry company’s procedures before booking.

“If I left my dog in the car and he died, I would be prosecuted. So why can’t the ferry company be prosecuted?

“One dog death should be enough for a change so it doesn’t happen again.” 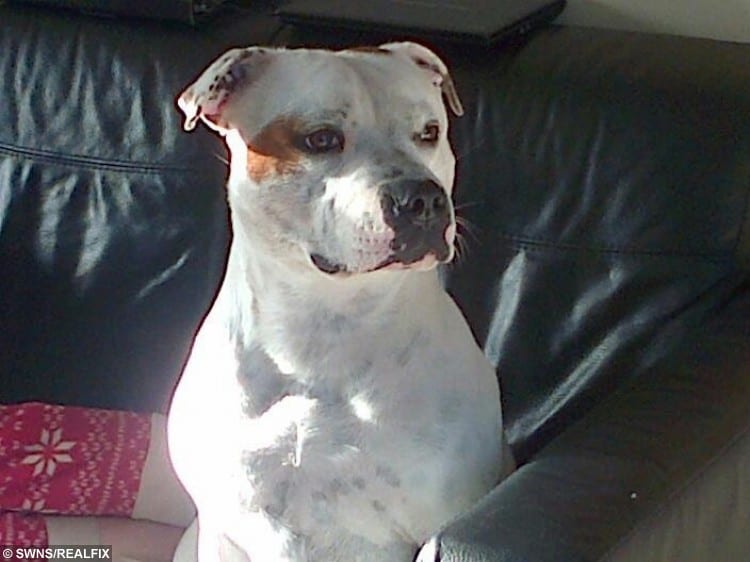 The ferry company provides advice for passengers travelling with pets, claiming it provides “simple and safe” transportation for animals.

They charge £15 per pet each way for the service and say passengers car visit their pet during the crossing if accompanied by a crew member.

A statement from DFDS said: “We sincerely regret the sad loss of Ms Hall’s pet dog, Oliver, during the family’s recent journey on our Dover to Dunkirk service.

“Our initial investigation indicates that Ms Hall’s vehicle was parked in a well ventilated area of the car deck, with the windows open to assist with airflow, as our policy on the carriage of pets advises.

“The cause of Oliver’s death is unclear. We are currently reviewing our procedures and will include learning points from this incident in this process.”

Lisa said she has rejected an offer of a free crossing as compensation from the company and ‘wanted justice’ instead.

Oliver the Staffordshire bull terrier isn’t the first dog to die while on a Channel-crossing ferry.

In 2014, the Wallace family from Brookwood, Surrey, were told they would not be able to sit with their three dogs during the P&O trip between Dover and Calais.

When they returned to their car they found Merlin, their beloved four-year-old pug, was unresponsive.

Despite their attempts to resuscitate Merlin, he tragically died – but the family’s other two dogs were fine.