HomeAnimalsMost PopularCourageous Cat Enjoyed A 1,500 Mile Road Trip After Stowing Away In Her Owners’ Caravan When They Went On Holiday To France 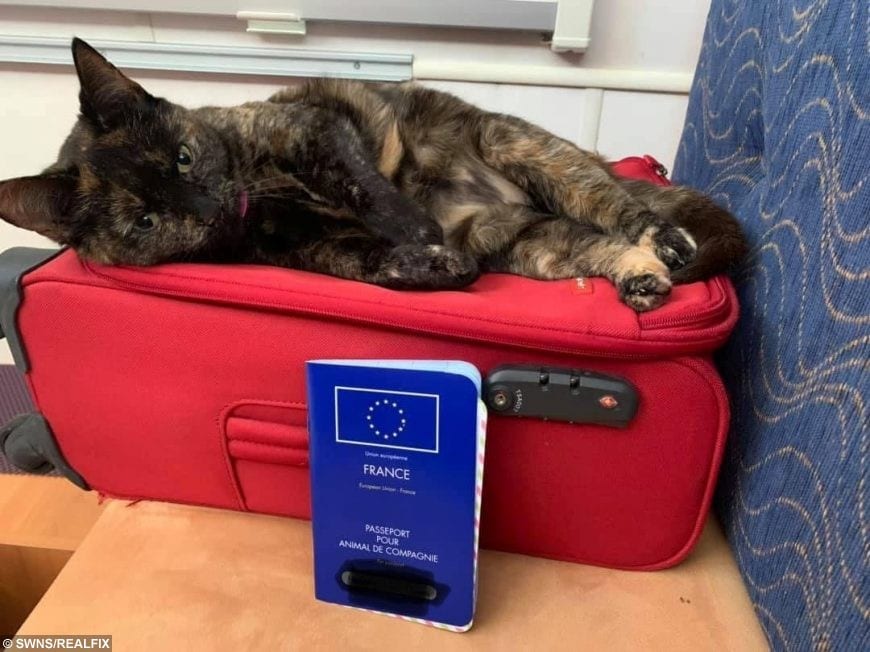 A courageous cat enjoyed a 1,500 mile road trip – after stowing away in her owners’ caravan when they went on holiday to France.

Jane and Paul Brown thought they had left their beloved feline at home in Leeds, West Yorks., when they set off for a week-long holiday last month.

But after arriving in Europe on a ferry 24 hours later they were stunned when their eight-year-old cat Squish crawled out of a storage area as they ate lunch.

They took her to a vet, where they had to fork out £500 for a rabies injection and pet passport.

Because of the jab, Squish was not allowed to leave France for three weeks – so Jane had to fly back home as planned and Paul had to remain in Europe with the pet.

The pair were in France during the hottest period in the country’s history, so Squish was kept cool with wet J-cloths, cool packs and a fan.

Jane and Paul, both aged in their 50s, had reached Lille and Reims in the north of France when Squish was discovered in the first week of July.

They continued to Troyes and Autun in the south of the country – their original holiday destination.

They then travelled north again to Le Touquet to try to avoid the heat before taking a ferry to Hull, East Yorks., from Zeebruge in Belgium.

Jane, a Reverend at St Mary’s Church in Garforth, said they were worried Squish might fall seriously ill because of the scorching temperatures but that she’s back to her inquisitive best in temperate West Yorkshire.

She added: “We set off on holiday and unbeknown to us the cat had stowed away in the caravan.

“Squish is a very nosy cat so she must have gone inside to take a look before Paul shut the door without realising.

“When she came out to say hello she looked very pleased with herself.

“We were really worried and thought, ‘oh my goodness, what are we going to do?’

“She was obviously really hungry so we got her some food then rang our local vet for some advice and went from there.”

Jane added: “It was bad luck that Squish and Paul had to be there during the heatwave.

“He kept her cool with ice packs on top of and below her body and he also used a fan.

“During the day she just had to lie down and do nothing, she could only really get up for a drink or some food.

“In the evening when things cooled down she was a bit more lively.”

Over the course of three weeks Squish racked up an incredible 1,500 miles, which is the same distance between her home in Leeds and Moscow in Russia.

The trio took a ferry from Hull, East Yorks., to Zeebruge in Belgium before driving to Lille and Reims.

They then headed south to Troyes and Autun before Jane got a flight back to the UK from Paris.

Paul and Squish went further north to Le Touquet to try and escape the heat before travelling back to Zeebruge to catch the ferry home.