Lou Rodchenkova and her her dog Jack, who work at The Fuzzy Dog Bakery in Whitby, North Yorkshire. It specialises in home-made treats for dogs including beefcakes, porky rolls and bloody bats. The treats, baked by Lou are free from additives and preservatives unlike many shop-bought dog treats. Owners wanting to but their dogs quality, clean products is growing in the UK. October 26 2015.

A dog-lover who believes that canines deserve the finer things in life has taken matters into her own hands – by opening up a doggy BAKERY.

Lou Rodchenkova, 44, had the idea for The Fuzzy Dog bakery after realising that her German Shepherd cross Lilliya didn’t like mass-produced chewy sweets.

She began experimenting with her own recipes to satisfy Liliya’s sweet tooth, and before long, realised that there was a demand for gourmet treats.

She decided to give up her job working in child protection in London to move to the seaside town of Whitby, North Yorks., to open up a market stall selling her bakes.

Now she has opened up her very own shop, where dog owners can find something to satisfy even the fussiest of pooches.

On first glance, the shop could be mistaken for a human bakery – with delicious smells wafting towards customers as they walk through the door.

A counter displays different shapes and flavours of biscuits, cakes and gingerbread men.

But on closer inspection, it’s clear the bakes are suitable for doggies only.

The biscuits and cakes, shaped like bats, skulls, stars, hearts, farmyard animals and bones, are actually made with flavours including fish, pork, beef and liver.

What could be sausage rolls are actually ‘porky rolls’ – a roll of pig skin.

On top of the counter are dog bowls filled with biscuits and bowls on the floor provide refreshment for pooches who are welcome in the shop.

And canine accessories are also on sale, including toys and neckerchiefs.

Lou, originally from Sydney, said: “The reaction so far has been really, really good. It’s not just treats that I’m selling – I have all kinds of doggy gifts.

“The shop has been really busy so far and my bestselling Halloween treats are definitely my Bloody Bats, made out of chopped liver.

“I make all the treats in the shop myself. It’s not just savoury chews either – I have lots of sweet things, all made with natural ingredients like honey and peppermint – but no sugar.”

There are no additives in any of Lou’s bakes – and they look so enticing that some have even mistaken the bakery for a human one.

Lou said: “I had a lady come in the other day to tell me what a lovely bakery it was, she didn’t realise it was for dogs. Humans could eat the treats too but they wouldn’t taste as nice to us!”

Whilst Lou’s dog Lilliya sadly died a couple of months ago, her new pooch, German Shepherd cross Captain Jack is now the lucky recipient of Lou’s bakes – and he isn’t the only one enjoying them.

“Captain Jack is probably the biggest dog I’ve had in the shop, and the smallest was a little chihuahua,” said Lou. “We have had lots of dogs come to visit. Dogs are so loving and faithful, they’re there for you when you come home and always listen to you.”

“My family and friends think it’s great. Some have even said they always knew I’d end up working with dogs as I love them so much.” 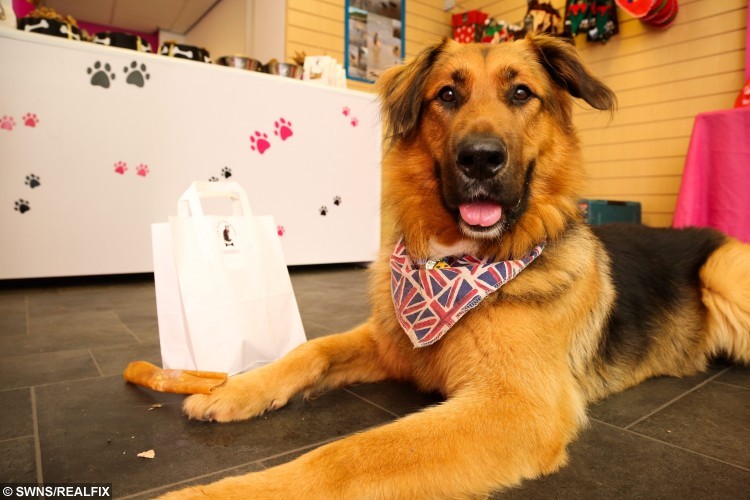 Man wakes up after donating liver to a friend and gives girlfriend his heart!