This is the moment much-loved Dartmoor Hill ponies were served up at a farmers’ market – as burgers and SAUSAGES.

Visitors were shocked to find the popular species being sold as an unusual delicacy at the event.

But farmer Charlotte Faulkner, who set up the Dartmoor Hill Pony Association and came up with the idea, defended the scheme – and said it was the best way to protect its future.

She said hundreds of ‘excess’ ponies were currently being culled each year to keep a constant number on the moor – and the meat was being sent abroad for human consumption or fed to other animals.

Charlotte, 55, was pictured at the stall with fellow Dartmoor farmer Mary Allford at the Tavistock Farmers’ Market on Saturday and said that despite the controversy the meat had proved popular. 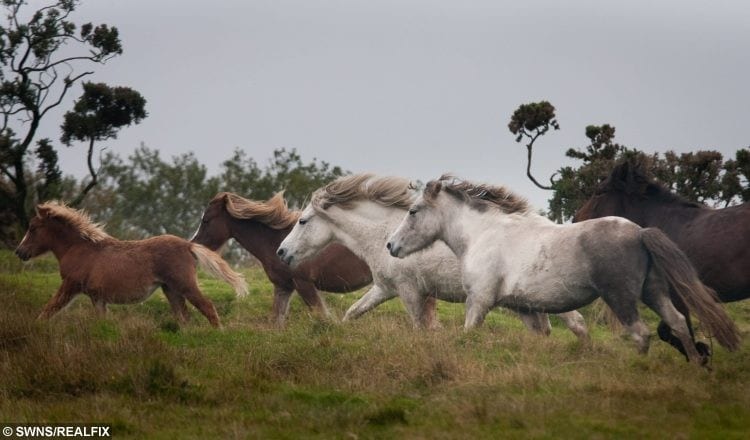 As well as now being available at the twice monthly market, it can also be bought online or at three local pubs.

Charlotte said the idea was to create a meat market for the older ponies to stop the foals being shot at birth.

She insisted she was only returning to old practices used in days gone by, when the excess ponies would be sold for meat locally.

She added: “People travel to us to buy pony meat and we even have return customers.

“People seem to be surprised to see pony meat but they do understand what we are doing.

“The pony meat is high in protein and low in fat – everything we look for in food.

“It is also important to add that we will never breed ponies for meat.”

The pony meat stall is run by Dartmoor Conservation Meat, a co-operative of various organisations.

It is one part of a pony herd management plan which includes selling ponies to be trained and domesticated to become riding or driving ponies and using mare contraception to match the number of foals born to the number of ponies sold.

Farmers are also being encouraged to look for new ways of increasing value to the ponies to avoid the culling of the ponies at under a year old.

Charlotte says that selling their meat and training them to become riding and driving ponies are ways in which farmers can justify keeping them.

She added: “The size of pony herds kept on Dartmoor is recommended by Natural England, the government’s guardians of Dartmoor’s biodiversity.

“These recommendations must be kept to. Up to 750 foals will be born each year and 300 foals will be homed, with difficulty, to become future riding, driving or companion ponies or to join conservation grazing herds.

“50 foals go back onto the moor with the herds which leaves an excess of 400 foals which are shot. This is not acceptable

“Three year old ponies have more value to buyers than foals as they are the correct age to train.

“A farmer, knowing that there is a meat trade as a fall-back, is more confident keeping that pony until that age so the chance of a foal growing and being trained for life is improved.”

Driver Lucky To Be Alive After Wrapping Car Around Lampost

Driver Lucky To Be Alive After Wrapping Car Around Lampost