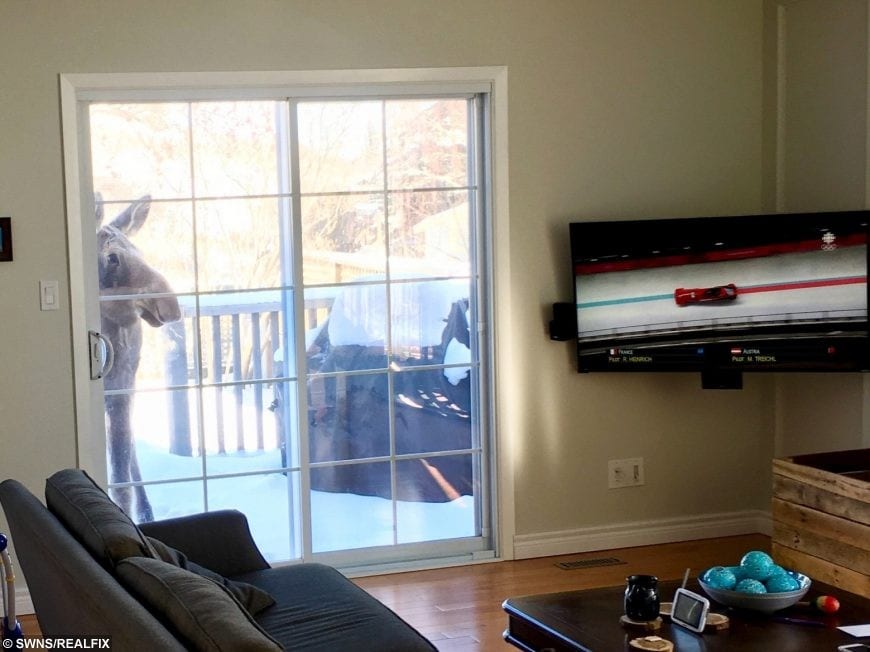 A moose proved to be a good sport as he was pictured peering through a man’s window just in time to watch Canada take home a gold medal in the Winter Olympics.

The yearling joined Matt Duncombe, 32, to catch the Canadian Olympic team take part in the bobsleigh race – peering through the glass at the TV.

He posted a picture to Twitter saying: “#CBCOlympics Your coverage is attracting a diverse audience. #MooseareCanadianstoo.”

His tweet was re-tweeted thousands of times – even attracting a response from Team Canada.

They replied to him saying: “Lol bobsleigh game so strong even moose want to watch.”

Matt is used to seeing wildlife in the back yard of his home in Calgary, Canada, with many including coyotes, deer and moose making an appearance.

But it was the first time he got so close to one of the wild creatures after the moose suddenly arrived to watch the bobsleigh in action.

After getting a piece of the action, the antlered beast moved away from the glass and began grazing in Matt’s back yard.

Matt, a salesman for an oil and gas service company, added: “Growing up in the Boreal forest of Canada, moose are never far away.

“We are used to them being around, but never quite so close up and personal.

“Showcasing a true Canadian moment to the world has been quite amusing.”

Bobsleigh is a winter sport invented by the Swiss in the late 1860s in which teams make timed runs down narrow, twisting, banked, iced tracks in a gravity-powered sled.

There are four events currently being held at the Winter Olympics in PyeongChang – the moose being lucky enough to catch the two-man bobsleigh earlier this week.