A flea-ridden cat who was feared blind after being rescued from the streets has revealed a dazzling set of two-toned eyes – just like David Bowie.

Cotton the cat was suffering from a skin condition that meant his eyes were crusted shut with scabs – and nobody could see his kooky beauty.

But after being cared for by vets, he was found to have a pair of striking pupils, one blue and one yellow.

Carmen Weinberg, who runs the Animal Friends Project in Florida which found Cotton, said: “He had been walking outdoors completely blind.

“He purred the whole time they were examining him.

“It was a nice surprise to see that he had one blue eye and one yellow eye.”

The cat has made a number of changes in the last year – recovering from parasitic skin condition mange.

Cotton was taken in by Carmen after he was spotted wandering around in a dire state last September.

By December his fur was completely grown back and looking hunky dory.

The beautiful cat has now been attracting attention worldwide on social media.

He turned out to have a microchip which allowed his old owner to be traced. 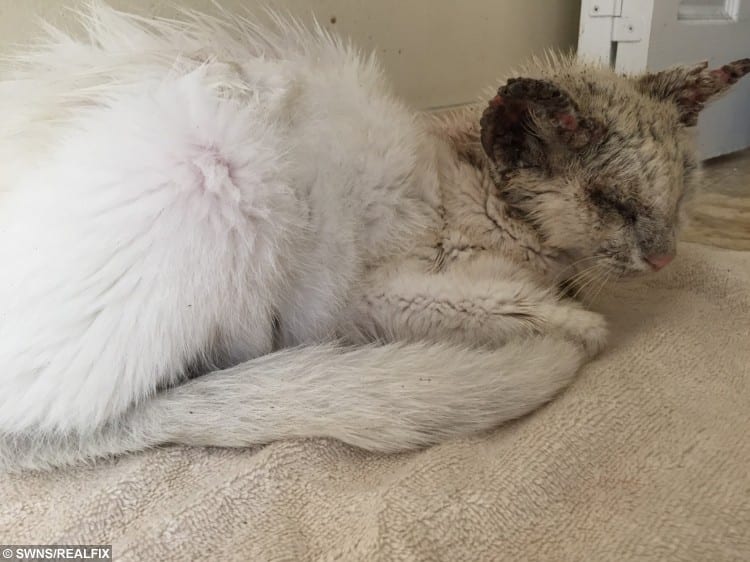 However once they were tracked down they said Cotton disappeared a long time ago and could no longer live with them.

The affectionate kitty is now up for adoption.

He would do better in a home with no young kids due to his predilection for giving “love bites”, Carmen said.

“He is very vocal and comes to you asking for love.

“He could get overstimulated and give love bites but he usually controls himself.”

She added the ideal home for Cotton would be a “quiet home” without children or other pets, where he has some access to the outside.

You can find more details about Cotton and Animal Friends Project’s other adoptable cats at http://animalfriendsproject.org/adoptable-cats/