This is the adorable moment a hungry deer gatecrashed a picnic and helped himself to the goodies.

This is the hilarious moment a hungry deer trashed a charity picnic before stealing fruit and sandwiches from the food basket.

Families with young children were sent diving for cover as the crazed stag trampled across the picnic rugs in search of tasty treats.

Dramatic pictures and video show the animal waving its 3ft-long antlers in the air as it scoffed goodies meant for the group.

The animal gatecrashed the picnic which was organised by twin sisters Hannah and Rachel Towlson, 27, on Sunday (9/9) afternoon.

The sisters, from Stapleford, Nottingham, put on the spread for around 20 people in aid of their charity which aims to raise cash for disabled children in Tanzania.

But they were forced to abandon the event at Wollaton Park, Nottingham, when the stag went on the rampage as they tucked into the food.

Hannah, a care assistant at a children’s hospice, said: “He definitely provided some entertainment.

“Me and Rachel are both a little bit scared of deer so we set up the picnic well away from him.

“We had seen him earlier day on his own but he was lurking in the background and kept his distance but he kept getting closer and closer.

“Suddenly there was the sound of hooves getting louder and louder and he trampled over the picnic blankets. 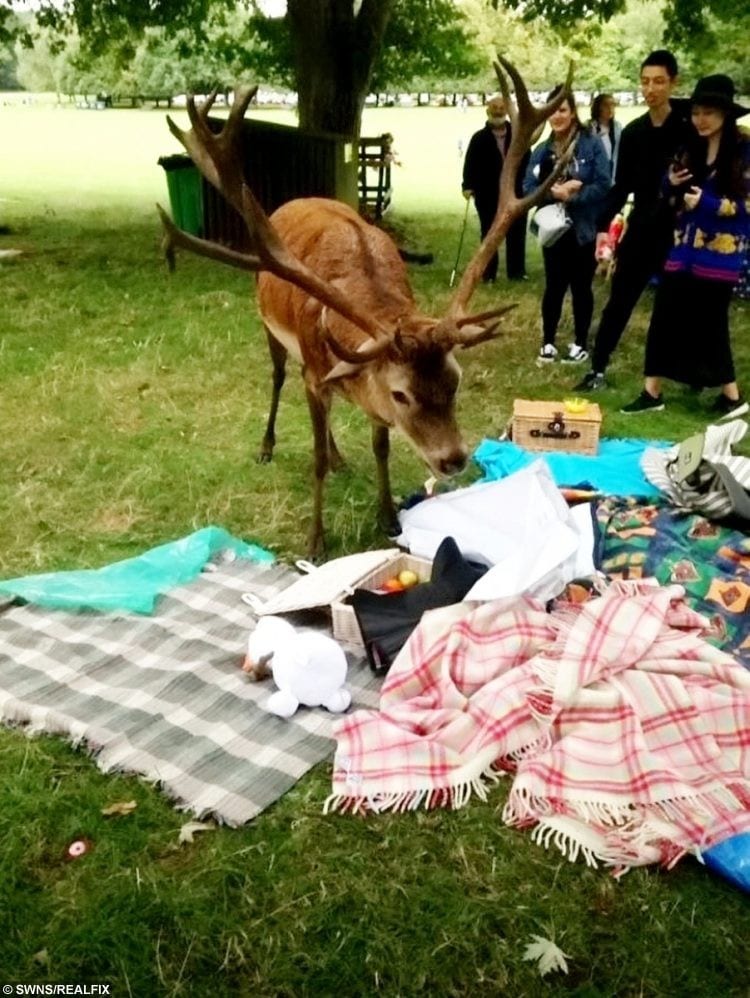 “He was very keen to get to the food. Everyone just leapt out the way and we just had to let him do what he wanted to do.

“After he found the picnic basket he put his face into it and ate all the fruit. After he
filled his stomach he simply walked away and had a nap.”

Despite the interruption, the sisters managed to raise £150 for their charity, called Thrive Village UK.