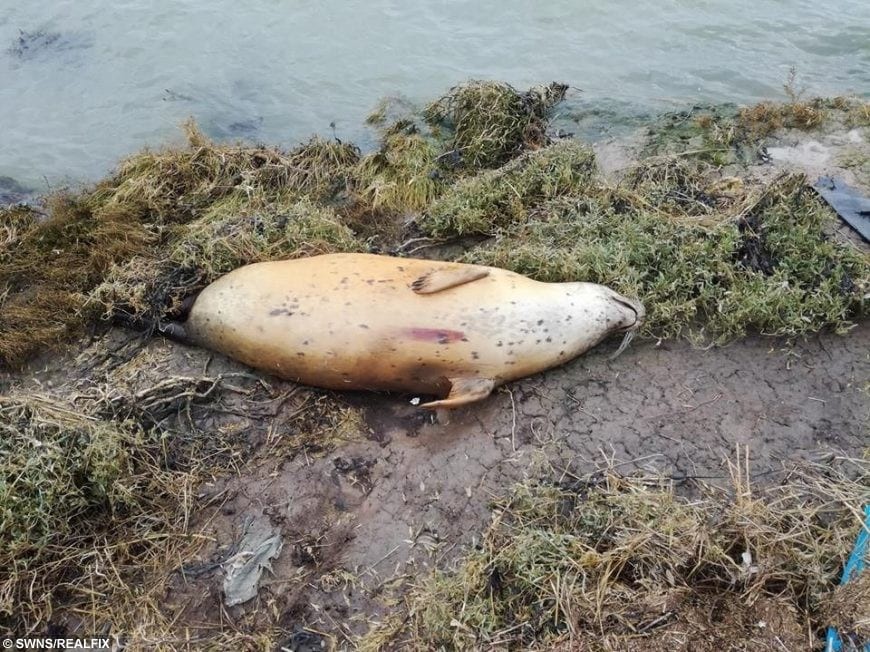 A pregnant seal whose body was found washed on a river mudbank had been deliberately shot in the heart with a rifle, it emerged today.

The discovery of the bodies of two pregnant common seals in the backwaters of the Walton Channel, Essex, sparked outrage and an appeal to find their killers earlier his year.

It is suspected that the animals were deliberately killed by anglers who were angry that they were interfering with their fishing.

A reward of £3,000 was also offered by Sea Shepherd UK, a conservation charity which aims to prevent and discourage the illegal killing of seals.

Now, voluntary group Essex Marine Mammal Rescue and Research has announced the findings of a post-mortem – or necropsy – on the body of one of the seals.

A spokesman said: “Back in January two dead seals were found with what looked like bullet wounds.

“One of the seals was taken to Cetacean Stranding Investigation Program (CSIP) based at London Zoo for a necropsy to be carried out.

“It was confirmed that all assumptions regarding the death of the seals were in fact correct.”

A report written by Rob Deaville from CSIP said: “This adult seal was in very good nutritional condition at death and was also pregnant with a two to three month term foetus.

“It had been reported stranded along with another common seal and various reports linked the deaths to shooting.

“The examination found the cause of death to be consistent with shooting, with a single entry wound between the fore flippers.

“The bullet had penetrated part of the heart and the edge of the left lung.

“The bullet was recovered during the examination and appeared to be largely intact.

“It was provisionally identified as a .22 calibre from the width and has been retained.”

Tony Haggis, who runs tours of the backwaters, found the dead seals at the time.

He said: “It’s so sad, I wait 12 months to see the mothers give birth.

“We believe four were seen dead in the water by angler but only two were found washed up.

“Unfortunately they don’t have evidence of who did this and it’s gone cold.

“But by being public those who did it know everyone is watching and looking out.”

Tony said there are currently lots of seal pups in the backwaters though he believes some were born prematurely and died, which he says is down to people disturbing and distressing the mothers.

He added: “I try to tell people to keep their distance and not to disturb them, it’s very important they are allowed to rest.

An RSPCA spokesperson said: “We applaud the efforts in trying to find out what happened to the seals, and urge anyone who might have any information to get in touch as soon as they can.”