HomeAnimalsMust Read‘Life Just Isn’t Full Without A Dog In It – Right?!’ -Friends Who Posted A Letter To Their Neighbour Asking To Take Their Dog For ‘Walkies’ Got Adorable Note Back 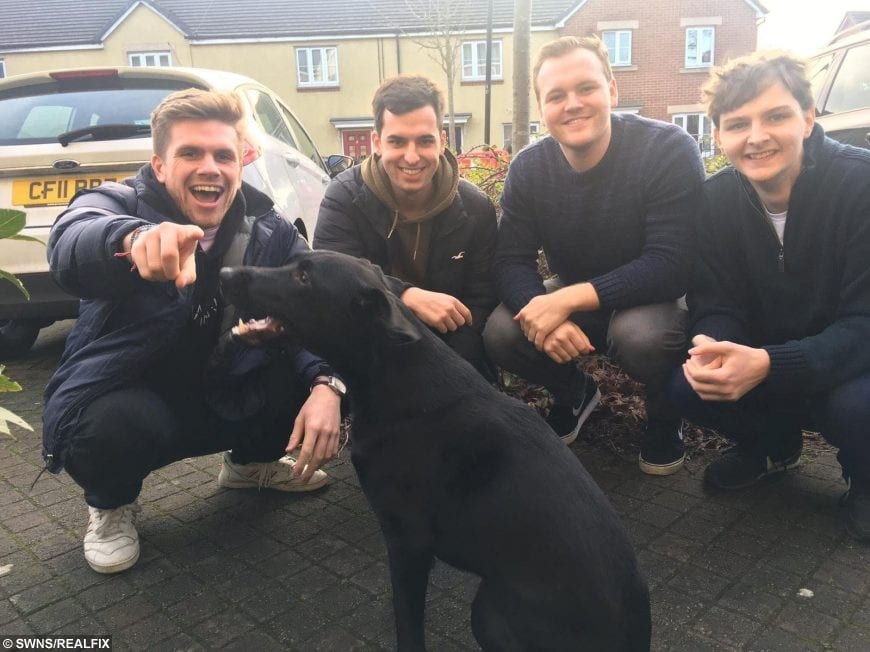 Four friends who posted a letter to their neighbour asking to take their dog for ‘walkies’ got this adorable note back – from the pet.

The ‘boys from 23’ – Jack McCrossan, Chris Fleetwood, Iwan Buckingham, and James Nicks – started pining for a dog when they saw next door’s ‘Stevie Ticks’.

Forbidden from keeping a pet inside their rented flat, the engineering grads penned a letter to their neighbour, asking to walk the Sheprador.

Three days later, an envelope addressed to ‘the Boys’ fell through their letterbox – with a black paw print stamped on the back.

Inside, astonished Jack, Chris, Iwan, and James – all aged 22 or 23 – found a gushing note from Stevie Ticks, asking to be friends with her neighbours.

The Sheprador, a German Shepherd Lab mix, demanded – amongst other things – five games of fetch a day, and “belly scratches whenever I demand them”.

Steve Ticks also revealed that she was a rescue dog from Cyprus, and said “life just isn’t full without a dog in it – right?!”.

Last week (15), the ‘boys from 23’, in Bristol, took two-year-old Stevie Ticks on her first walk – marking what Jack called “the start of a beautiful friendship”.

Speaking on behalf of the group-of-four, Jack said: “Stevie is exactly as described in the letter – very energetic and puppy-like, she was running about constantly!

“We got to take her to a nearby park to play about and throw the ball for her!

“Chris and Sarah have both been great about the whole thing, and I think they’ve been as excited about it all as ourselves!

“Stevie’s Instagram has become very popular now, where Chris and Sarah have been keeping it updated for all her new fans!

“We got the response on the 9th, just as I was heading out the flat.

“The others were already out, but I was in a rush, so I didn’t have time to open it – we were left anxiously waiting to read the note the whole day!

“We’d seen Stevie next door sometimes, but weren’t too sure if she belonged to the neighbours or whether they were just looking after her from time to time.

“We came back home one night to be greeted with her staring out the window at us and then assumed that she must be a permanent member of the house.

“My housemate Iwan kept saying he was going to write a letter asking if we could walk her, which he got round to doing on 6th December.

“We fancied the idea of having a dog in our lives away from home and that we could have an excuse to go out for walks around the neighbourhood.

“Also, we agreed that life is just better in general with dogs about!”

Jack and his pals sent a letter to Chris and Sarah McVie next door on December 6 after seeing Stevie Ticks out and about in the shared building.

Signing off as ‘the boys from number 23’, their letter read: “Dear neighbour,

“We are four engineers that have recently moved into the area in the past 3-4 months.

“Our house is comprised of an Englishman, two Scotts and a Welshman. Diversity.

“The other day, we noticed a four-legged friend looking at us out the window when we arrived home from work.

“He or She looked like the good-est boy/girl there is.

“If you ever need someone to walk him/her, we will gladly do so.

“If you ever get bored (we know you never will, but we can dream) we are more than happy to look after him/her.

“If you want to come over and bring him/her to brighten up our day, you are more than welcome.

“If you want to walk past our balcony windows so we can see him/her, please do.

“We hope this doesn’t come too strong, but our landlord won’t allow pets, and we’ve all grown up with animals.

“The adult life is a struggle without one.

“We look forward to hearing from you. Or not.”

“What a treat it was to receive your letter!

“On the subject of treats, I like them a LOT.

“Big ones and meaty ones and cheesy ones … oh sorry … where was I?!

“I am two years and four months old, and I am a Sheprador (Lab x GSD).

“I come from Cyprus originally but Chris and Sarah rescued me from a cage in the ‘doggy hotel’.

“You’re right that I am the best-est girl – how did you know??

“I am very friendly and full of beans.

“I love meeting new people and it would be great if we could be friends.

“I must warn you that the price of my friendship is 5 x ball throws a day and belly scratches whenever I demand them.

“We here understand how hard it is to find pet friendly rentals – and life just isn’t full without a dog in it – right?!

“I’d love to hang out whenever you fancy.

“Give my servant Chris a WhatsApp and we can arrange a meet up!”