Look into my eyes! Are you hypnotised by the adorable Ozzy?

Ozzy the 8 year old cross eyed cat from Perth.See Centre Press story CPCAT; These are the pictures of a ÃdaftÃ cat who who has a striking resemblance to the "hypnotised" panther in Disney's The Jungle Book. Ozzy, the eight-year-old moggy, became cross-eyed when he feel from a windowsill when he was just a kitten. It lives with owners Ian, 57, and Evelyn McDougall, 61, and regularly found sleeping but is not a stranger to sneaking out to see what lies outside the house in Perth.

These are the bizarre pictures of a cat which was left with a permanent “hypnotised” look after falling from a windowsill.

Ozzy, the eight-year-old male moggy, became cross-eyed after falling from a window as a little kitten.

But its owners say the “daft” feline now has a striking resemblance to panther Bagheera — from Disney’s film The Jungle Book — which was hypnotised by the snake Kaa.

The cat lives with Ian, 57, and Evelyn McDougall, 61, in Perth, Scotland, and is no stranger to sneaking out of the house and exploring the neighbourhood.

But the couple reckon his impaired sight has led to him getting lost on several occasions.

The tom was recently found wandering through a car show room when it escaped as the front door had been left open by accident.

Luckily, the moggy was discovered by staff in an Arnold Clark garage and reunited with its owners who contacted the Scottish SPCA. 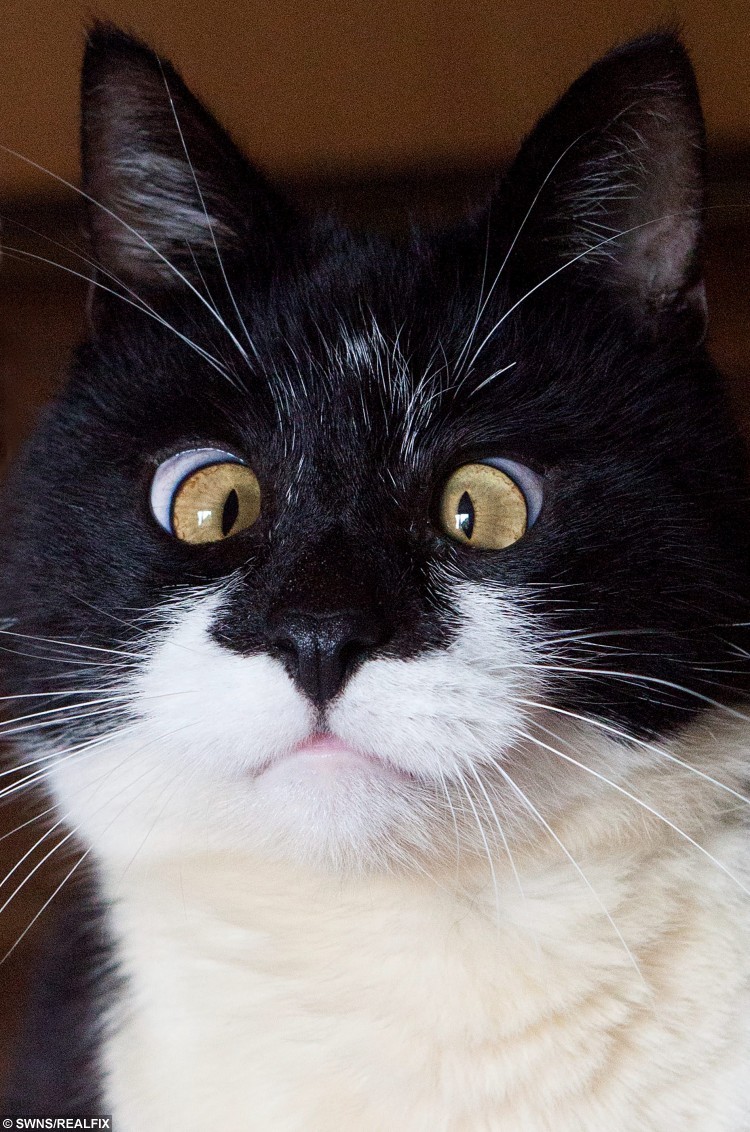 Ian, who is a full-time carer for his son Connor, 16, who has Hunters disease type two, said: “He looks like the panther from the Disney movie when you see the eyes.

“Ozzy fell off a windowsill and we reckon he dunted his head then. That’s when me and Evelyn took him in because he was the runt of the litter.

“I think he’s got tunnel vision, he can look at one bit and then it’s a bit further away.

“It’s very comical when he’s chasing a fly. He’s got real character about him.”

“He’s a bit daft at times but he is very friendly. He’s definitely a house cat.”

“The condition doesn’t hinder him in the house, he’s used to the house. He can run up and down the corridor.

“But my son left the door open when he was waiting on the school bus and he must have sneaked out in beside the floor pots and we mustn’t have noticed.

“We were very relieved to have found him.

“The SSPCA put it up on their Facebook and I said ‘that’s my cat’.

“Since he came home he’s started to sleep in our bed, I don’t know if it’s for security.

“He escaped three years ago but we found him later up the street petrified.”

GRAPHIC! Mum nearly loses her leg after a SPIDER bites her in BED

Prepare to be blown away by the reason behind this boy’s first EVER haircut!

Prepare to be blown away by the reason behind this boy's first EVER haircut!