Video grab of Dariusz Jakimowicz beating a dog called Zeus. See Masons copy MNWHIP: A father who admitted beating up his German Shepherd using 'frightening' training methods has been spared jail. Neighbours of Dariusz Jakimowicz, 34, described hearing 'whipping noises' coming from his home on a daily basis as the dog 'yelped' and 'screamed' out in pain. They managed to catch him on camera punching the animal named Zeus, before battering it with a metal pole as it tried to get away.

A father who admitted beating up his German Shepherd using ‘frightening’ training methods has been spared jail.

Neighbours of Dariusz Jakimowicz, 34, described hearing ‘whipping noises’ coming from his home on a daily basis as the dog ‘yelped’ and ‘screamed’ out in pain.

They managed to catch him on camera punching the animal named Zeus, before battering it with a metal pole as it tried to get away.

One, who recorded the abuse on her mobile phone, told Luton Magistrates she ‘heard a puppy crying and in distress’ after moving in next door to Jakimowicz in April 2016.

She said: “I own a dog myself and I know the difference between a playful noise and the sound of a dog in pain or distress.

“I would hear the dog sounding in pain or distress on a regular basis.

“As a result of this I decided to try and capture what was happening on my mobile phone.

“I heard whipping noise and a dog crying out of my window and saw a male with a large plastic stick in the rear of a property near my own.

“I saw the man advance towards him with the stick twice and heard whipping noises and heard the dog cry out. It was a high pitched cry and it is a sound I never want to hear again.

“I heard the whipping noises and the dog’s crying coming from inside the house on a regular basis.”

A second video shown to the court, taken by another neighbour, showed Zeus cowering in front of a large hole in a garden fence and being punched by Jakimowicz.

In a statement read to the court, the female neighbour said: ” I was in my bedroom and heard a dog crying.

“I went to my bedroom window and saw a man I know to be my neighbour with a dog, a German Shepherd.

“He was standing side on to me so I could see his face and easily identify him as my neighbour.

“I watched the man holding the dog by the scruff of his neck and I saw him hit the dog in the body area and punch him with clenched fists.

“The male punched the dog 10 to 15 times. The dog responded by crying out, he wasn’t fighting back.

“We could heard the dog crying out on an almost daily basis.”

The court heard how following the allegations, the dog was removed from Jakimowicz on September 6 last year and taken to a vet for assessment.

Jakimowicz initially denied using any excessive force against his pet and claimed the sounds heard by his neighbourswas him ‘playfighting’ with his pet.

He said ‘whoever had made the complaint must be jealous’ of him owning the dog.

Jakimowicz later admitted to RSPCA Chief Inspector Melanie Fisher that he had hit the dog with rolled up newspaper during training but said ‘he couldn’t see anything wrong with that’.

But when shown the video footage captured by his neighbour, Jakimowicz claimed to have been ‘really angry’ because the dog had chewed a hole through his fence.

He maintained that he had only lost him temper with the dog on to occasions and said the family who took the video ‘must be jealous’.

In a statement read out to the court, vet Daisy Sutton said: “It is my opinion that this animal has been caused unnecessary suffering and has been physically and mentally abused by his caregiver.

“He has been subject to unnecessary suffering, discomfort and fear.

“I am concerned he has been subjected to unnecessary negative reinforcement and training involving both physical and mental abuse.

“The abuse is likely to have been sustained over a long period.” 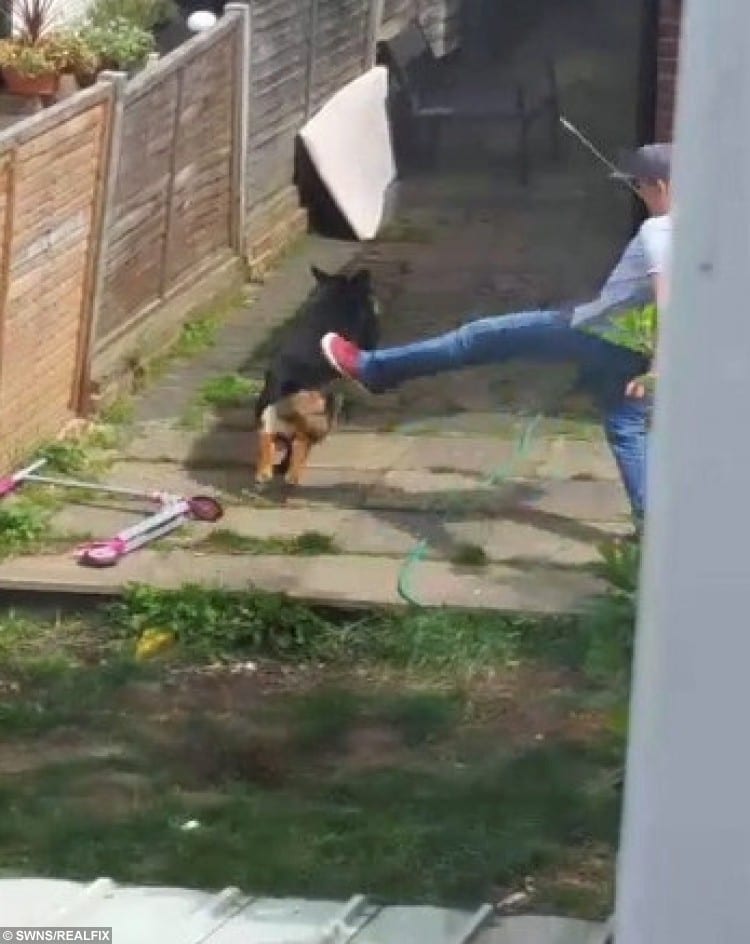 The court heard how Zeus is currently being kept in kennels and under assessment to judge whether it has recovered from the mental abuse he suffered and is suitable for adoption.

Warehouse worker Jakimowicz of Luton, Beds., pleaded guilty to failing to prevent unnecessary suffering to an animal under the Animal Welfare act.

The defence told the court how Jakimowicz, who has two young daughters, had ‘shown remorse’ for his actions and that ‘if he could go back and change things, he would not have done it.’

On Tuesday, Magistrate chairman David Thew sentenced Jakimowicz to 12 weeks in prison, suspended for 12 months and disqualified him from owning any animal for five years.

Sentencing him, Mr Thew told Jakimowicz: “We find you have caused unnessecary pain, discomfort, distress and suffering to Zeus.

“The aggravating factors are your use of a weapon, your attempts to minimise the abuse you cause Zeus, and the prolonged period of sustained abuse.”

Speaking after sentencing, RSPCA Chief Ins Fisher said: “I am pleased with the outcome of this case and the serious nature of what happened has been recognised.

“It shows that using excessive force against animals is totally unacceptable and will be punished.”

Welder's Thumb Torn Off When Glove Gets Caught In Drill Machine