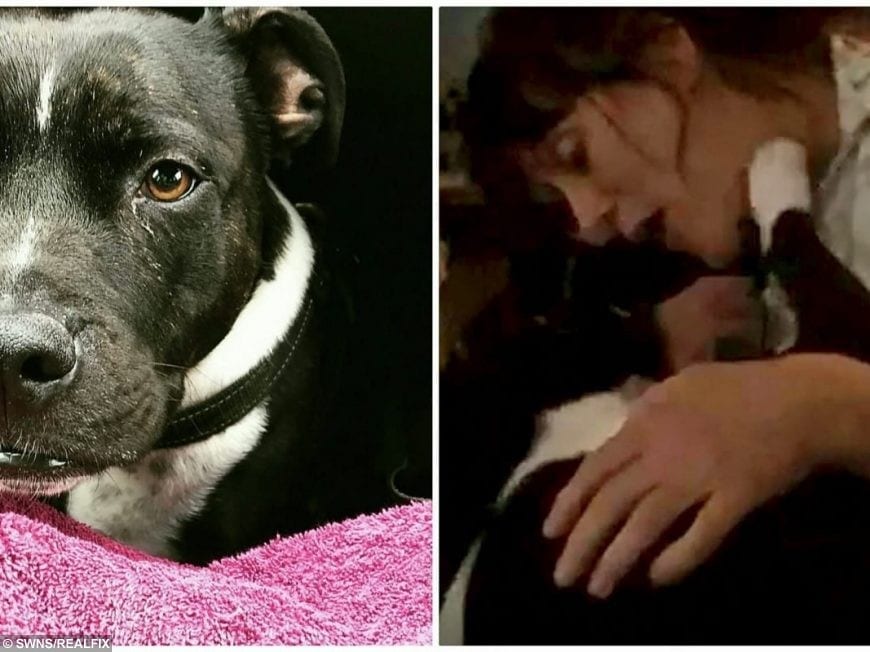 Meet the clever dog who can actually say ‘HELLO’ to greet his owner.

George, six, gets so excited when he’s around people that he tries to join in their chat and says ‘hello’ until he makes them laugh.

Owner Kathryn Schofield, 36, said he started barking the word two years ago out of the blue and she has repeated the word to him until he got it perfect.

This adorable video clip shows George, a Staffy, snuggling up to Katheryn and repeating the world ‘hello’ three times.

Play cafe owner Kathryn, from Weymouth, Dorset, said: “He’s been saying ‘hello’ for a while, but it’s hard to catch it on camera because as soon as you get a camera out, he gets excited.

“He comes right up to the camera and sticks his face in it, like a real poser.

“George basically tries so hard to talk, mostly when he’s excited when you come home from being out, or when visitors come round – and it’s then I can get him to say it.

“He loves attention – but it’s hard not to forgive a one in a million dog!”

George, who was rescued from a dog home in May 2013 at six-months-old, has suffered with elbow dysplasia and had a cancerous tumour removed.

He started saying ‘hello’ two years ago and will now tqalk to order.

“I just kept telling him to say it and eventually it really started to sound more and more perfect,” Kathryn said.

She said that George “is a big softie who loves anyone” and dotes on her three kids Albert, 10, Eddie, four, and one-year-old Violet.

Kathryn said his chatty nature has made him popular with locals.

She said: “I go to the local cafe and people I’ve never met will tell me that they’ve heard all about George and how lovely he is.

“People love him because he’s not got a mean bone in his body. He’s an all-round sweetheart!”