X-rays showing the needle that Peaches the kitten from Blackpool, Lancs., swallowed. A kitten nearly lost one of it's nine lives after swallowing a four centimetre long sewing needle. Peach the mischievous six month old short-haired white cat got more than she bargained for when she decided to play with a piece of thread while the needle was still attached. See Ross Parry Copy RPYNEEDLE. 14 October 2015.

A kitten bit off more than she could chew when she swallowed a sewing NEEDLE while chasing after a piece of thread.

Mischievous moggy Peach nearly lost one of her nine lives when she got the sharp four-centimetre needle lodged in her throat.

Hearing her tiny pet scream, owner Natalie Warburton rushed her to her vets, fearing for her kitten’s life.

Natalie, 24, said: “I was sitting on my bed when I heard a high-pitched scream from the floor.

“I ran around and saw Peach on the floor with black thread hanging out of her mouth.

“She was choking and I put two and two together and realised what she’d done.

“I pulled the thread out of her mouth but then I thought ‘what if there was a needle on the end of that?’

“I couldn’t see any sign of it so I rushed her to the vets so they could check her over.”

Staff at Vets4Pets in Holyoake, Bispham, Lancs., quickly X-rayed the six-month-old kitten, revealing the needle lodged in her throat.

“I couldn’t believe it when I saw it, so clearly as well,” said Natalie.

“I felt sick because it just looked so painful. It was just there sitting in her throat.”

“I was just so relieved that I’d been in the room at the time or I may never have know what had happened.”

Astonishingly, after removing the needle, vets found Peach didn’t require any further treatment and she was completely uninjured.

Vets4Pets senior vet Caroline Ross, who has worked with animals for more than 20 years, said that Peach had a lucky escape.

She said: “It’s a good thing her owner noticed the thread coming out of her mouth and brought her in straight away.

“The throat is a delicate area. There are a lot of important blood vessels in the neck.

“It could have easily pierced an artery.

“If we hadn’t removed the needle the cat would have died.”

Animal surgeons at the practice managed to remove the needle by pushing the blunt end down into the mouth and slowly easing the sharp end out.

Veterinary nurse Stacey Pannett, who helped operate on Peach, added: “The needle had pierced the roof of her mouth.

“If it had gone up at the wrong angle it could have easily gone into her eyes and caused permanent damage.”

Beautician Natalie, from Blackpool, Lancs., fell in love with rescue cat Peach six weeks ago after seeing a picture of her on the UK advertising website Gumtree.

After hearing Peach was out of the woods, Natalie said: “It’s absolutely unbelievable that she’s come out of it completely unscathed.

“There’s so many ways that it could have been so much worse. If the needle had gone down into her stomach, it would have torn her to shreds.

“I’m just so happy she’s alright. I don’t have any children so she’s like my baby. I don’t know what I’d do without her now.

“It breaks my heart to think she might have been hurt.”

Natalie hopes to warn other cat owners of the dangers of everyday objects that can pose a threat to pets.

She added: “It’s unbelievable how close Peach came to being seriously hurt from something so small in just a split second.

“People assume that because it’s a sharp object a kitten won’t try to eat it, but they just might.

“I just don’t know how she survived it. I just can’t thank the vets enough.” 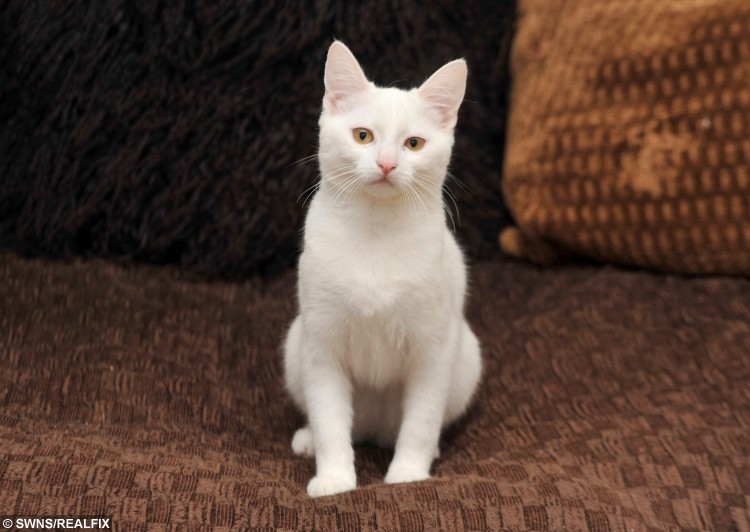 Tragedy of the toddler who died after choking on a grape