Miniature teacup puppy is so fragile from birth defect he has to travel in a pram!

Dobbie the tiny chihuahua how has to be taken walks in a special pram by Carrie Ridgeon because of his dome-shaped skull. See Masons story MNPRAM. Going to the park is a stylish affair for baby chihuahua Dobbie as he's pushed along in a snazzy pink pushchair while his foster mother's seven other dogs are made to walk. Dobbie, who is three months old, gets special treatment because of his dome-shaped skull. The bones in his head never fused properly, meaning that his brain is dangerously exposed. Because of this, Dobbie's foster mother must make sure that the puppy is constantly in a soft environment.

A miniature Jack Russell crossed with a teacup Chihuahua is so small and fragile he is taken for walks – in a baby’s PUSHCHAIR.

Little pet Dobbie was dumped on a rescue centre by his owners because of his odd dome-shaped skull.

Dobbie is being cared for by a foster family who have to make sure the puppy is always in a soft environment so he doesn’t get hurt.

He cannot play with other dogs and is the envy of other pooches as he wafts around in a pink PUSHCHAIR.

Dobbie is too small to wear a dog collar or harness but foster mother Shelley Ridgeon plans to get him a rabbit collar to wear.

The pink pushchair was donated after an appeal by Ravenswood Pet Rescue, who rescued Dobbie after the dog warden of a London borough discovered him abandoned.

Mother-of-five Shelley, 37, said: “We’re so grateful to the person who donated the pram.

“Dobbie loves sitting in it and it means I can take him out for a walk with the other dogs.”

Shelley, from March, Cambs., hopes Dobbie will be rehomed in six months if his head is fixed.

She said: “The vet says that Dobbie cannot be re-homed at the moment because of his skull.

“We have to watch out for signs like Dobbie suffering seizures or if he walks funny, to see whether he has any neurological problems.

“If we haven’t seen evidence of this in six months then we can find him a new home.” 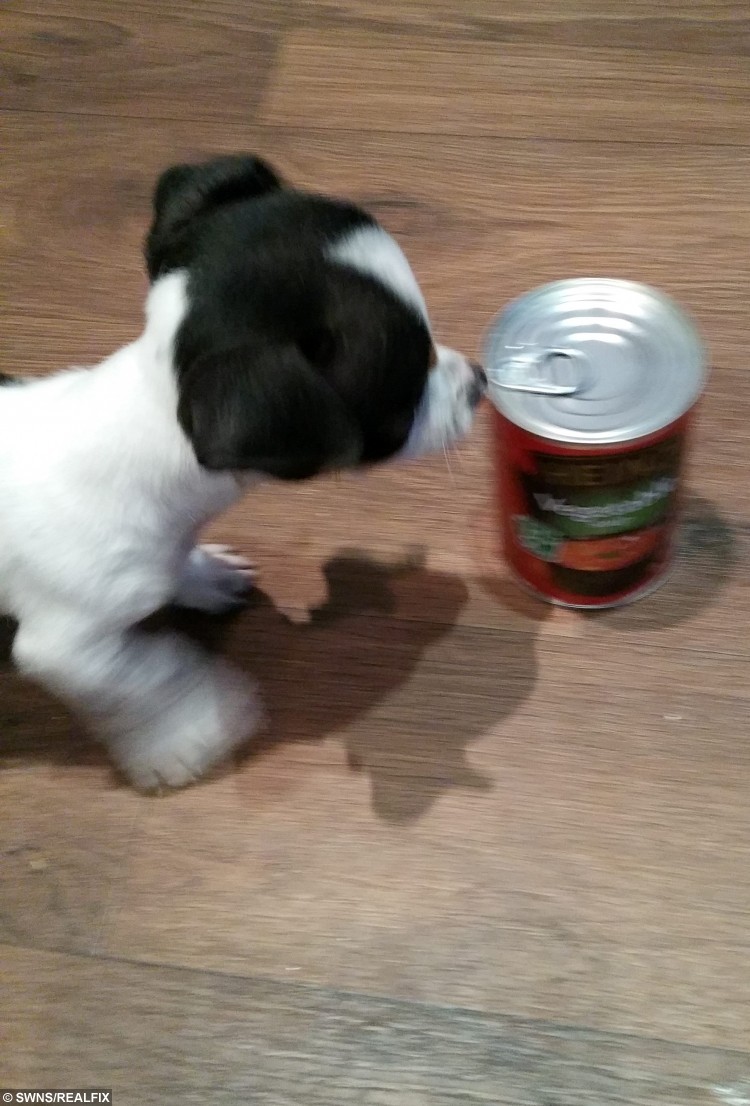 Dobbie now weighs 1.1 kilos – 100 grams more than when he was taken in by Shelley two and a half weeks ago.

He is so tiny that he can easily fit in a shoe, and is the same size as one and a half cans of Coca Cola.

Because he is so tiny he “feels the cold easily”, Shelley said.

She added: “He loves to play and to be cuddled. I don’t think he’s had a massive amount of human interaction because he likes to be picked up all the time.”

Caroline Trigg, 42, who founded Ravenswood Pet Rescue in Norfolk eight years ago, believes that Dobbie was the last of the litter and abandoned because of his skull deformity.

She said: “He was probably dumped as a stray as he couldn’t be sold because of his head.”

Caroline and Shelley are hoping to get Dobbie a soft, padded, plastic helmet, to protect his weak head.

Caroline said: “I’m going to speak to the vets at the local vet collage to see whether they can make something for him.”

They have about 10-25 dogs at any one time and over the last six years have looked after have nearly 3,000.

According to Caroline, 50 percent of the dogs that are rescued need major medical attention one way or another.