HomeAnimalsEditor's PicksNow this takes the biscuit! Mad cowman shares treats with his herd

A farmer shares a pack of biscuits with his herd of cows everyday after he taught them to take Rich Teas – from his MOUTH. 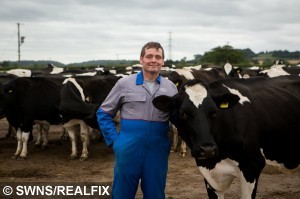 Andrew with his cows

Cowman Andrew Cartwright, 47, realised the herd had a taste for the biscuits when one grabbed it out of his hand while he was on a tea break.

He started to train the animal – now named Bisqui – to take the snack from his lips as a trick at the farm where he works near Thornbury in South Gloucestershire.

Now around a dozen of the 120-strong dairy herd line up to perform lip-to-lip biscuit exchange before crossing the field for afternoon milking.

Proud Andrew said: “I was eating a biscuit one day and she grabbed it and I thought ‘OK, if you’d like to share them, fair enough’.

“I used to give her biscuits out of my hand, then I thought I wonder if she will take the biscuit from my lips as a bit of a trick – and now there are about a dozen who take them, either from my hand or mouth.

“It’s an absolute nightmare, they eat most of the packet.

“It’s nice to make the way you look after the animals a bit personal, though with some people it is just a job.

“I enjoy looking after them, they are like part of the family.” 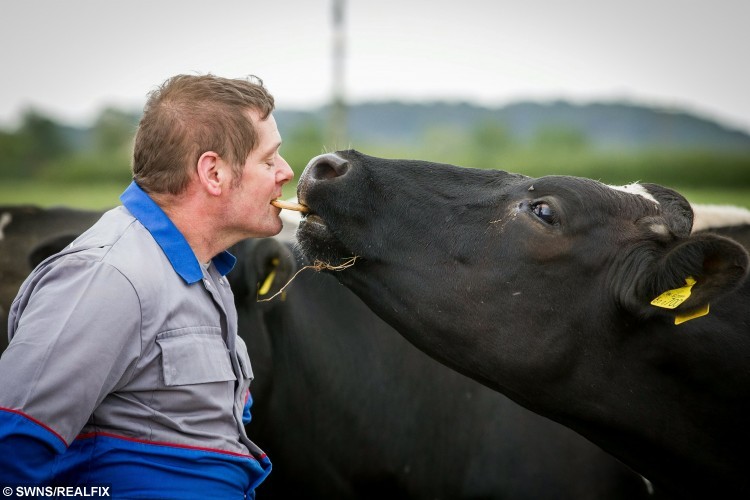 Andrew shares his Rich Tea biscuit with one of his herd

Andrew first realised the cows had a taste for the biscuits a few months ago while on a tea break at Yew Tree Farm, Upper Morton.

Now he has to take a whole packet of Rich Teas in his overall pocket to share with the herd every day, including his favourites Bisqui, Houndinus and Furball.

“Someone said the other day, how do you know one from another, but they are surprisingly different,” he said.

« Previous post The three-year-old on a DIET. A mum's struggle to stop son from eating himself to death
Next article » You'll never guess how old this yoga instructor is!