These gruesome photos show a dog who was left to suffer for over a year with a huge tumour on his face - as his owner prayed he would die. See SWNS story SWTUMOR; Cruel Kenneth Nigel Mackenzie failed to get treatment for his West Highland Terrier, despite the severe, weeping tumour on his ear. He was yesterday banned from keeping animals for five years after pleading guilty to causing unnecessary suffering to nine-year-old Max. RSPCA officers launched an investigation after being made aware of Max's condition, and uncovered an extreme case of neglect.

These gruesome photos show a dog left to suffer for over a year with a huge tumour on his face – as his owner left him to die.

He was banned from keeping animals for five years after pleading guilty to causing unnecessary suffering to nine-year-old Max.

RSPCA officers launched an investigation after being made aware of Max’s condition.

They said what they found was like “something out of a horror film”.

Max was taken to the charity’s clinic in Bristol where he was found to be in so much pain that he was put into the RSPCA’s permanent care. 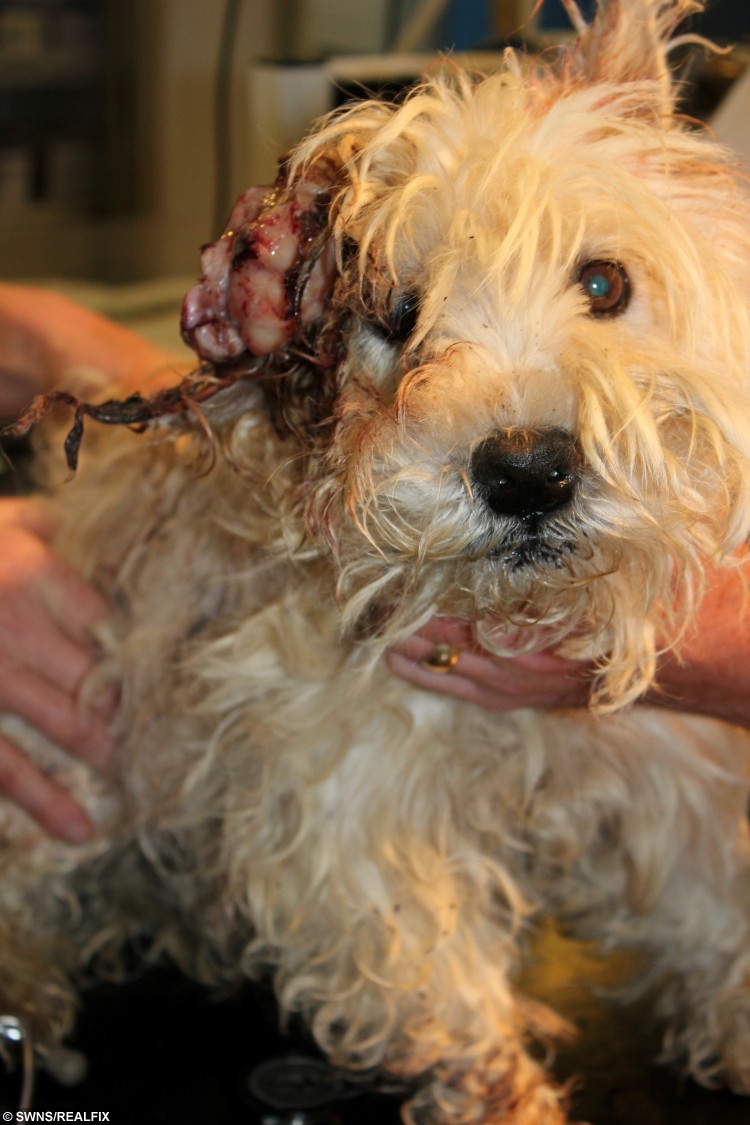 Vets have since treated Max and removed his tumour, and he is now on his way to making a full recovery.

RSPCA officer Miranda Albinson, who investigated the case, said it was a “heartbreaking and inexcusable case of neglect”.

She said: “I found Max in the corner of a room in the defendant’s house in a terrible state.

“Not only was his tumour gruesome and shocking – it was like something out of a horror film – but the poor boy was dirty and emaciated and I have rarely seen a more depressed dog in all of my time at the RSPCA.

Mackenzie, 53, admitted that he knew the dog was in pain but never took him to see a vet for the treatment he desperately required.

The defendant also admitted in an interview that every morning when he came down he hoped that the dog had died peacefully.

He said it was a relief that the dog was now out of the house.

Mackenzie was convicted for two counts of cruelty under the Animal Welfare Act and was disqualified from owning animals for five years.

He was also given 180 hours of unpaid work, a 12-month community order and ordered to pay £300 costs during the hearing at Swindon Magistrates’ Court.

The RSPCA officer added: “Since then, Max has been successfully treated, his tumour has been removed, and it’s like he’s got a new lease of life – he’s a different dog now.

“He’s improving daily and the difference in his behaviour is just remarkable.

“He also has been lucky enough to find a loving new home already and I’m truly over the moon that a dog as sweet as Max can now put this experience behind him.

“He has a much happier future ahead.”