Owner thought her dog was getting fat – she couldn’t have been more wrong!

Netta after having the football sized tumour removed - The ball is the approximate size of the tumour. A 3kg tumour the size of a football was removed from a small dog after her owner made a vet appointment thinking her pooch had put on weight and needed to go on a diet. See NTI story NTIDOG. Worried owner Angela Ravenscroft (47) had noticed Netta was looking larger around the middle. SheÃd been sick overnight and seemed distressed. Angela took her along to the vets thinking that sheÃd get some advice on how to put her on a diet. She was shocked when they said it was a tumour on her spleen. When vet Laura Cartlidge started to remove the tumour everyone was shocked at just how large it was. It was the size of a small football, was 30cm in diameter and weighed over 3kg, it was one of the biggest tumours that Laura had ever seen.

A dog owner was left stunned when she took her overweight pooch to the vets to find she had a 3kg (7lbs) tumour – the size of a FOOTBALL.

Worried Angela Ravenscroft, 47, took Netta to her local surgery after she spotted the Staffordshire Bull Terrier’s midriff getting bigger.

But she was left devastated when vets examined the 15-year-old and realised she had a gigantic tumour in her spleen.

Surgeons warned Angela that removing the 3kg growth, which was 12 ins (30cm) in diameter, would be extremely risky on a dog of Netta’s age.

But incredibly, the plucky pet came through a two hour operation the same day on March 13 and has since made a full recovery.

Mum-of-five Angela, who lives in Newcastle-under-Lyme, Staffs., said she was shocked to learn of the tumour, which weighed the same as a human baby.

The single mum, who works as a dog walker and pet sitter, added: “The weight gain was sort of gradual, she was just getting a bit bigger.

“I just thought she was getting old because she seemed fine in herself but then one night she was a bit sick so I decided to get her looked at.

“I took her along to PDSA thinking that we’d get some advice on how to put her on a diet.”

“I was really shocked when they said it was a tumour on her spleen. It was the size of a football or small baby.

“I was devastated and suddenly I thought I might lose her, it was awful. They operated on her there and then.

“When I got the call to say the surgery was a success and Netta was recovering quickly, it was such a huge relief.

“I’ve had Netta since she was eight-weeks-old and we’ve been through a lot together.

“They removed her spleen so her immunity is lower but she has recovered and is back to her normal self going on walks or running around the garden.

“She has never been one to play with toys but we bought her a football just because of the size of the tumour and she is quite active for her age.”

Vet Laura Cartlidge, who operated on Netta at the public-funded PDSA pet hospital in Stoke-on-Trent, Staffs., said the tumour was one of the biggest she had ever seen.

She added: “Netta’s owner was concerned she was putting on weight, but when we examined her we could feel an unusual mass, so we did some more tests, including an ultrasound, and discovered a large splenic tumour.

“Emergency surgery was the only option, though at fifteen-years-old, it was high risk.”

“When I started to remove the tumour everyone was shocked at just how large it was.

“It was the size of a small football, was 30cm in diameter and weighed over 3kg, it was one of the biggest tumours I’ve ever seen.

“Netta is only a small dog, it was eye-watering to see how huge it was.” 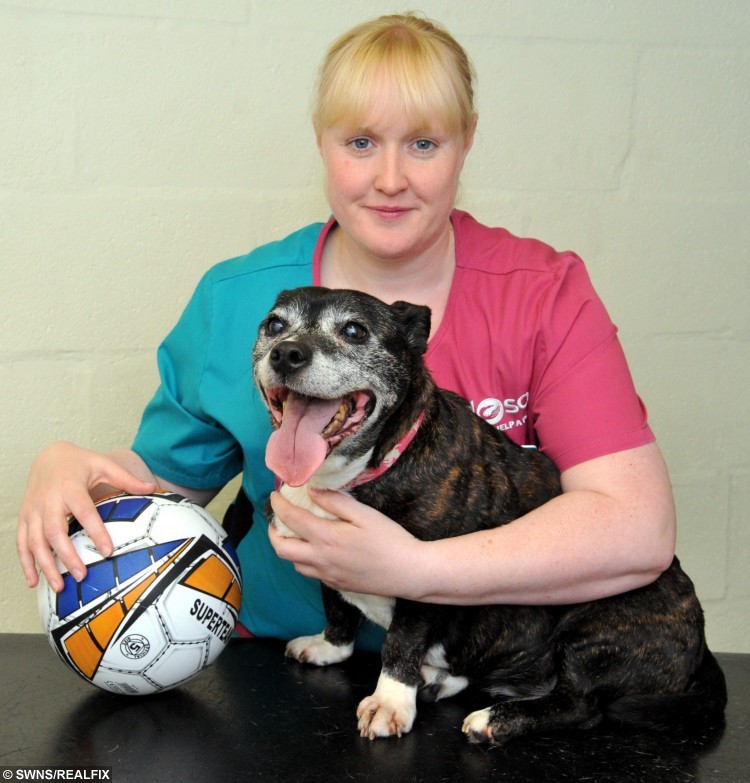 The patient who woke up from a hysterectomy missing her TEETH