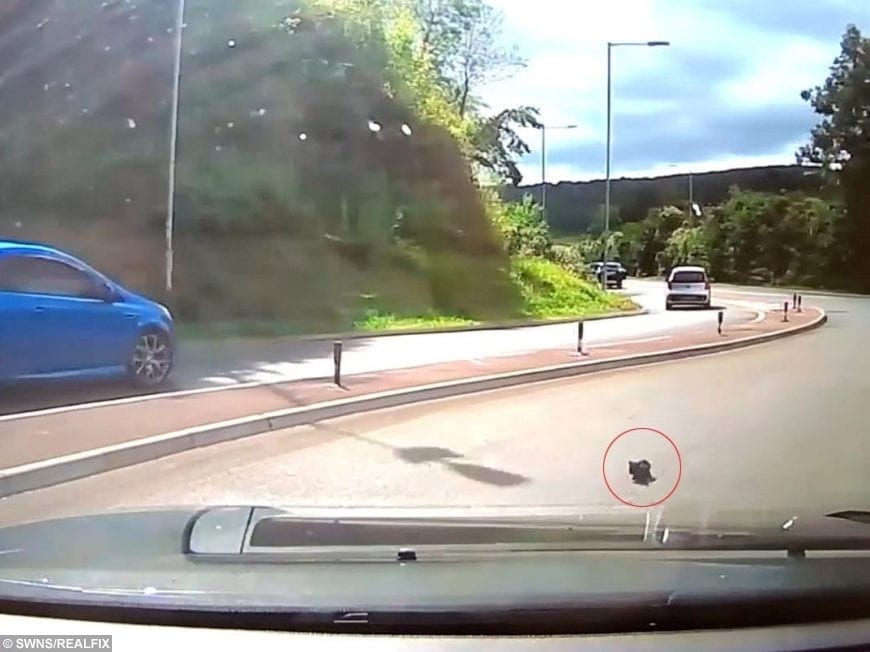 This is the moment a kitten was scooped up from the middle of a busy road after it was thrown — from a moving car.

The RSPCA is trying to track down the driver of a grey car after the six-week-old kitten was dropped on a roundabout.

Shocking dash cam footage shows the tiny terrified pet sitting in the road, after it narrowly avoided being squashed by another car.

The driver behind spots the kitten just in time and stops, seconds before disaster, to rescue the tiny grey cat.

The incident happened on the roundabout between the A4043 and A472 in Pontypool, in Monmouthshire in South Wales, on June 30 at around 4.23pm.

Fortunately, the kitten escaped the ordeal uninjured and was taken to a nearby vets, and is now being cared for by a volunteer from Cats Protection’s Gwent Branch.

The rescuer said: “The kitten was rescued by me and taken to the vets immediately.

“It was a beautiful little boy with cute blue eyes which we are keen to adopt. Will be helping all authorities involved to catch the people.

“There is no reason for this to have happened – so cruel.”

RSPCA Cymru is appealing for witnesses.

RSPCA inspector David Milborrow said: “We’re very grateful to those who managed to safely stop when this happened and help this poor kitten.

“It was remarkable that this kitten survived this shocking incident without injury. We believe that the cat may have come from a grey car which may have been a Fiat.

“We’re now appealing to any other drivers who may have seen this happen.

“There was a red Mazda car who also stopped and we’d really like to speak to them to see what they witnessed.”