Pincher the doberman wearing the Storm trooper costume. See South West copy SWTROOPER: A Star Wars fan has created the worldÃs best dog costume, turning her Doberman into a Ã STORMTROOPER. The incredible full-body costume turns the massive Doberman Pincher into one of the evil Galactic EmpireÃs finest, covering her head-to-toe in the iconic white and black uniform. Sabrina Ridler spent hundreds of hours painstakingly making the bespoke costume for her beloved four-year-old pet Penny Bark-Bark. The well-behaved brown dog would look at home on any Death Star when she wears the incredible costume Ã which even includes a helmet. Proud owner Sabrina said: ÃPenny is now a proud member of Stormtrooper Ranch.

A Star Wars fan has created the world’s best dog costume, turning her Doberman into a – STORMTROOPER.

The incredible full-body costume turns the massive Doberman Pincher into one of the evil Galactic Empire’s finest, covering her head-to-toe in the iconic white and black uniform.

The well-behaved brown dog would look at home on any Death Star when she wears the incredible costume – which even includes a helmet. 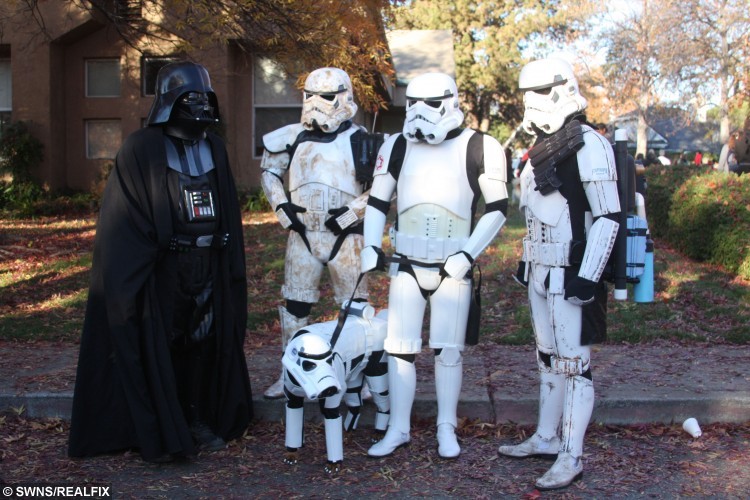 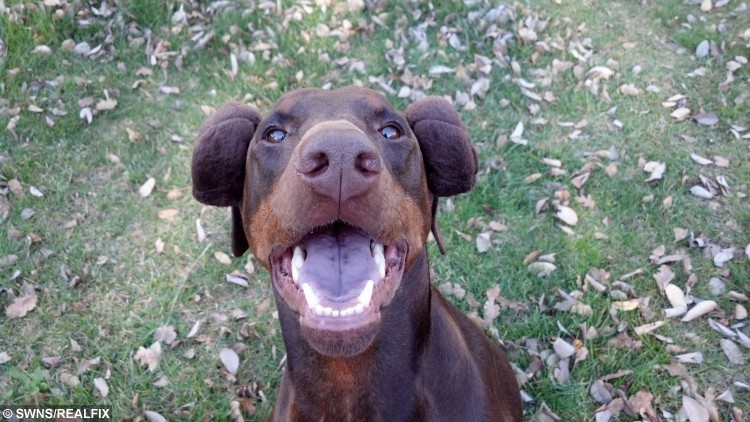 “The outfit was originally meant to be just a Halloween costume, that would be just worn a few times.

“But because she wears it all the time now, it had to be redone – the only part of the original that is still in use is the helmet.”

In one of the hilarious clips posted online, Penny in her outfit is seen playing in the garden before, like a true villain, trying to hunt down a defenceless creature – a squirrel.

Sabrina added: “I have since rebuilt it a few more times to make something that will endure her trouping with the Stormtroopers on their charity events.

“It’s much more detailed, flexible, even lighter to keep her cool and is built to endure.” 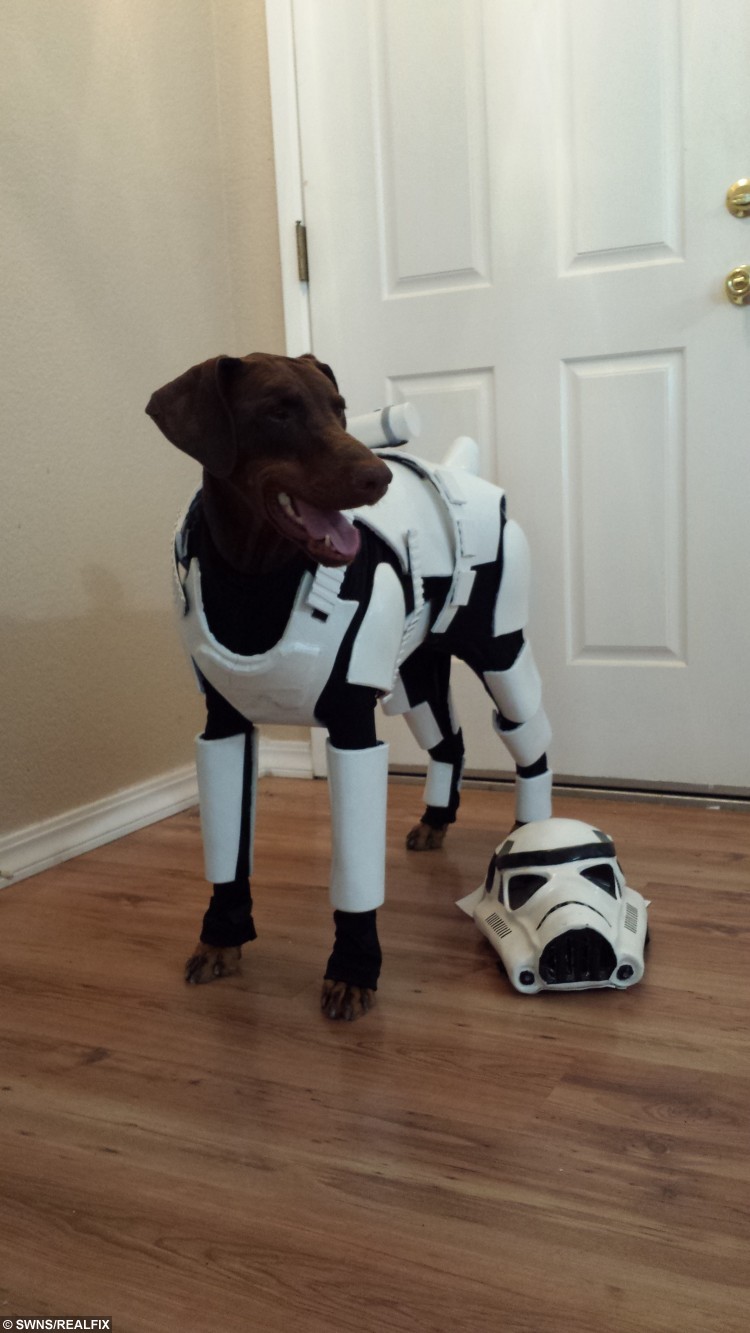 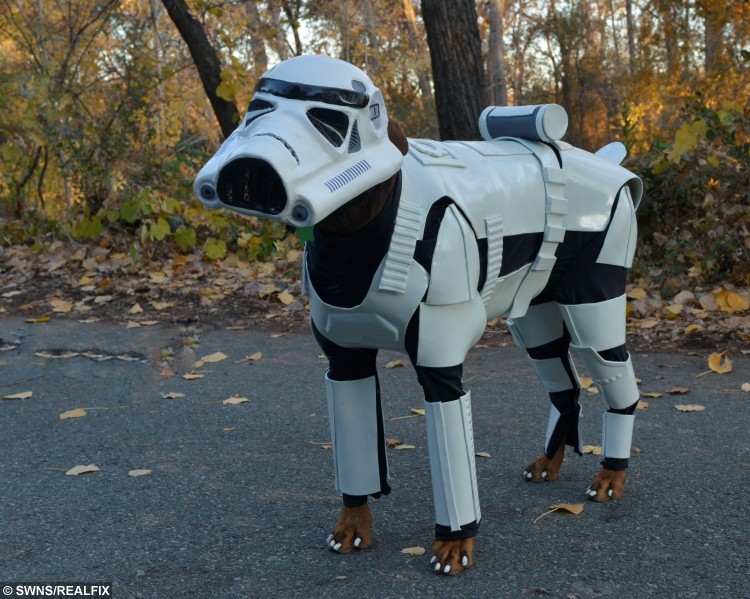 Sabrina, from Redding, California, has been inundated with thousands of messages from well-wishers after posting pictures of her costume-loving dog online.

Penny now spends her time dressed as the world’s first Stormtrooper dog with members of the Stormtrooper Ranch – a fictional ‘regiment’ of fellow Star Wars fans who collect money for charity at events.

Crafty Sabrina made the iconic costume, including the helmet, completely herself, using fibreglass and resin – which she cast around her dog’s head.

She said: “None of this could be done if Penny weren’t a very tolerant dog.

“She has been dressed up in one way or another since she came home as a little pup so this build was nothing new to her but most dogs will have a big issue with it.”

“To start this build we had to start with a mold of her head.

“For this build I wrapped her head in a nice thick soft towel then used fiberglass casting material to cast the top half of her head.

“The towel not only protected her, it also allows extra room in the helmet to breathe and add padding for adjustment and comfort – it’s better to have the helmet too big than too small.”

As well as the Stormtrooper costume, Penny also enjoys dressing as Princess Leia and characters from other iconic films, including Iron Man and the Ghostbusters.

The body of the costume is made out of lightweight foam, so the happy pooch can stay cool and is free to move around. 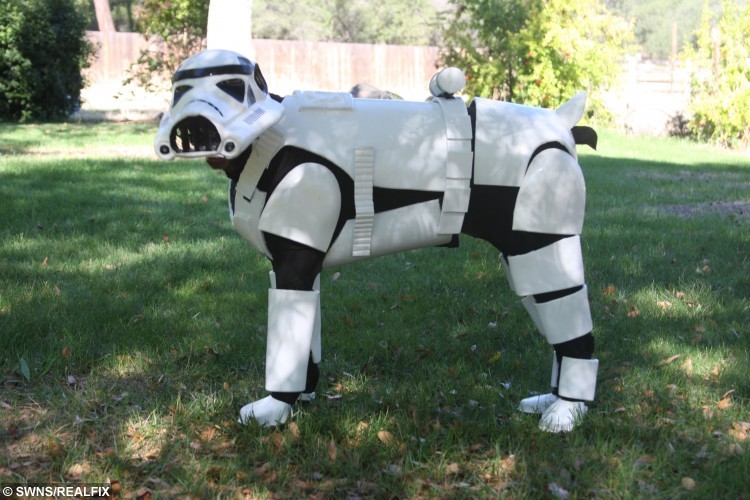