This amazing kitten has an extra spring in her step as she is the only feline in Britain to be born with SIX LEGS.

The ultra-rare condition is called polymelia – which means that Henrietta the tabby has an extra pair of legs – and can occur in humans and animals.

The most probable cause is that the kitten had a conjoined twin in her mother’s womb.

Now in the care of cat rescue charity, Feline Friends, Henrietta is having to wait for an operation to remove the surplus limbs so she can live a full and happy nine lives. 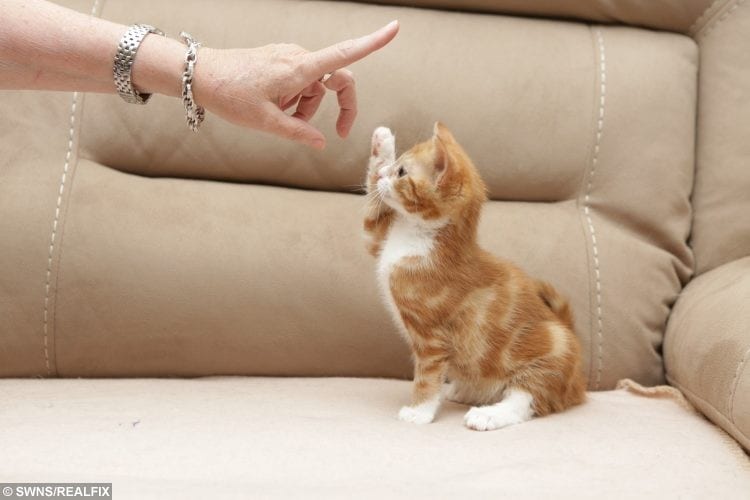 Volunteer Pat Dryden, 60, told how they at first thought Henrietta had skin tags – but knew something was desperately wrong when they grew longer, developed muscle and bone, and FEET.

Eight-week-old Henrietta’s extra pair of legs have grown below the knees of her hind legs.

The condition is so rare that a case of it has not been recorded in the UK.

Pat, from Wallsend, Tyne and Wear, said: “It was Henrietta’s mum that first came to us in May as a pregnant cat, who we named Bridget.

“Pretty soon after we had her she had four kittens. One of those died at birth while ginger Ed died later of a brain tumour. Tortoiseshell Lucy appeared to thrive.

“Henrietta was originally Henri – named after a French artist with short legs Henri de Toulouse-Lautrec – because we thought she was male, with her being tabby, and she was born with a twisted back left leg. 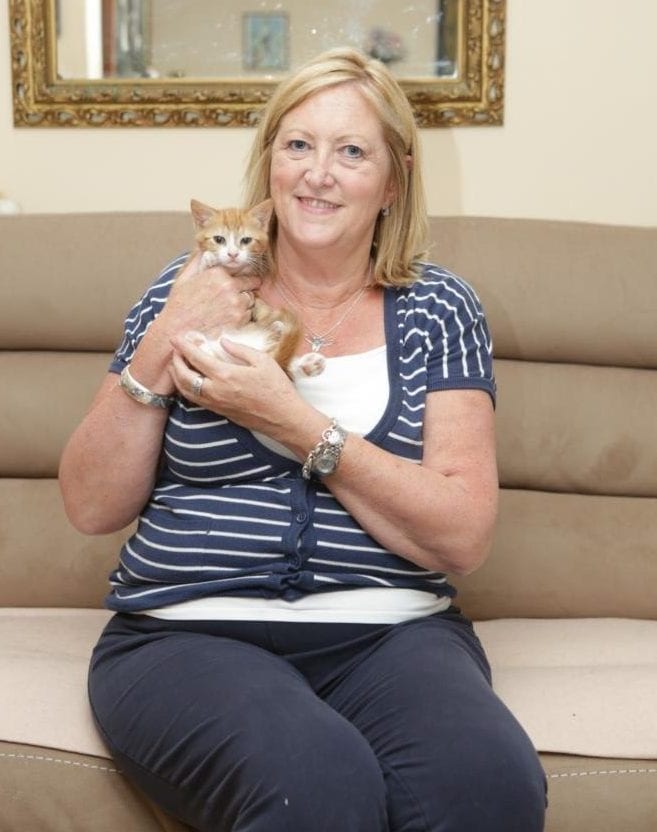 “Her back leg looked short and like that of a ballerina with flat pointed-out feet. It’s called twisted leg syndrome and can happen when the kittens are squashed in the womb.

“We were able to manipulate her leg back to its normal position over time with daily massage. Now you wouldn’t even know she had been born with it.

“She was also born with a couple of skin tags on the back of her legs, which we thought nothing of.

“But then we were astounded as these started to grow, over the last seven weeks they have developed bone and muscle and then feet with pads and claws. They really are the strangest thing.

“We looked on the internet and found that it could be due to having a conjoined twin. We thought this also might explain why she’s a female tabby, which is quite rare in itself.

“She is doing very well for the moment but we worry that over time, as these strange legs grow, they will impinge on her movement and quality of life.

“We are now raising money for an operation to have them removed.” 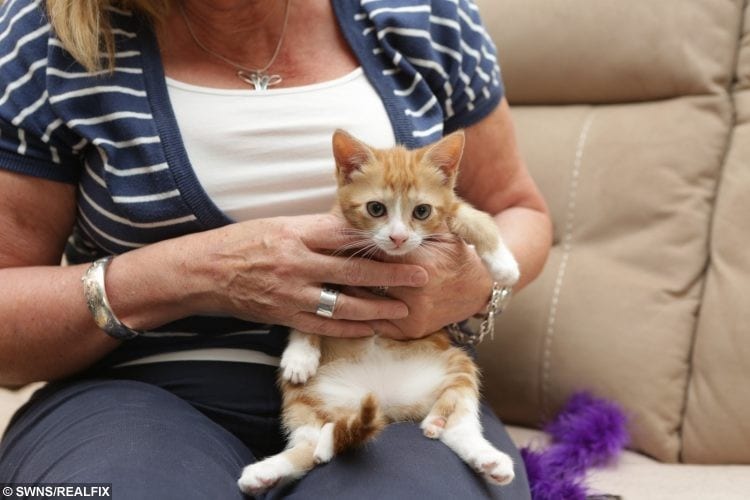 The local vets, Blythman and Partners, have had a look at Henrietta and decided that they ought to perform the operation when she is six months old when she will also be neutered.

Part of her treatment will involve an X-ray to make sure it is safe to perform the operation as they see how the legs are attacked to her skeleton.

Extra legs aside, Henrietta looks a picture of health. She is full of energy and loves a cuddle and a play.

Pat said: “She has a gorgeous personality, she is just lovely. She is a ginger queen.

“She is different and wonderful.”

Now Pat, who works for HMRC and has volunteered for Feline Friends since 2015, said the charity are going to keep the mum and her two kittens for a while to make sure they are in full health.

Widow Pat, who lives in a terrace bungalow with five cats of her own, said: “We have had problems with this litter so it’s only fair that we make sure all cats are in good health before going out to a forever home.

“Of course this all costs money.

“We are now in the process of raising money for Henrietta’s operation, we are expecting it to be at least £2,000, and that is a knock-down price.

“We are a great charity and all the money we raise goes directly to the cats we look after.

“We work without any premises so all our cats live in foster homes, with foster carer working on a voluntary basis.” 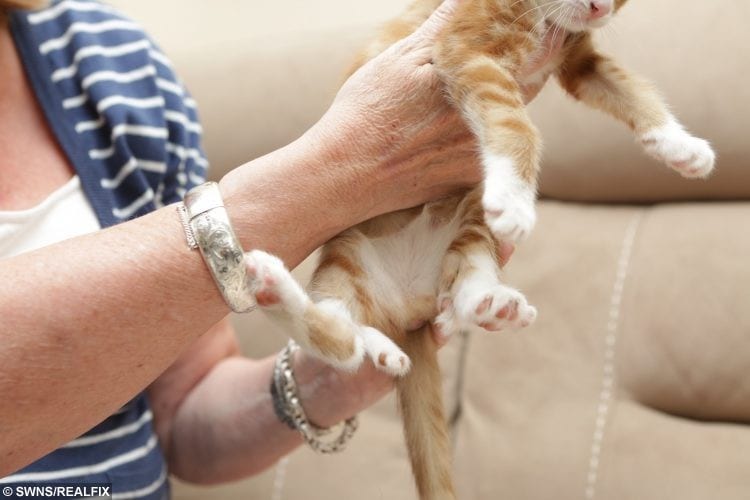 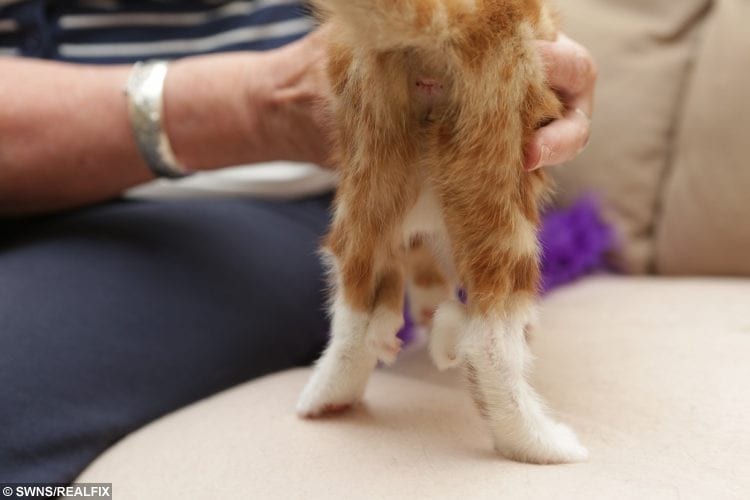 Feline veterinary surgeon, Jo Lewis MRCV, aka The Cat Vet, based in Berks., said: “What a special little kitty Henrietta is. Hope she finds an equally special home.

“As a vet for over 20 years and having spent most of that time working just with cats, I can’t say I have ever come across a kitten born with extra limbs, or what is called polymelia.

“Although it is known to happen, it is a very rare condition.

“It has been documented in cats before though and other (mainly food producing) animals as well as in humans.

“It is likely that something went slightly wrong during Henrietta’s early few weeks as an embryo developing in her mum’s womb.

“It could have been from a random genetic defect in her chromosomes, remnants of a conjoined twin or perhaps a drug, toxin or infection that her mum was exposed to around the time when she became pregnant.”

Snake Takes Woman By Ssss-urprise By Licking Her Foot