This has got to be Britain’s luckiest turkey!

Dinner the turkey. Surviving 15 Christmases on the trot probably makes this male turkey the country's luckiest festive bird... and possibly the oldest. See NTI story NTITURKEY. The gobbler, known as Dinner or Boss Man to the staff, has ruled the roost at Stonebridge Farm, Notts, for at least a decade and a half and is the only poultry on site to have a name. ÃNo one is sure exactly how old he is,Ã the farm's operations co-ordinator Stephen Gee said yesterday. "But my wife Marie (Rogers) started working here 16 years ago and always remembers him being here. So while we can't name his age exactly we are pretty confident that he is one of the oldest and luckiest turkeys around and he gets past Christmas every year and breathes a big sigh of relief in January," the 64-year-old retired sixth form teacher added. A domesticated male turkey normally has a lifespan of around ten years.

Britain’s oldest turkey is still going strong after avoiding the Christmas chop for 16 YEARS – despite being named DINNER.

The lucky bird has ruled the roost since owners Stephen, 64, and Marie Gee, 62, took over Stonebridge Farm, in St Anns, Nottingham in 1999.

The couple spared him the roasting tin that year and have never had the heart to slaughter him so kept him as a pet in a paddock alongside 60 chickens and 30 ducks.

Stephen said he believed Dinner’s longevity was down to him being too vicious to catch – as well as a burgeoning romance with a turkey hen.

He said: “He is at least 16-years-old. My wife worked has worked at the farm for that long and can always remember him being here.

“We are confident that he is one of the oldest turkeys around and the luckiest – he gets past Christmas every year and breathes a big sigh of relief in January.

“He is very vocal and makes plenty of noise, plus he’s a big boy. I’m not too sure how heavy he is because I’m not brave enough to try and pick him up.

“He doesn’t really like human contact so lifting him up would be a bit of a foolish thing to do. His claws could certainly do a lot of damage.

“Even if we wanted to eat him I think he would be too vicious to catch.

“But I think his real secret is his girlfriend, the other turkey in the farm. He likes showing off to her and I think that’s given him a new lease of life.”

“He acquired her about five years ago and they have been inseparable ever since.

“He normally keeps himself to himself and doesn’t have a stressful life at all.”

Stephen and Marie, who are both retired teachers and run the three-and-a-half acre urban farm together, say Dinner is now one of their prized pets.

Marie, from Sherwood, Nottingham, added: “He’s like a pet now. He’s never come close to being slaughtered because we just couldn’t do that to him.”

“I think that’s why he doesn’t like humans too much – because he has it at the back of his mind that he might one day end up on someone’s plate for Christmas dinner.

“But that won’t ever happen. Staff at the farm named him as a bit of fun as a nod to his fortune at surviving every Christmas.”

Katie Whiston, 24, a volunteer at the farm, added: “He’s certainly quite vocal and always intrigued in what we seem to be doing in the pen.” 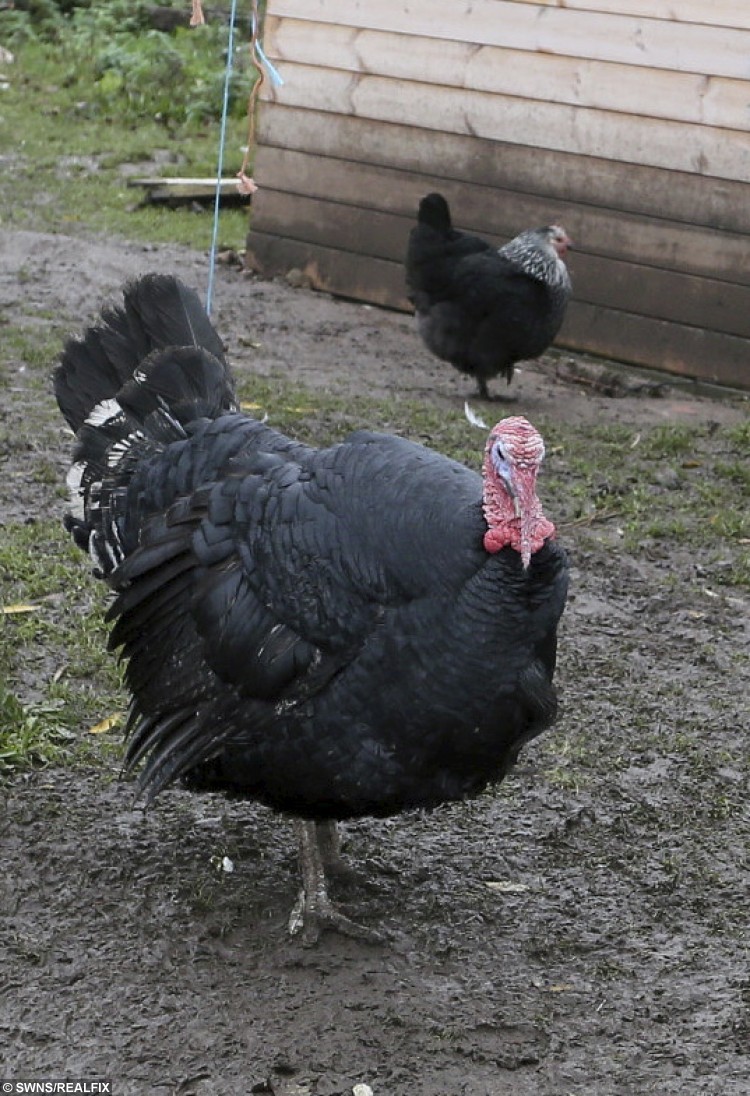