by RealFix
in Animals, Cute, Videos
0

An animal-lover who feeds a robin from the palm of her hand up to 100 times a day has named the bird Bobby and even described him as “part of the family”.

Tracy Conway-Smith, 50, struck up an unlikely friendship with the curious creature two years ago after he built a nest at the bottom of her back garden.

The bird is now so comfortable in Tracy’s presence that he flies up and perches on her hand dozens of times a day waiting for a healthy portion of mealworms. 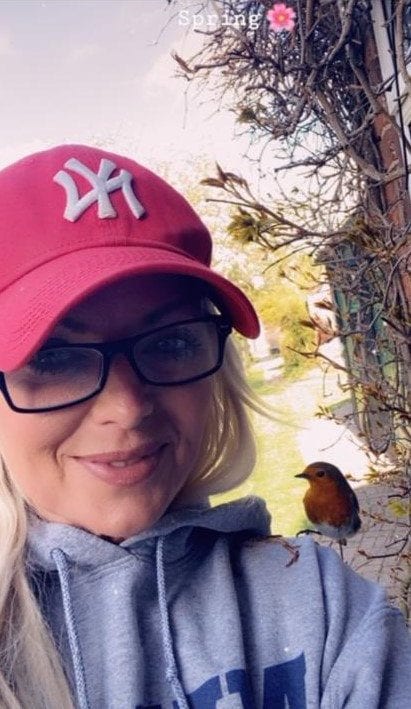 The mum-of-three said Bobby, the “boldest” bird she has ever seen, will even sit on her door handle and use his beak to knock the glass in order to beckon her.

Tracy, who’s from a village in North Lincolnshire, has shot a series of incredible video clips showing the bird descending from the sky and delicately balancing on her thumb.

She said: “Bobby is a right little character, he’s very bold and confident.

“I love wildlife but I have never come across a bird like him, he’s become part of the family over the past two years.

“I see him more often that I see anyone else to be honest, I’m not joking when I say he comes to get food from me 100 times a day.

“I wouldn’t have it any other way though, I love him.”

One particularly special moment came last month while Tracy was watching the evening coronavirus briefing, when Bobby swooped down and perched on her phone. 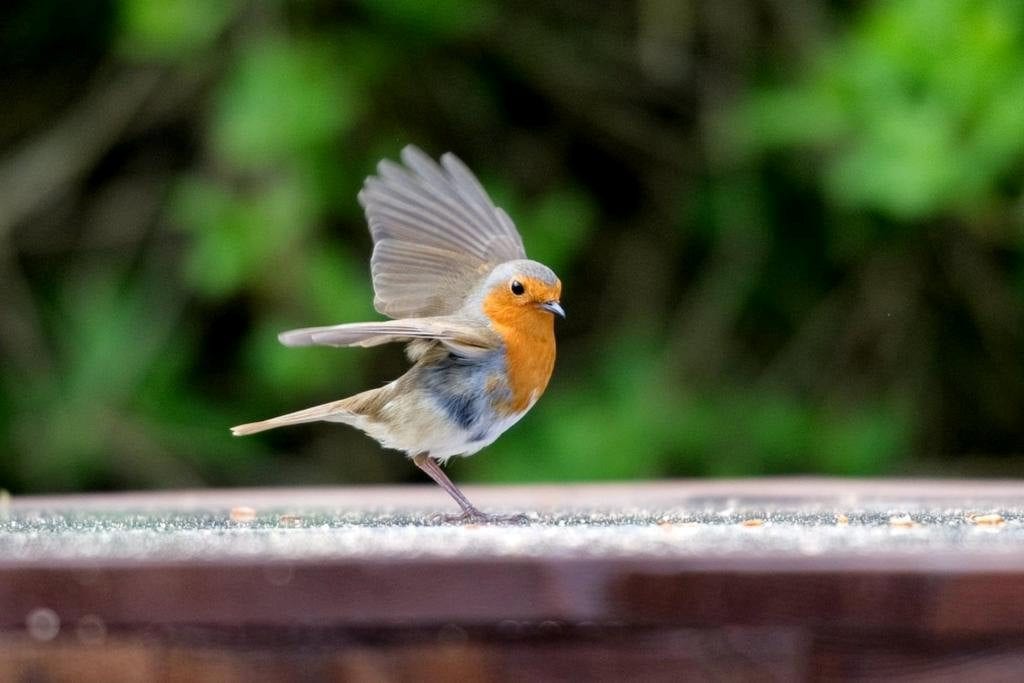 A hilarious picture shows the tiny bird peering down and watching the screen.

Tracy said: “He’s always making me laugh with something or other.”

Tracy lives in the village of Barnetby with her husband Richard, a 51-year-old forklift engineer, and youngest child Liberty, 17.

She said: “Having Bobby around is just like having a dog, I’ll shout down the stairs for Richard or Liberty to feed him, it’s hilarious.”

Since nesting in Tracy’s garden Bobby and his mate, christened Betty, have had three families of chicks, the latest of which hatched last month.

Tracy thinks the reason Bobby makes so many visits to her per day is so that he can fill his mouth full of feed and then fly it back to the chicks, who gobble it up.

In feeding the birds Tracy goes through an entire box of more than 500 mealworms each day and she estimates they go through around 4,000 a week.

Tracy gets up at around 6.30am and goes to give Bobby, who’s usually waiting at the back door, his first meal of the day. 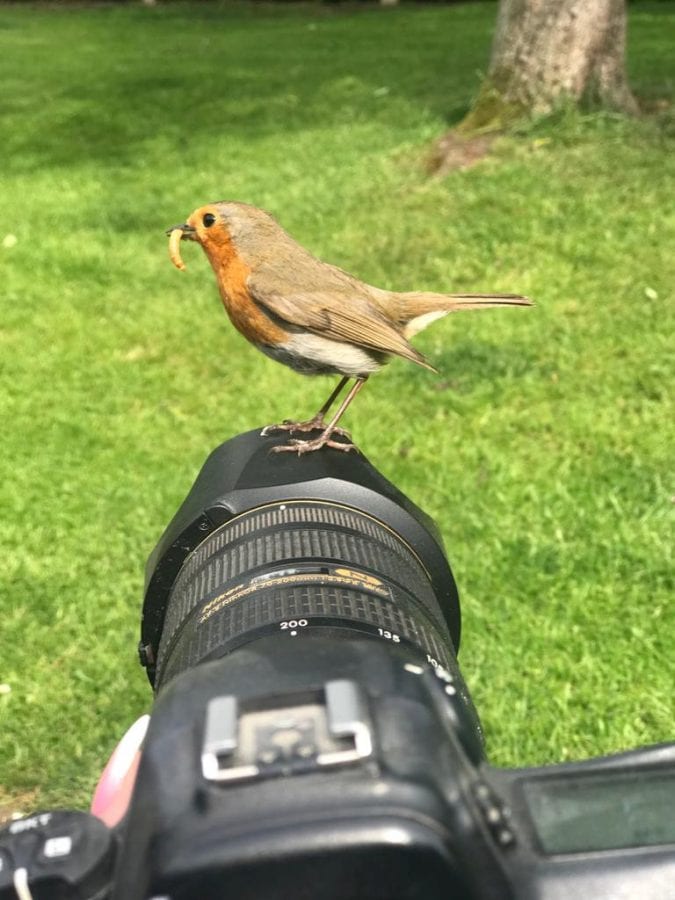 As a photographer, she works from home in a studio at the bottom of her garden and steps outside to feed Bobby dozens more times throughout the day.

Tracy usually gives Bobby his last meal of the day at around 9pm before she goes to bed.

Despite the time and effort it takes to maintain his diet Tracy said “it’s worth every minute”.

She added: “During the lockdown keeping a close eye on the robins has been a real joy.

“With not a lot else to do it’s been a nice little distraction. It’s fascinating to watch them go about their lives.” 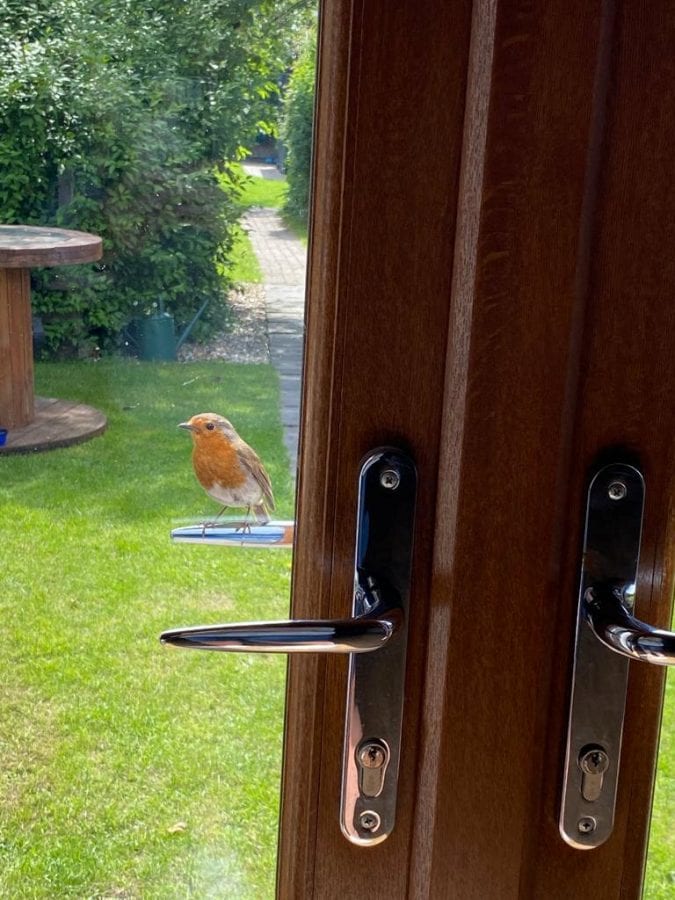 Robins are known to scavenge food in unusual ways and in the wild often follow large mammals such as deer in order to get food from them.

They are also known to be very friendly towards humans, usually because they know there is a meal in it for them.

Because of high mortality rates in the first year of a robin’s life, due to predators, their average life expectancy is only 13 months.

However, once past its first year the animal can expect to live much longer and one robin has been recorded reaching 19 years of age.

WATCH: Woman rescued rare kingfisher by hand after it flew into her kitchen

Meet the adorable teddy bears who have travel the world

Meet the HORSE that can’t wait for boozers to reopen