WATCH! – Thousands Of Jellyfish Arrive In Britain After Heatwave Turning The Sea Purple

Tens of thousands of jellyfish turned the sea purple in a stunning natural display caused by the recent heatwave.

Moon jellyfish – which have a mild sting – are common visitors to our coasts during May and June.

But this year they have appeared in unprecedented numbers and left the water itself looking like jelly.

This multitude was filmed at Ilfracombe harbour in North Devon and the scenes were repeated along the coast.

They were videoed by local shopkeeper Jeannette Cann who dashed to the jetty after being alerted by a customer.

Jeannette, 50, said: “The water was literally moving like a purple jelly. It was an incredible sight.

“The water looked purple, which was lovely, but it was still a rather shocking thing to see as most of them were dying. It was hard to see for that reason.

“I just went down to the jetty and did a film. I think it is fascinating what nature does and it was a very unexpected day.

“It was all around the area and a lot of beaches had it that day.

“They were there most of the day after the tide came in and afterwards were drying out on the beach.

“We have only recently moved to the area and our reaction was just ‘wow.’

“But people who have lived here their whole lives say they have never seen anything like it before.”

He said the large number was probably caused by the recent hot weather which warmed the water and gave the jellyfish an opportunity to multiply.

He added: “Moon jellyfish can give a mild sting like a nettle but not as stingy because they can’t penetrate the skin.” 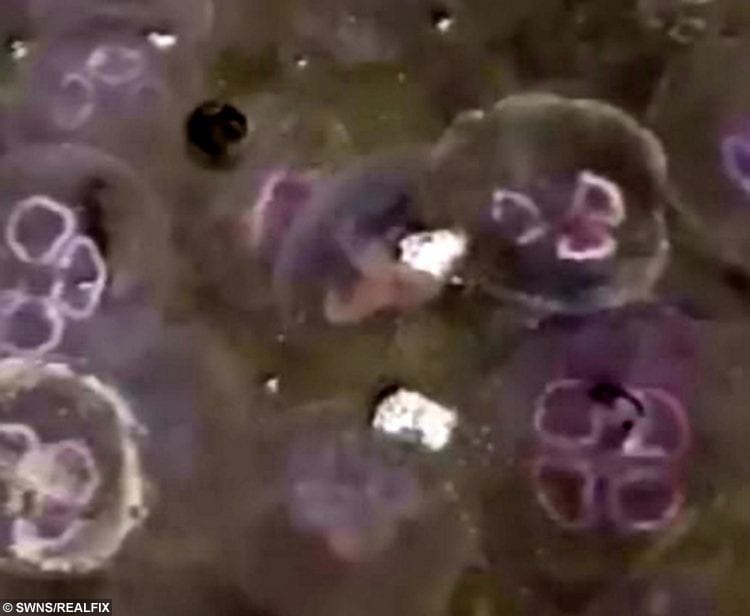 Paula Ferris, chair of Coastwise North Devon, said the high number of jellyfish appear during the “spring bloom” between May and June when the water is warmer.

She added: “The moon jellyfish only eat plankton that are under a millimetre in size, smaller than the thickness of a strand of human hair, so pose no danger to people.

“But Jellyfish do occasionally sting and touching them in sensitive areas, such as around the eyes, can be damaging.”