Agoraphobic Paula Ray pictured at the home she has not left for 20 years- she may have to leave the home for good because she can't afford to pay the 'bedroom tax'. See SWHS story SWHOUSE; An agoraphobic who has not left home her home in TWENTY years could face eviction - in a row over bedroom tax. Paula Ray, 52, has not set foot outside her three bedroom property in two decades due to her severe phobia - and has missed both her daughter's weddings and never been out with her grandchildren. She began to suffer from the debilitating condition in 1984, but it got so severe in 1995 that she has been housebound ever since. She lives with husband David, 57, who acts as her full time carer, but now fears she may lose her home after incurring nearly Ã2,000 in backdated fees for bedroom tax after her daughter moved out.

An agoraphobic who has not left her home in 20 YEARS is facing eviction after being hit with a £1,500 bill for unpaid bedroom tax.

Paula Ray, 52, has not set foot outside her three-bedroom council house since 1995 due to her severe phobia.

She has missed both her daughter’s weddings, never been outside with her grandchildren and is too frightened even to walk to the end of her garden.

But she now fears she will be forced out after being hit with a demand for over £1,500 in backdated bedroom tax incurred since her daughters moved out.

The housebound mother-of-three began to suffer from the debilitating condition in 1984 but it got so severe in 1995 that she has been stuck inside ever since.

Paula lives with husband David, 57, who is her full time carer, and says she is stuck in a living hell.

She said: “I look at the same four walls every day, and I have for the past 20 years. No one in their right minds would do that by choice.

“Agoraphobia is the most debilitating illness. I would rather have no legs and be in a wheelchair.

“I look fine to people, so people don’t understand it, because they can’t see it.

“It’s one of those illnesses that if you don’t go through it then you will never understand it.”

“I’ve tried to leave the house, but the furthest I can manage is 18ft from my back door, I can’t even reach the end of the garden because I get such severe panic attacks.”

Paula was first diagnosed with agoraphobia in the 1980s and in 1994 was also found to have Meniere’s syndrome, a disease of the inner ear which affects balance.

She is registered disabled and received disability living allowance since the early 90s, which was recently replaced by the personal independence payment.

Her last trip outside was in 1995 when she fell onto people and ended up crawling across a zebra crossing back to her home.

She added: “I missed both weddings, which was heartbreaking. I’ve never taken my grandchildren out.

“The oldest is 11 and I’ve never taken him anywhere.

“I’ve been with my husband 32 years, married for 27. He does all the shopping, takes the bins out, puts the washing out.

“I wouldn’t be able to survive without him.”

Paula, of Newton Abbot, Devon, said she got a letter from the council saying she owed £1,400 in bedroom tax at the beginning of July.

She initially shared her three bedroom home with her husband, daughters Tara-Jane, 31, and Latoya, 28, and son Michael.

But after her two daughters moved out Paula says she was unaware she should have been paying an extra £14 a week for bedroom tax and has now clocked up over £1,500 in backdated charges.

She said: “We use the bedroom for my husband, because I often get sick in the night and I keep him awake, so he sleeps in the spare room.

“I told them the room is always in use, but they said it doesn’t make any different because he’s my carer, and the courts said he should live in the same room as me.

“I think people like me should be exempt from bedroom tax because I am agoraphobic and can’t leave the house.

“Even if they offer me a two bedroom place I wouldn’t be able to get there because I’m agoraphobic, they are discriminating against me because of my illness.

“How can you expect people to move if they can not even leave the house?”

“It doesn’t make sense; there is no way I can get out.”

Paula accused Teignbridge District Council of failing to show enough compassion and understanding about her condition.

She said: “We are already in poverty, and were being slammed again. It’s so wrong, people are in dire straits for it.

Teignbridge District Council said: “We understand the sensitivities around this claimant’s case and are committed to assisting where we can.

“We are liaising with Teign Housing to ensure that the claimant has the support she needs to continue to pay her overpayments and rent.” 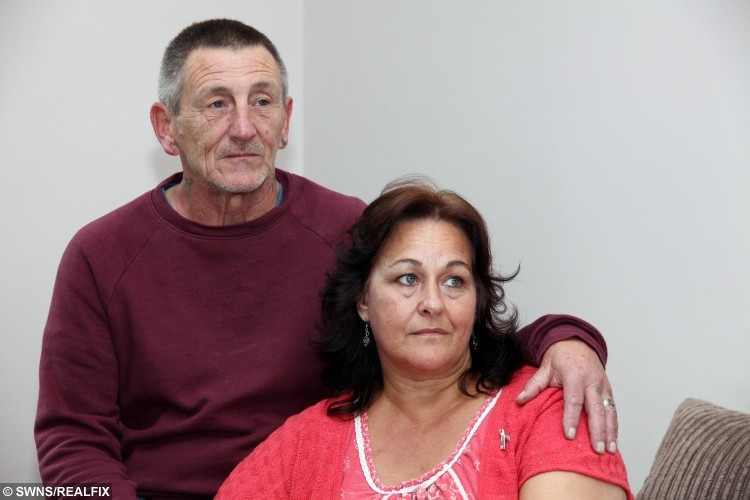 The three-year-old boy who is already FOUR-FEET tall!