Battle of the brides! Find out why they spent over two days standing in shop window

by RealFix
in Bizarre, Relationships
0

(L-R) Tara Attis, 32, and Kate Holder, 27, in the shop window of Budeiful Bridal shop. See SWNS story SWBRIDE; Two women spent more than 50 hours dressed as mannequins in a shop window wearing bridal gowns - in a bid to win a dream wedding. Determined Kate Holder and Tara Attis dressed as mannequins and stood on display in a 1ft x 3ft window space for two and a half days. They stood still in Budeiful Bridal shop window with whoever could stay the longest winning a dream wedding. Kate ending up the eventual winner after Tara finally stepped down late on Monday night after 58 and a half hours - with only the odd toilet break.

Two women spent more than 50 hours in a shop window wearing bridal gowns – in a bid to win a dream wedding.

Determined Kate Holder, 27, and Tara Attis, 32, dressed as mannequins and stood on display in a 1ft x 3ft window space for two and a half days.

They stood still in Budeiful Bridal shop window with whoever could stay the longest winning a dream wedding.

Kate ending up the eventual winner after Tara finally stepped down late on Monday night after 58 and a half hours – with only the odd toilet break.

Joyous Kate was rewarded with her dream dress and a range of other services that will enable her to have her dream wedding to partner Paul Crockford in February next year.

The unusual challenge was set up to celebrate two years since the store in Bude, Cornwall, opened.

The competitors were only allowed brief toilet breaks every four hours during their lengthy stand-in and also had to sleep in the window.

Kate said: “I have been engaged for five and a half years so am always looking at wedding stuff and just thought this was such a brilliant idea that I had to get in on it.

“I went along and found my dream dress not thinking in a million years my name would be pulled out the hat.

“I said all along though that if I got in the window I would not be coming out.”

Kate said the challenge began on Saturday at 11am with rules that meant they could sit and lean in the window.

But the following day, things were tightened up which meant they had to stay standing at all times.

She said: “We looked at each other and said if laze around we could be here for weeks so we prompted a rule change that we would just stand which made it much more a test of endurance.

“As time went on it also got a lot more strict with the rules and if you needed the loo you had to dash up and return quickly to the window.”

“It was tough. Literally ten minutes before Tara got down I was clock watching and finding it very hard.

“But I knew I was not going to give up. I could not give up on my dream wedding.

“The hardest part was sleeping. We were allowed to lie on the wood in the window between 11pm and 7am and must have got about four hours broken sleep each night.”

“To finally win was amazing. I was in shock. Tara had organised for her other half to pick her up without telling us. I thought he had just come to offer her support but she then jumped off the window and into his arms.”

Kate of Holsworthy, Devon, who has two step children Alice, 13, and Taylor, 11, and two children Ellis, four, and Cohen, two, said she jumped straight back into her role as a full time mum.

But while revelling in her victory she spared a thought for Tara.

“She was a worthy competitor. We got on so well and just chatted non-stop. That was a big part of why it went on for so long. She is such a lovely lady and I can not thank her enough for stepping down.

“It must have been a very hard decision to make but she was missing her family and friends so much.”

The shop owner Emily Benny said: “Tara finally stepped down after 58 and a half hours. She just wanted to go home to her little girls and had just had enough so arranged for her partner to pick her up.

“The event was held to celebrate our second year of opening. It was really successful and no-one ever dreamt it would go on as long as it did.”

“It was incredible really. We had so many people coming to talk to them – and they were scaring people as they went past.

“There was constant beeping and waving.

“No-one expected them to last that long but neither of them were going to back down.

“It meant a lot to both of them but Kate was just so determined to win and was not backing down. She even missed her son’s first day at school.”

Tara, of St Austell, Cornwall, is still planning to marry her partner Jake Armstrong in 2017. 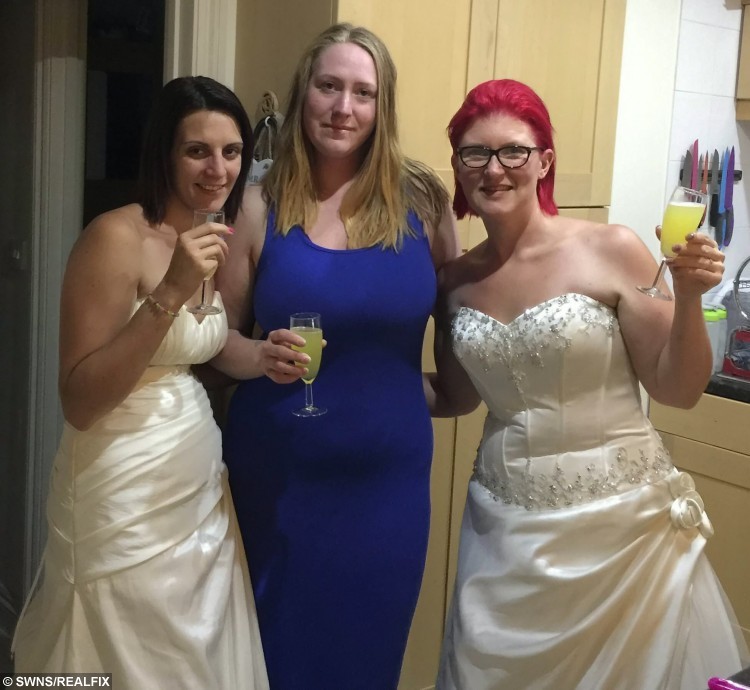