This is the bizarre moment a woman was refused a burger after going in a McDonald’s drive-thru – on the back of a HORSE.

Louise Carter, 48, trotted up to the service window on her steed Oliver and ordered a Big Mac.

But she was stunned when a member of staff refused to serve her, saying the company policy stated drive-thru customers must be “in a car”. 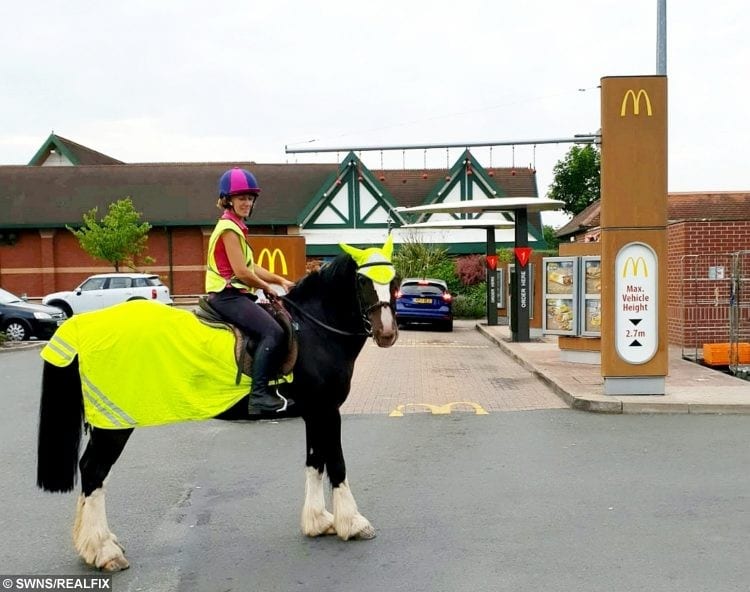 “I never thought I’d have some jobsworth saying that. I know I’m not a vehicle.

“Once you get your mind sorted on a Big Mac you have to have one.

“I thought ‘I might never do this again as I might not have the opportunity, I’m going to
do this’.

“I try to do different things like that to get out of my comfort zone.”

Louise tried to get served at the McDonald’s restaurant on the Malvern Shopping Park, Worcs., on July 11.

The mum-of-two added: “The whole reason for it was because it was going to be so quiet on the road, that’s why I went, it was the semi-final of England.

“I was listening to the football on my phone’s radio which was in my bum bag.”

After being denied her grub, Louise and Oliver cantered next door to Cafe Nero, where she said staff were happy to serve her.

A McDonald’s spokesman said: “Our drive-thru lanes are specifically designed for roadworthy motor vehicles only and are therefore not suitable for horses.

“Our crew advised the customer of this policy and invited them inside the restaurant.”