Jamie Young from Leigh, Lancs., had a 'I love Justin Bieber' tattoo inked after a promise he made if his charity event made more than #1,000. See Ross Parry Copy RPYTATTOO : A BURLY Bolton bouncer has a permanent declaration of love Ã for none other than pop star Justin Bieber. Jamie Young made the promise to get an 'I Love Justin Bieber' tattoo if Leigh music festival Sky Fest II, which he helped to organise, made more than Ã1,000 for charity. In the end the one-day rock music event raised Ã1,200. 18 November 2015.

A burly bouncer has risked his macho reputation by getting inked with a tattoo declaring his love for JUSTIN BIEBER.

Jamie Young, 23, promised to get a “tramp stamp” saying “I Love Justin Bieber’ if he managed to raise over £1,000 for charity at rock festival Sky Fest II last month.

And after hitting his target he went through with his vow and braved the needle with his tribute to the Canadian singer at the bottom of his back.

Jamie said: “Last year I was working as a doorman, but this year I was asked to help with organising the event.

“I decided to help raise more money for charity I would come up with a stunt and do something stupid so I got the idea of getting this tattoo.”

“I then posted on Facebook if we raise £1,000 for charity then I would get a tattoo saying ‘I love Justin Bieber’.

Generous festival goers paid the £5 door-fee instead of buying £3 tickets and Jamie raised £1,200 for the charity Make Some Noise during the 13-hour Halloween festival.

Jamie, from Leigh, Greater Manc., said: “The idea for Justin Bieber all came because someone posted something on my newsfeed on Facebook about what an idiot he is and I thought getting him tattooed on me would be funny.

“I told a couple of people to test their reaction and they laughed, so I posted it on Facebook so there could be no way back.”

“I’ve got no interest in Justin Bieber or his music at all but I’m game for a laugh and find it funny.”

Jamie’s Bieber branding was carried out by a quartet of tattoo artists, Sam Janbi, Heidi Bye, Anthony Canning and Chloe Harris, who set about creating the tagline in comedy “Willy Wonka” font.

The Playboy bunny logo, Hello Kitty logo, Pokémon characters and Lego bricks have all previously found space on his skin.

He said: “Some of the tattoos were part of lost bets and some of them I got done as dares. It was just stupid things we did growing up.” 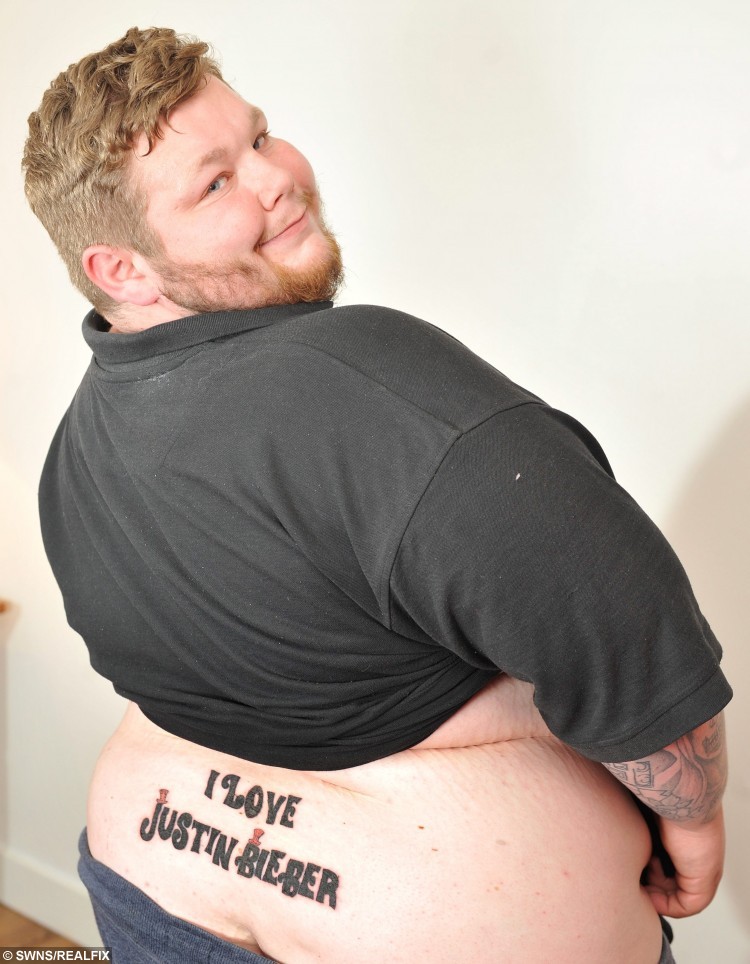 Girlfriend, Rebecca Earley, 23, said: “I got many of them before we started going out six years ago so she is used to what I look like.

“I can’t look at it, so it isn’t really my problem. I had it done in the funniest place that I could have it that was appropriate for work and where I haven’t already been tattooed.”

While hiding the tattoo might not be a problem, explaining Justin Bieber to his daughter Amelia, two, when she grows up may be different if the singer’s career fades away.

He said: “She’ll find out who he is because I’ll tell her. I’ll tell her he was a popstar who everyone like me hated as I grew up listening to rock music while he was autotuned in a studio.”

The Make Some Noise charity helps disadvantaged children and young people across the UK.

Taking the plunge! How could anyone say no to this proposal?