Phileas Mogg, pictured at RSPCA Bristol Clinic, after he traveled 250 miles trapped inside a car engine. The driver suspects Phileas may have been trapped under the bonnet for four days and traveled more than 250 miles through two countries, along two motorways and through a car wash. See SWNS story SWCAT; A mischievous cat spent four days trapped under a car bonnet travelling more than 250 miles - including through a CAR WASH. Colin Woodward thought he heard meows coming from his car but when he checked under the bonnet he couldn't see the pet. He set off from his home near Crewe, Cheshire, spending the following days driving to Wrexham in Wales and then Cheltenham in Gloucestershire. But when he parked up at a friends house near Bristol - four days after leaving home - he once again heard a faint feline cry from his car's engine.

A travelling cat dubbed Phileas Mogg has survived four days trapped in a car engine going 250 miles – and through a CAR WASH.

Colin Woodward thought he heard meows coming from his car but failed to spot anything unusual when he opened the bonnet.

Retired farmer Colin left his home near Crewe, Cheshire and spent the following days driving to Wrexham and then down to Cheltenham in Gloucestershire.

Four days after leaving home he parked at a friend’s house near Bristol and once again heard a faint feline cry coming from the engine.

He looked closer and was amazed to find the cat trapped between the front wheel and the headlight under the bonnet of his Audi A4.

Colin, 68, tried to coax out the frightened pet but it refused to budge so he called the AA who had to remove the wheel and the arch to get it out.

The cat needed treatment for burned paws from the RSPCA who are now trying to track down his owners.

RSPCA inspector Simon Coombs said: “He was lucky to escape with some burns to his paws but it could have been far, far worse.

“I would certainly say if cats really had nine lives he’s lost one of them.”

“His owners must be worried sick about him and we’d love to reunited them with Phileas.”

He added: “It looks like Phileas could have travelled about 250 miles, along two motorways, through two countries and even through a car wash before he was found.

“But it’s also possible he jumped onboard at some point along the way so his owners could come from any of these places.

“He’s a very friendly cat so we’d like to find his owners as soon as possible and get him back home.” 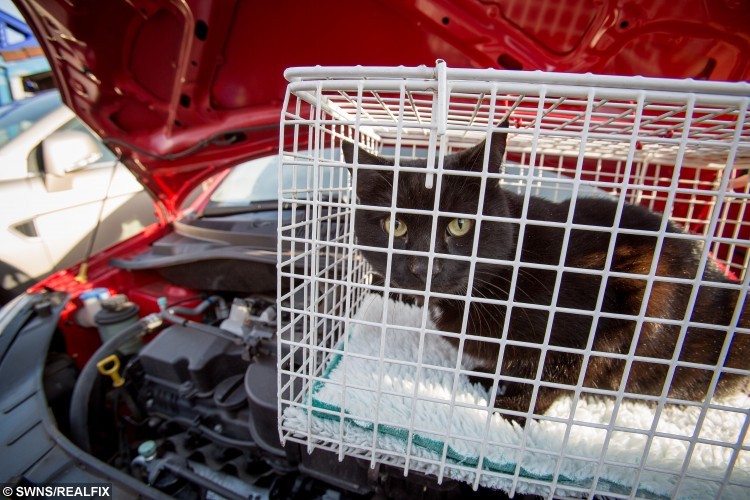 Colin, from Warmington, near Crewe, set off on November 11 and drove to nearby Sandbach and then Wettenhall.

He then went to Bangor-on-Dee racecourse in Wrexham and Cheltenham racecourse before arriving at his friend’s house in Easton-in-Gordano, outside Bristol.

He said: “We followed the noise and found him – I couldn’t believe my eyes. He was between the front wheel and the headlight, I have no idea how he got in there.

“I felt so sorry for him. I have been driving all over the place since Wednesday, I had no idea he was in there, I’m just relieved he survived.

“I left the bonnet open overnight to see if he would come out but when he didn’t I called the RSPCA and the AA for help.

“He’s a lovely cat, I do hope he finds his owners. He will certainly have a tale to tell them about his adventure.”

AA patrol Mark Nolan removed the front wheel off and undertray of the car to enable Inspector Coombs to reach in and rescue the stowaway. 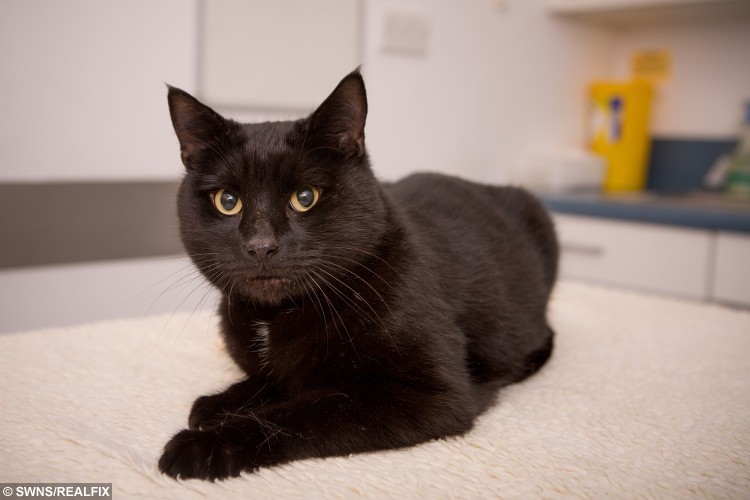 Mark said: “I really hope the owner can be traced as it was such a big, friendly cat – just happy to be rescued.”

Phileas was treated at the RSPCA Bristol clinic for burned paws, but didn’t have a microchip.

Anyone who thinks they own Phileas can contact the RSPCA appeal line number 0300 123 8018 and leave a message for Chief Inspector John Atkinson.