Pictured: Nurse Debbie Evans with Felix the cat who got his head stuck in a can of Whiskers cat food. See NATIONAL copy NNCAT for full story.

Curiosity got the better of a greedy cat after the moggy got his head stuck in a tin of left over cat food.

Felix, an adopted stray moggy who never lost his sense for scavenging gave his owner Sam Wellbank a scare after he rummaged through a recycling bin.

He had to have a general anaesthetic so vets could remove the Whiskers food can from his head.

Now pet charity PDSA is calling for people to keep their recycling bin lids on securely to stop other cats becoming a cropper.

Sam, 34, from Warwickshire, discovered her pet’s mishap when she called him in for his breakfast.

“He spends lots of time outside but never wanders far,” said Sam.

“I heard a clatter as Felix jumped over the fence into the garden and when I looked outside, he was sat on the grass with the food can stuck fast on his head.

“We picked him up but he was very stressed and trying to claw us. He was meowing loudly and was obviously in a lot of discomfort.

“I drove him straight to PDSA for some urgent help.”

Staff at PDSA’s Pet Hospital on Barkers Butts Lane in Coventry rushed Felix straight into surgery to remove the can. 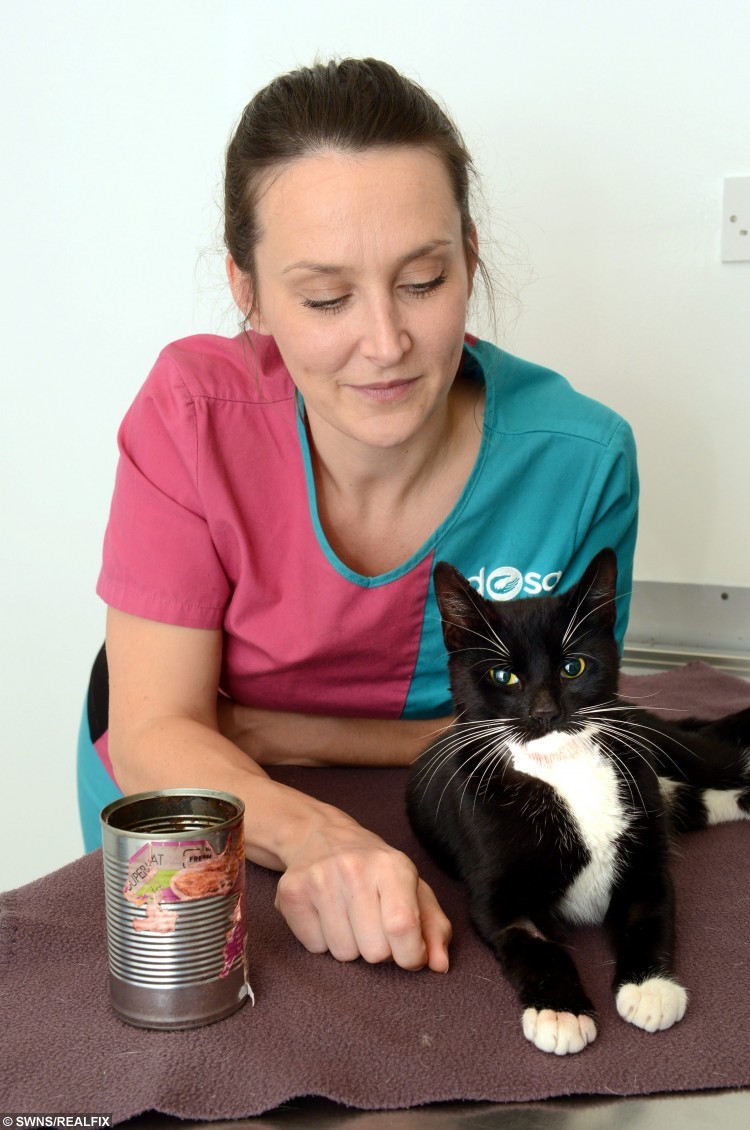 Vet Nurse Debbie Evans, who admitted Felix, explained: “Poor Felix was seriously stressed and we were concerned that he had injured himself on the sharp lip of the can in trying to free himself.

“There was also a worry that he would suffocate so we needed to act quickly.”

The PDSA is calling for people to consider the perils of pets foraging through their cans and glass.

“The sharp edges on tins and glass cause obvious risks to pets and wildlife, so we’d recommend keeping recycling covered or enclosed, if at all possible,” said Debbie.

“It you have to keep your recycling boxes outside, make sure that all food containers are rinsed thoroughly to remove any tempting smells and flatten tin cans to stop mischievous pets from getting stuck, like Felix did here.”

Sam said: “Felix adopted us and the kids absolutely adore him.

“I can’t thank PDSA enough for all their help – they were great with Felix and with us too as we were all pretty worked up and worried!”

With 51 Pet Hospitals across the UK, the charity administered 2.7 million treatments to 470,000 pets last year.