Paul Brown in a Superman suit entirely out of balloons. They say that heroes come in all shapes and sizes, but one Staffordshire magician has launched one of his biggest projects to date Ã a series of inflatable superheroes. See NTI story NTIBALLOONS. Paul Brown, 47, who runs entertainment business Magical Mayhem, first created an Incredible Hulk body suit out of balloons last week to see if it was possible. It has since became an internet sensation, with more than 160,000 'likes' on Facebook. Now Paul, from Brizlincote Valley, has decided to create a whole series of balloon superheroes, as part of a project to inspire young pupils in schools. Paul, who has been doing balloon modelling for 30 years, said: "This is pushing balloon modelling to its absolute limits. Each of the balloon body suits takes me around eight hours. I'm really proud of it to be honest." This week Paul made Superman out of balloons, in two weeks' time he will create a Captain America, and there are also plans to make a Batman or a Spiderman. He now wants to start balloon workshops in schools to get kids interested in it.

Super-dad Paul Brown has become an internet sensation after he built life-size Incredible Hulk and Superman costumes – out of BALLOONS.

The 47-year-old spent eight hours creating an inflatable Incredible Hulk body suit in his dining room last week as a surprise for his two children.

He used 60 balloons to make the full-size green suit which comes complete with the trademark blue shorts and gigantic muscles.

He then decided to create a series of inflatable superheroes after his Hulk creation went viral and received over 160,000 likes on Facebook.

Paul has now spent another eight hours making a Superman outfit out of a staggering 220 balloons.

The magician, who has been doing balloon modelling for 30 years, said he now plans to create Captain America, Batman and Spiderman suits.

Paul, who lives with his wife Kirsty, 37, son Sammy, eight, and daughter Molly, six, in Burton-upton-Trent, Staffs., added: “This is pushing balloon modelling to its absolute limits.

“I decided to do a project with the theme around superheroes. If I can see something in my head then I can built it with balloons.

“Each of the balloon body suits takes me around eight hours. I’m really proud of them to be honest.”

“The Hulk was only about 60 balloons but the cape for the Superman one took 100 and I had to weave them together so it took two hours just to do that.

“A lot of the time is planning because I often have to start again but the Superman one was 220 balloons in total.

“This is just my passion. For some people it’s golf or football but for me to sit there in my house with hundreds of balloons is my playtime.

“My wife walked in to the dining room one day and there was popped balloons and body parts everywhere and she just rolled her eyes.

“I’ve had some of the biggest balloon artists in the world asking me about the blueprints and how I have made them.”

Paul, who runs entertainment business Magical Mayhem, has given his Incredible Hulk and Superman suits away to children he thought deserved them.

He said the inflatable costumes, which last for a week before the go flat and soft, would be worth around £400 each because of the time they take to make.

The magician has decided to create a whole series of balloon superheroes as part of a project to inspire children.

He is planning on taking his balloon workshops into schools in the new year to help pupils with team-building skills.

Paul added: “I have done an 8ft Christmas tree in the past and my usual creations are two-foot tall Elsa’s or minions for the birthday boy or girl.

“Over the years I have realised kids will wait for 40 minutes just for one balloon, that’s how passionate they are so I want to take it to the next level.”

“I needed a trigger that would capture the imagination of the kids and superheroes appeals to both boys and girls.

“I want them to be able to walk into a classroom filled with 1,000 balloons and to have the chance to create a superhero.”

“The next time you blow up balloons, let a little bit of air out of it before you tie it up which lessens the chances of it going pop.

“That’s what I do to soften the balloons so I you can really play with them and make it do what you want.” 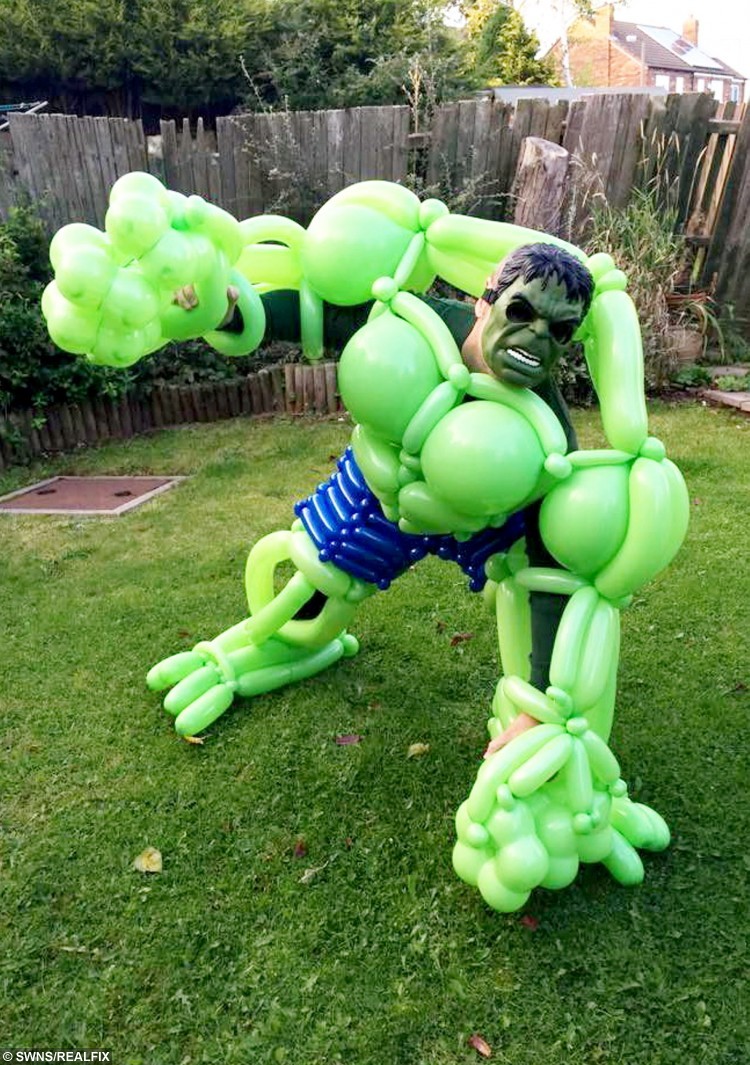