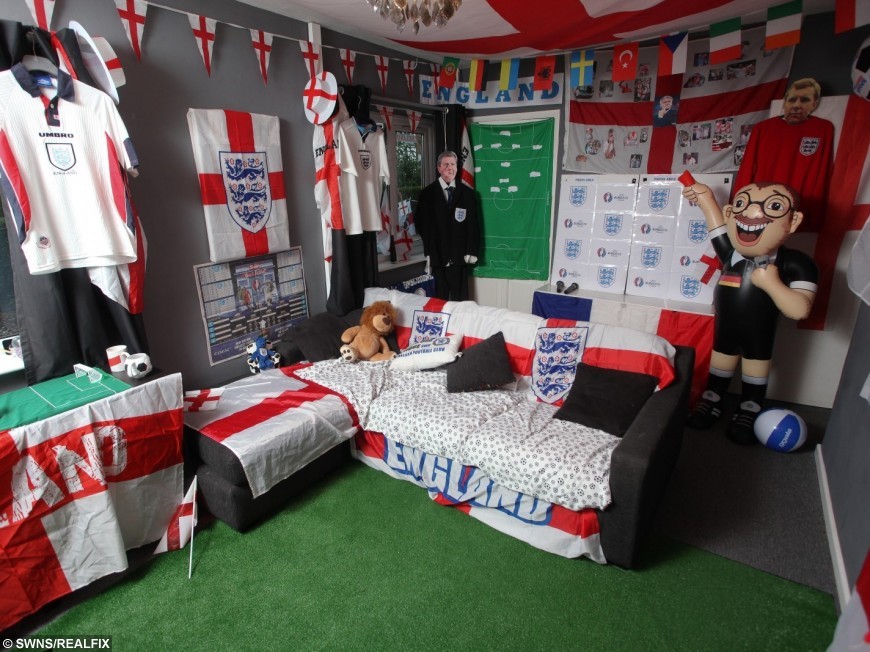 An England superfan is cheering on the team in style during the Euros after he converted his living room into a football stadium – complete with a fake grass PITCH.

Patriotic Ben Rogers, 30, has decked out every inch of the room with England flags, banners and 50 metres (164ft) of bunting.

The Chelsea fan has also put home-made goalposts either side of his TV and made a replica European Championship trophy out of paper mache with his children.

Footy-mad Ben even made a life-size Roy Hodgson by adding a cardboard picture of the England manager’s head on to one of his suits.

And the ultimate Euros man cave is completed by a tactics board and a mocked-up press area so his kids can conduct post-match interviews. 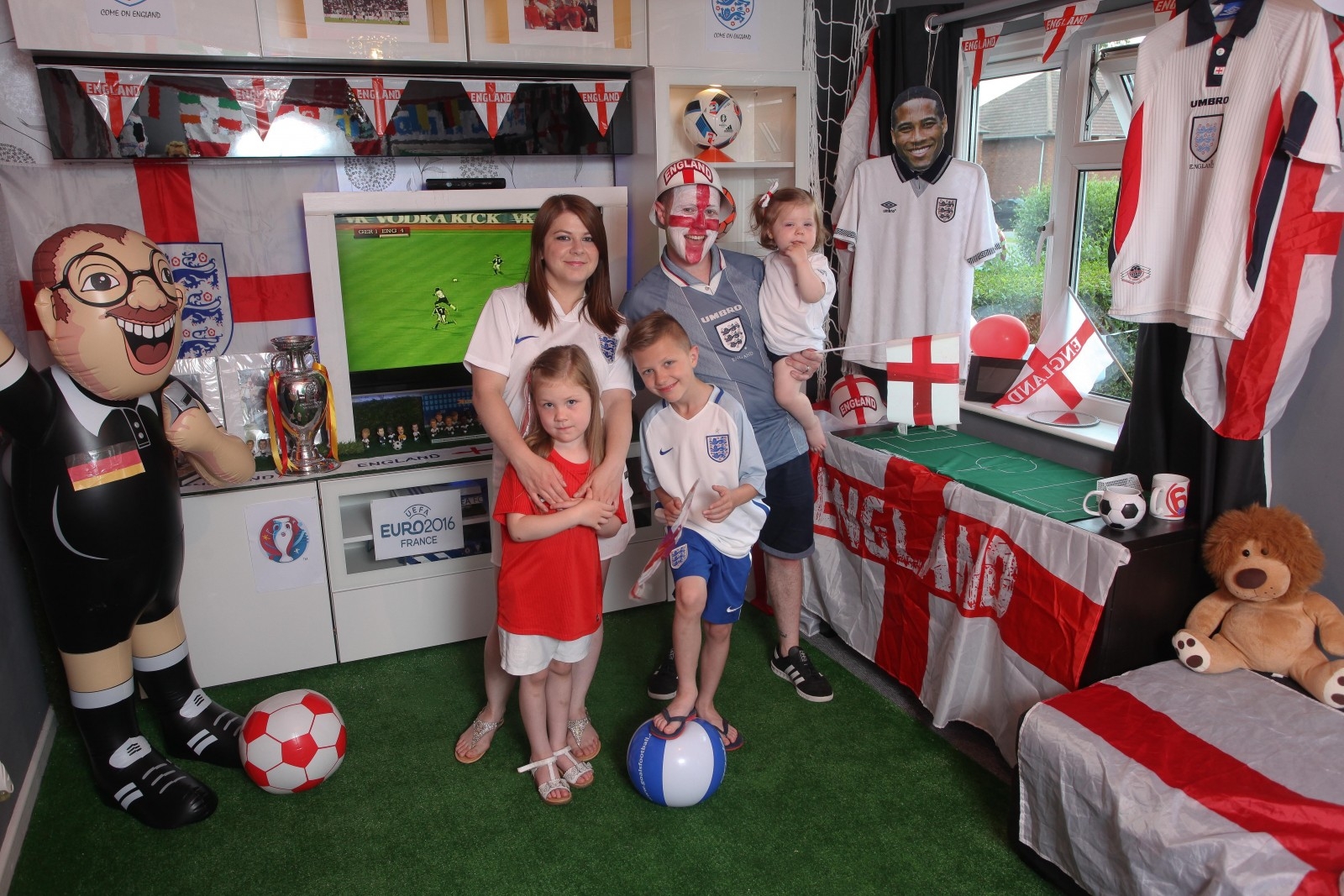 The superfan dad surrounded by his suffering long-wife and children

The front of the family home in Leicester is also covered in patriotic bunting and a 9ft England flag while the back garden is home to a miniature football pitch.

Enterprising Ben used gloss to make the white pitch lines and was donated grass seed by his beloved Chelsea FC after he sent them a picture of his efforts.

Incredibly, sales assistant Ben has only spent £50 on turning his semi-detached house into an England shrine, which took him a day-and-half to complete.

The dad-of-three said: “I’ve always been a massive England fan and I’ve always put England flags out for the World Cups and Euros.

“A few weeks ago I just sat there thinking how could I take this up a level and then I was looking at the floor and thought that’s a possibility.

“Then I was looking at the tele and it just snowballed from there really. 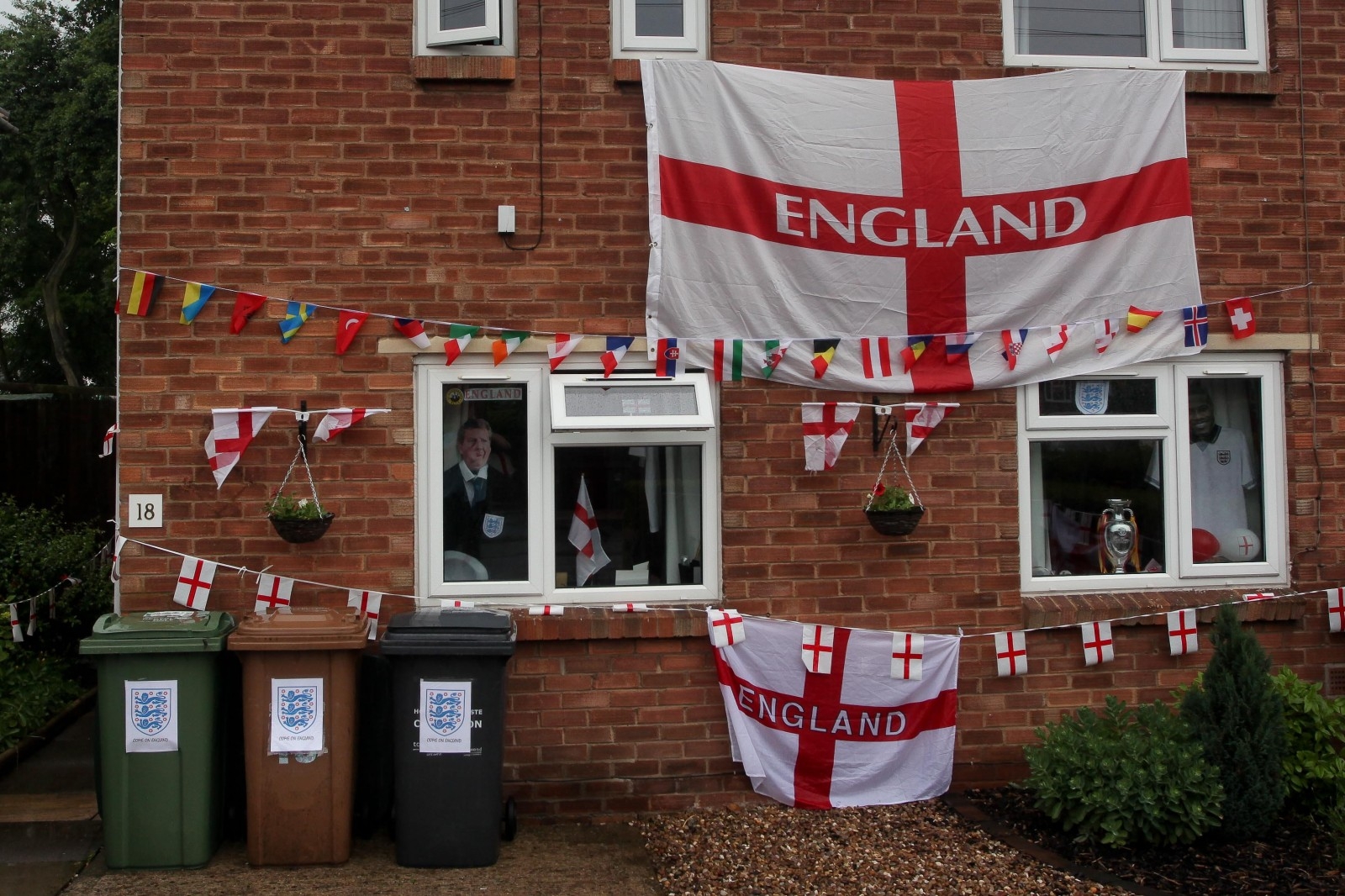 “I pulled the rug up and fitted the astro turf over the top of the carpet. Then we’ve got a press area behind the settee which I made by putting sponsors over a backing board.

“I’ve made a life-size Roy Hodgson and he is facing out of the window so anyone who walks past can see him looking out.

“We’ve got a tactics board using a Subbuteo pitch and I printed pictures of the England players so my son can get used to the tactics.

“And there’s posts around the TV so it looks like a goal.

“This year the newest edition is 4ft tall inflatable referee who is holding up a red card.

“A lot of it has been homemade. I made the goals out skirting board in the shed and the England flags have been accumulated over the years.

“It is for the memories for the kids really, they love it and I suppose I am lucky my wife lets me get away with it.

“She is not massively keen on it and she vetoed a plan I had for the kitchen to put German flags everywhere as a back up in case England get knocked out.

“But it is not very often I get to do it so she lets me have my little moment.

“My mates think I am nuts and my mum just shook her head when she came around.” 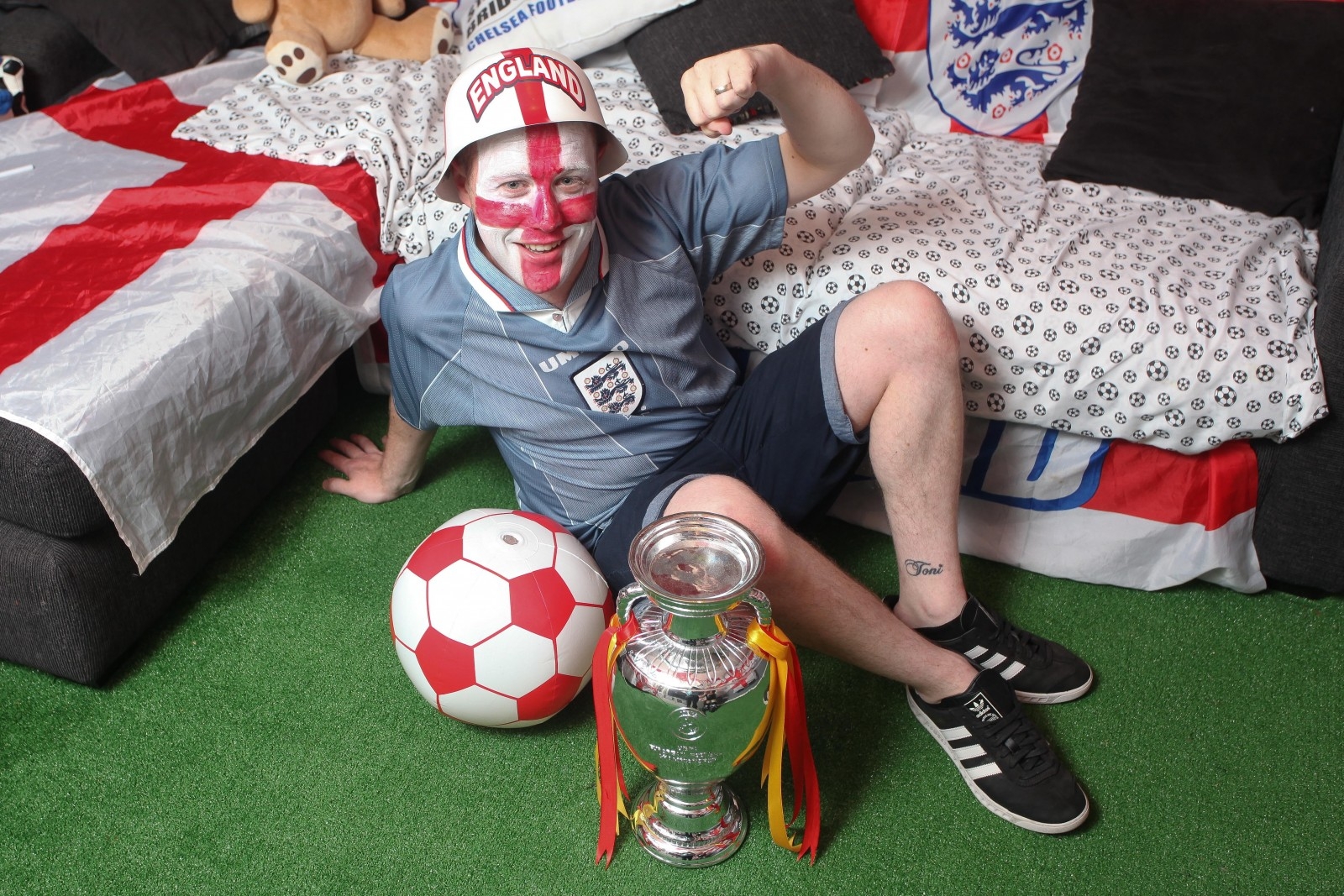 Incredibly, Ben, his wife Toni, 30, and their son Charlie, ten, and daughter Lucy, six, were all born during a World Cup year.

And the football-mad dad, who also has a 16-month-old daughter Alice, plans to watch England’s must-win clash with Wales from his Euros den.

He added: “I think it was written on the cards that Russia were going to equalise, I could see it coming.

“We never make it easy for ourselves and I wouldn’t be massively surprised if Wales win but I am confident about England’s chances.

“I started watching football in 1996 so I have got a lot of good memories from that. In my head I like to think we can bring back some of those magic moments.

“And you never know we could end up going all the way if that happens.

“The deal with the missus is when England get knocked out I have to tone it down and take some of the stuff down so hopefully we will go far.

“But the astro turf is staying until the final.”

WIfe Toni, a full-time mum, said: “As long as it’s all packed away before the end of the summer don’t mind watching my soaps in a football pitch.” 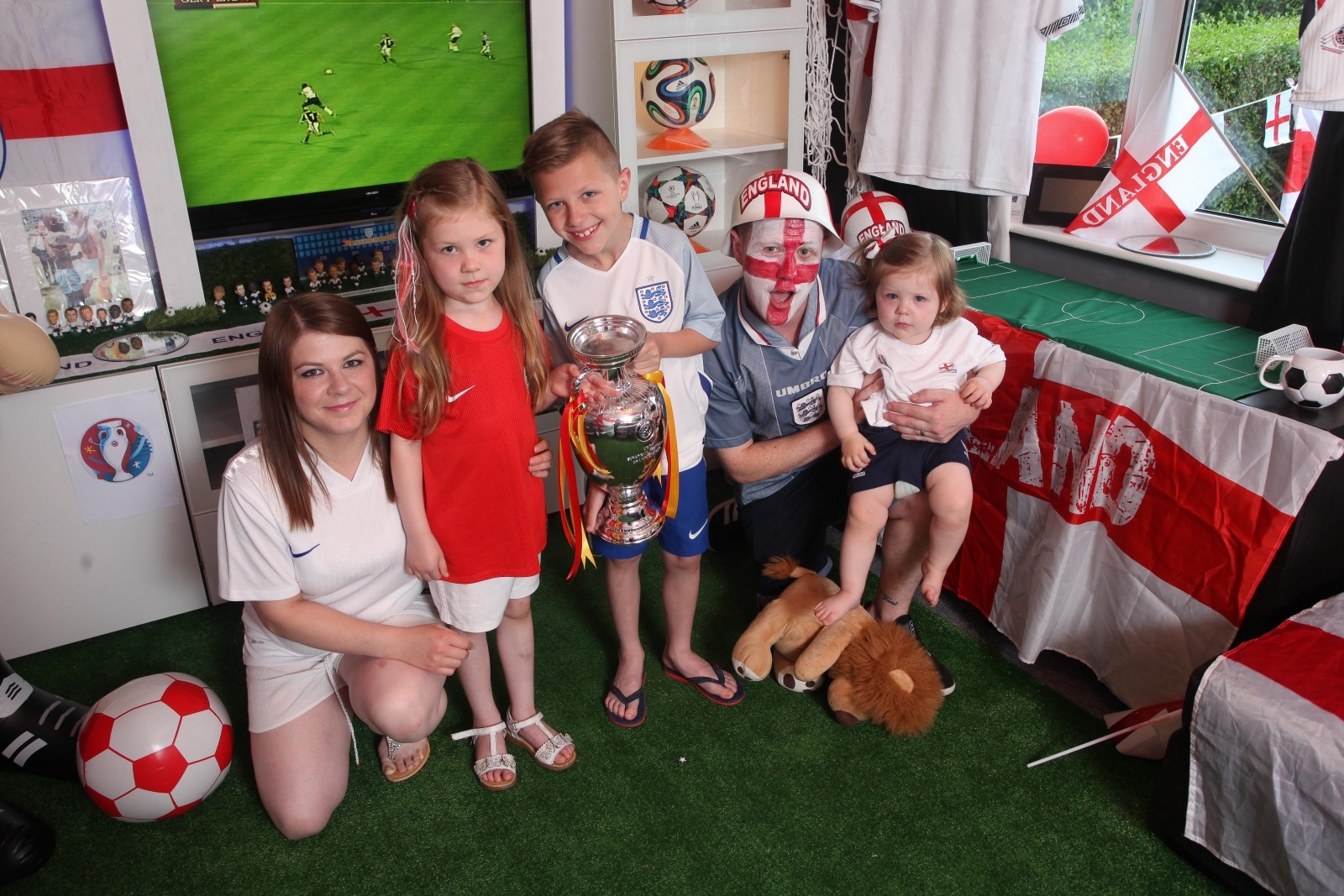