Erasing the competition! Have you got a collection to rival this one?

Picture shows nine-year-old Matthew Waring of Goosnargh, Lancashire. who has a collection of more than 3,500 rubbers. See Ross Parry copy RPYRUBBERS : A nine-year-old lad has a quirky ambition to make it in to the record books by amassing the largest collection of rubbers the world has ever seen. Matthew Waring is so determined to grasp the the coveted title that he has managed to amass more than 3,500 erasers over the past few years. Proud of his work in progress, award-winning vegetable grower Matthew occasionally gets his rubber stash out and puts them on display, or to play with them when his friends come round. Mum Heather explains: "We got him the Guinness Book of Records one year for Christmas, and he decided he wanted to beat one.

A British nine-year-old has rubbed out the competition after asmassing the world’s largest collection – of ERASERS.

Matthew Waring loves the stationery items so much he has collected more than 3,500 erasers over the past few years.

Proud of his work in progress Matthew occasionally gets his rubber stash out and puts them on display, or to play with them when his friends come round.

Mum Heather explains: “We got him the Guinness Book of Records one year for Christmas, and he decided he wanted to beat one.

“He read about a woman in Germany who has 19,000 rubbers, and he chose to try to beat that; he’s still got quite a long way to go.”

“She started when she was nine, so he’s started at a good age.

“You’re not allowed to have two of the same kind, so everywhere we go, we look out for new ones, and family and friends always bring some back if they’ve been away somewhere.

“He gets at least one every week. When he comes home from school on a Friday I give him a new one, eBay is a wonderful thing!”

At the last count Matthew, of Goosnargh, Lancs., had around 3,500, which he sorted into sections of 100 during last year’s summer holidays. But, since the last count his collection has expanded.

Heather added: “I wouldn’t like to think how much money we’ve spent on them all.

“They vary from about 10p to £1, but you can find some real bargains on the internet.

“People also sell their collections online, so we bought someone’s collection of about 40 erasers a couple of years ago – they can go for quite a price, though.

“I think his favourites are Iwako erasers from Japan, they come in all sorts of shapes and sizes, with characters, cakes and animals.”

Matthew who helps look after the animals on his family farm, and who also enjoys swimming and indoor climbing, says: “I chose to collect rubbers because I already had quite a lot, because I like art.

“At first it was easy but then once I had quite a lot, it became harder.” 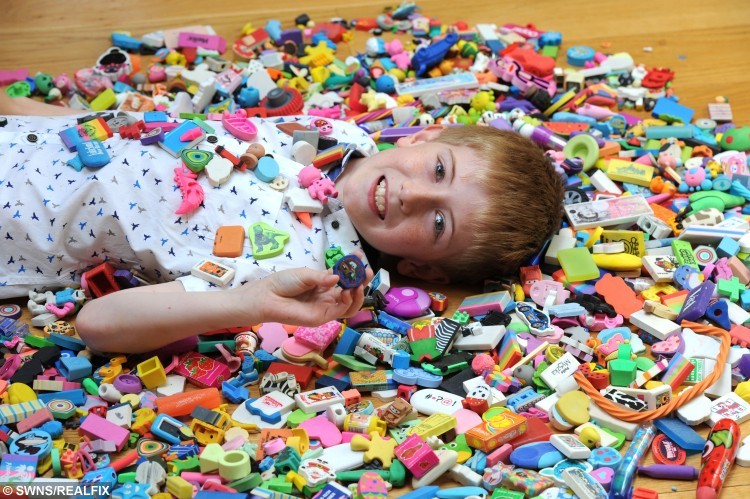