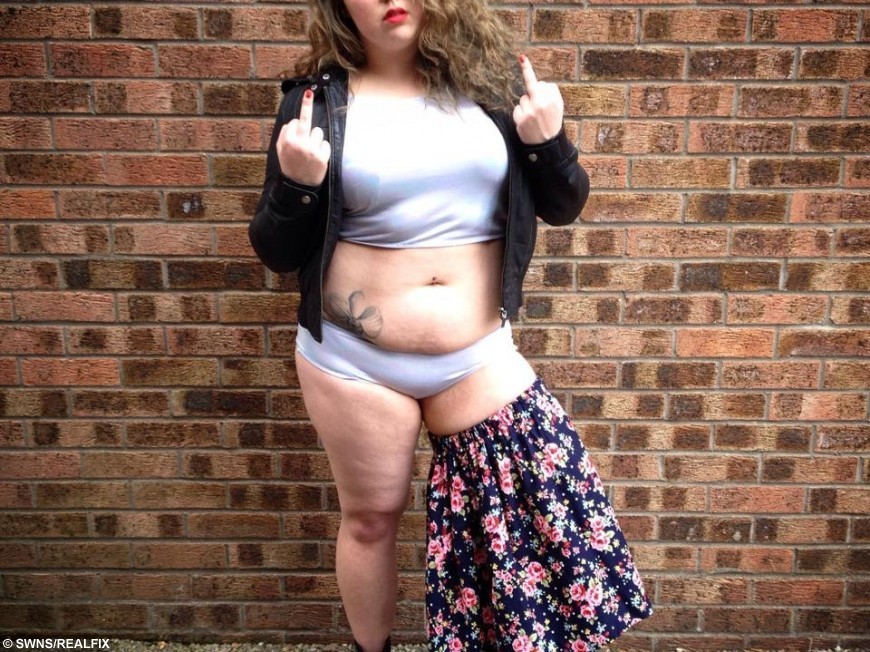 A curvy fashion designer hilariously hit out at an online clothing shop after they advertised a pair of plus-size shorts using a petite model – standing in ONE LEG.

The listing by shop Wish featured a slim model with both of her legs inside of the left leg of the £7 black shiny shorts – wearing them like a skirt – while stretching out the other leg.

It was spotted by fashion designer Christina Ashman, 27, who was horrified by the image, which she accused of “shaming” larger women.

Confident Christina from Bristol hit back with her own hilarious image of herself with a small skirt worn on “one pretty thunderous thigh”, mocking the original ad.

She posted the photo on the Facebook page of her clothing company Interrobang Art & Fashion and it has been shared around the world more than 1,000 times.

She said: “I saw the advert on Facebook after HelloGiggles did an article on it and it came up in my news feed.

“I thought it was ridiculous.

“You don’t sell clothes by shaming the target audience.

“It’s fine if you’re using a small model in small clothes, but to put a petite model in one leg of some plus-size shorts is just unnecessarily insulting.

“I just thought if they can put a whole petite woman in one leg of some plus-size shorts, then I should do the opposite and put one leg in a small skirt!

“I just wanted to highlight how absurd their marketing was.” 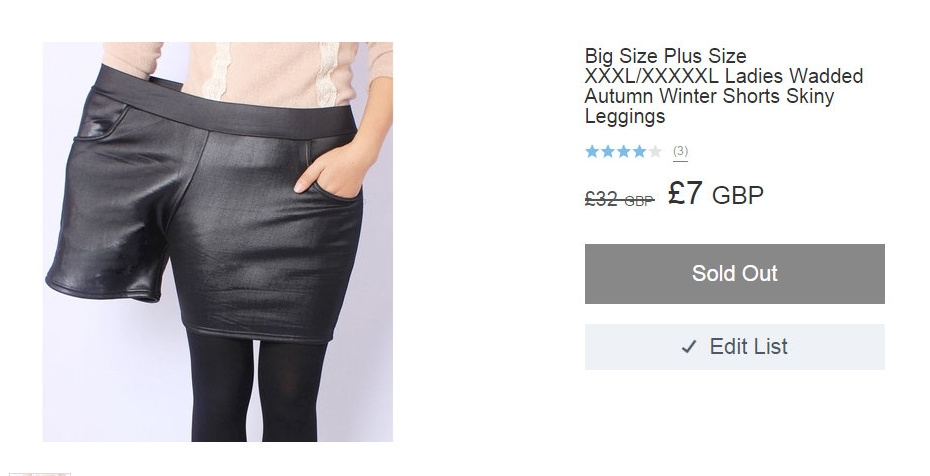 The original advert by American-based Wish has caused Christina’s response to be shared on Facebook more than 1,000 times

The skirt being sold by American-based Wish was listed as ‘Big Size Plus Size Ladies Wadded Autumn Winter Shorts’ and sold in sizes XXXL TO XXXXXL.

She did her own version – wearing one of the skirts she has made for her fashion line and sticking up her middle fingers – and posted it on her shop’s Facebook page on March 11.

Her accompanying post said: “I don’t have any formal qualifications in marketing, but if plus size ladies buy shorts based on how one leg looks on a whole petite woman, then maybe smaller ladies will buy skirts based on how the whole thing looks on one pretty thunderous thigh.”

Christina, who sells handmade clothes in sizes 6-36, said: “I wasn’t expecting it to go this far, it was just aimed at my usual audience – we’re a very body positive group.

“But as it’s got further away from my own audience the comments have become quite unkind!

“But that just goes to show how important this is.

“Everyone has the right to be in their own body, whatever size, shape or colour, without others judging them or trying to make them feel bad. I’m all about body positivity.”

Wish has not yet responded to a request for comment.