Find out the secret behind the world’s biggest leek!

A chuffed gardener was ‘In The Mood’ to celebrate after growing the world’s biggest LEEK – by playing it GLENN MILLER music.

Green-fingered Paul Rochester, 57, has smashed his own existing record with his massive vegetable weighing in at 23lb 4.02 oz. (10.5kg).

Dad-of-two Paul, from Seaham, County Durham, grew the whopping leek using a tip passed on to him by his late father Wilfred.

His dad was a champion veg grower and told his son his secret was filling his greenhouse with Glenn Miller swing music – including ‘In The Mood’ and ‘Moonlight Serenade’.

Paul’s beat the existing world record set by himself last year – when he grew a 21lb 8oz (9.75kg) leek – when he unveiled the plant at the Malvern Autumn Show, at the Three Counties Showground.

He said as well as the music his tips for top results are plenty of water, good fertiliser and “lots of TLC”.

He said: “I was invited down there by the organiser of the event, and I promised to try to break the world record again.

“It’s a big achievement to have done it, and I’m over the moon about it. There were people at the event from all over the country, and to win it left me chuffed.

“We raised the bar now.”

Paul, who works as a machine operator, shared his allotment with his father, who taught him gardening skills.

He then took on the whole plot when his father died in 1997 at the age of 69, concentrating on growing onions and leeks.

Now he is part of a community of big veg growers on social networking site Facebook, and was invited to the event by organiser Kevin Fortey in the hope he would break another record.

Paul added: “I’m part of the giant vegetable community on Facebook, and people from as far away as Australia are on it.

“I joined up and the organiser messaged me, asking me to take some leeks down and try to break the world record again. I could have entered a local competition at Harrogate recently, but I promised Kevin that I would keep hold of one to take down to his show.

“All of the lads in the giant vegetable community were saying I was going to smash the record again this year, so to have done it is fantastic.”

Paul also produces carrots, parsnips, potatoes, cauliflower, cabbage and tomatoes among other vegetables on his allotment. 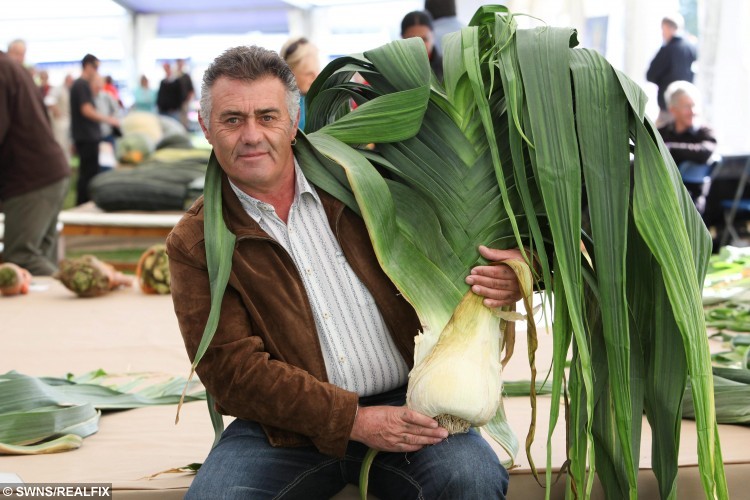