Gardener stunned when pineapple grows from fruit he bought eight years ago!

A gardener who planted a pineapple he bought at Tesco eight years ago is stunned – after it sprouted into a tree bearing fruit.

Fred Lovatt, 79, sliced off the spiky top and shoved it in pot full of soil with fertiliser which he popped on his dining table.

He has watered it ever since and watched it grow into a 3ft tall tree – which sprouted a bulb last month which has now grown into a perfectly-formed pineapple.

The fruit only normally grows in tropical conditions – but Fred, of Cirencester, Glos., has done nothing else to make his plant grow.

“All I did is, about eight years ago, I bought this pineapple from Tesco,” he said.

“I used to work there and I thought, ‘I reckon I could root one of them,’ and I tried it .

“I cut the top off and rooted it into a pot, about 10 inches deep, and left it in my house.

“I’ve got it in the house on the table in a pot. It is in the same pot I planted it in originally.

“I didn’t really bother with it. I didn’t do anything to it except water it, I didn’t even give it any feed.”

Pineapples typically take two and a half years to grow and are native to southern Brazil and Paraguay.

The fruit spread throughout South America, and eventually reached the Caribbean, Central America and Mexico.

Fred says he’s shocked that the pineapple grew in the UK despite the chilly climate because development tends to be stunted if temperatures fall below 15°C.

And though it’s slightly smaller than one you’d buy in a supermarket, he’s proud of his remarkable achievement. 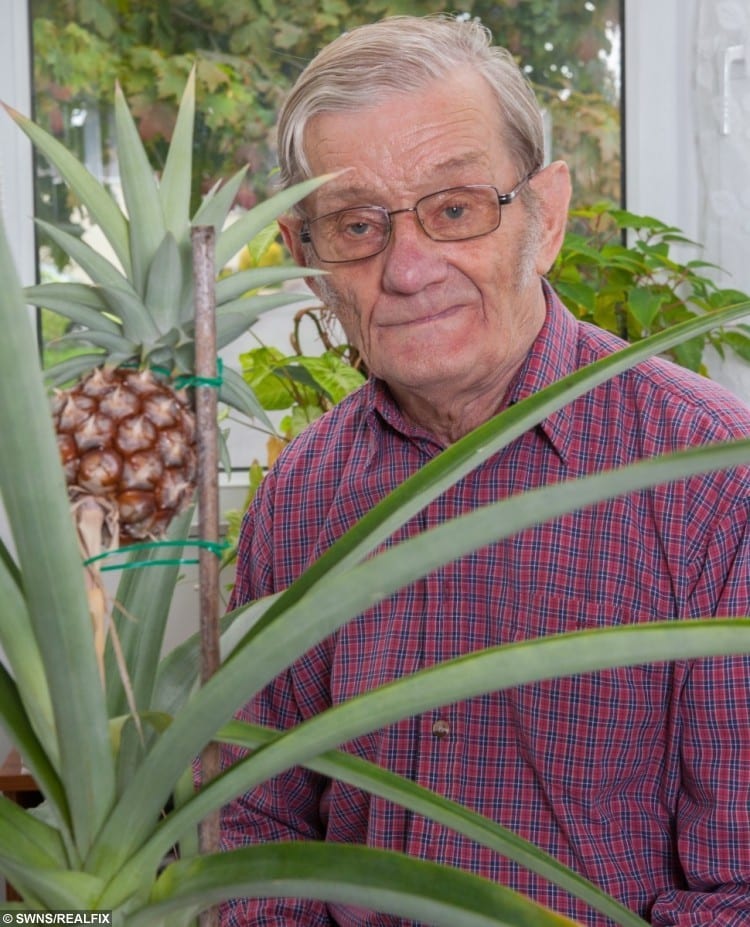 Fred, who lives with his partner Vera Webb, added: “It is not as big as a normal pineapple but it is quite big. It is the same as any other pineapple apart from that.

“I didn’t think it would fruit I just thought it would grow so I’m quite happy with it.”

“It is a bit unusual really.

“I don’t know what I’m going to do with it, I guess it will just die because I don’t want to eat it.”

Fred isn’t the first Brit to grow a pineapple.

In 2003, Ben Duckworth, then aged 11, grew one from a cutting he planted when he was just five years old in Newark, Notts.

And earlier this year, Edward Simpson, 84, found one growing in his south-facing home in Huddersfield from a pineapple top he’d planted eight years previously.