The Howick House of Terror "Zombie Apocalypse " attraction in Preston, Lancs., that will be open to the public on the Halloween weekend. Chris Walton from Preston, Lancs., has created the ultimate scary Halloween experience for the public to come see and by spooked by. See SWNS story SWHAUNTED; A family have spent Ã20,000 transforming their home into a real-life haunted house for a huge public Halloween party. The Waltons are expecting more than 1,000 people to attend their two-day extravaganza this weekend, and hope to raise over Ã2,000 for Cancer Research. They have built five extra temporary rooms in their driveway, converted their garage and turned their garden into a 'Zombie Apocalypse' zone with 11 themed areas. Now in its fifth year, the Howick House of Terror party makes their home in Preston, Lancashire, the most decorated in Britain. It takes the dedicated family 10 months of planning, and includes a Zombie's House, Dracula's Lair and a Haunted Carnival, with animatronics and video screens.

This amazing video shows a Halloween-mad family who have spent £20,000 converting their home into a haunted house that wouldn’t look out of place in a theme park.

The Waltons have splashed out on film-quality costumes and pneumatic props from the US to make their house into a ‘Zombie Apocalypse’ for a huge public party.

The two-day extravaganza at their modest family home in Preston will be open to anyone and is free entry, and they are expecting more than 1,000 people.

The annual party is in its fifth year but they have taken it even further this year by creating 11 themed rooms, and they hope to raise over £2,000 for Cancer Research.

To make enough space for all the props and people they have built five temporary rooms in their drive and converted their garage and garden. 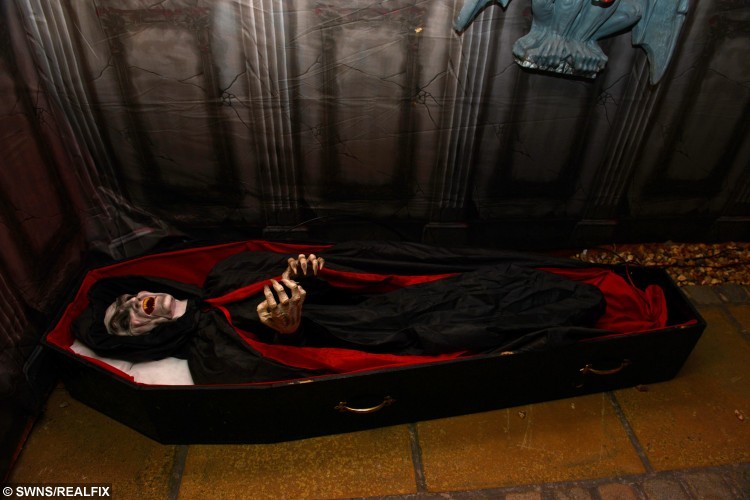 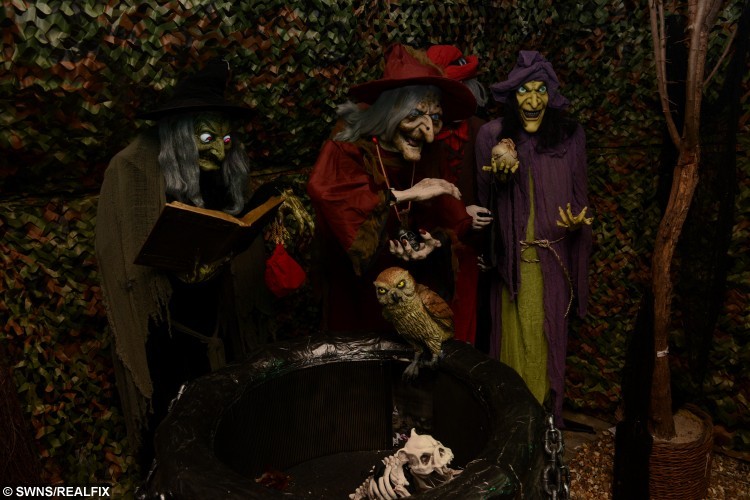 The Howick House of Terror party makes their home in Preston, Lancashire, the most decorated in Britain.

It takes the dedicated family 10 months of planning, and includes a Zombie’s House, Dracula’s Lair and a Haunted Carnival, with animatronics and video screens.

Dad Chris Walton, 48, is so dedicated to his spooky house, he and his girlfriend even went to a convention in the US to source the best props.

“I am definitely a big kid,” he said. “I love dressing up and having parties, and it’s escalated from there.

“Every year we decorated the house a little bit more to the point where passers-by asked to come and have a look.

“People can come in for free but we ask for donations, and our chosen charity this year is Cancer Research.”

“This year is the first time we’re using pneumatic props rather than electric ones, so we can control the speed and ferocity.

“Strangely it is tends to be the clowns that scare people most of all.” 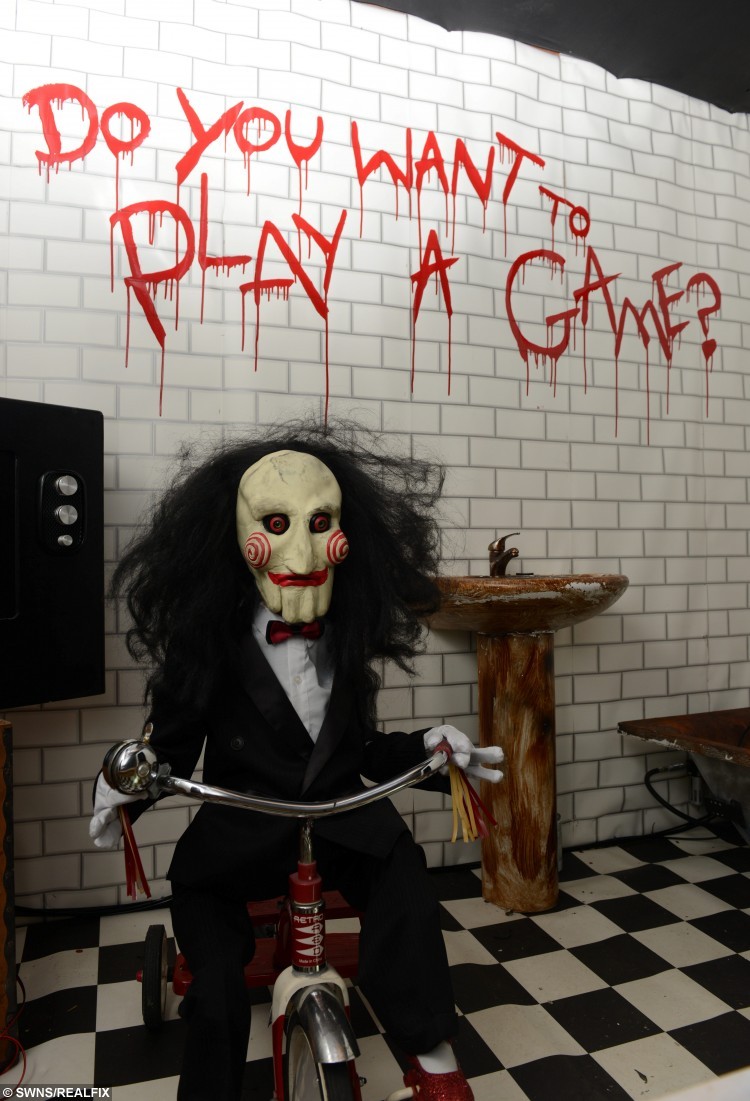 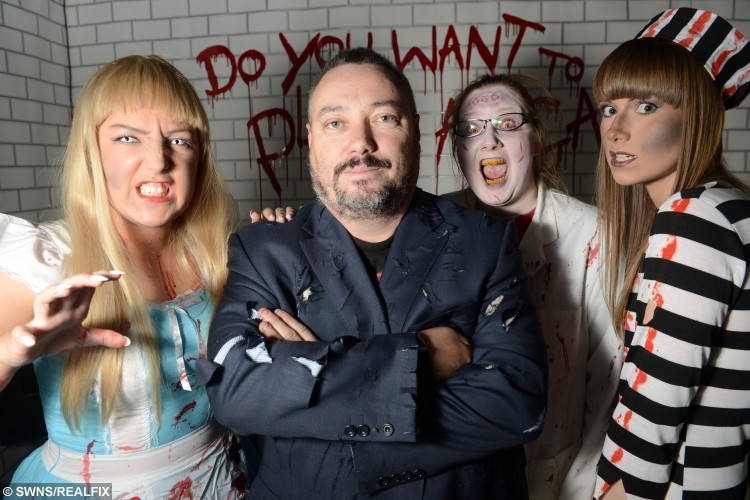 The family have gathered 50 props for the party, including a clown on a tricycle to resemble Billy The Puppet from the horror film Saw and an Exorcist movie themed room.

The party began as a modest fancy dress party for family and friends 10 years ago and has now exploded into a public party that attracts considerable attention in the area.

Chris, who runs a radio-controlled helicopter company, has now handed over the organisation to his daughter Frankie, 19, who is studying at the University of Chester.

“We’re on target I think. Last weekend we had our friends round as a test run, to make sure everything worked” she said.

“We wanted to step up the scare factor this year so we have added an optional room which is the scariest.”

“The neighbours are always supportive of the party, as quite a lot of them have kids anyway.” 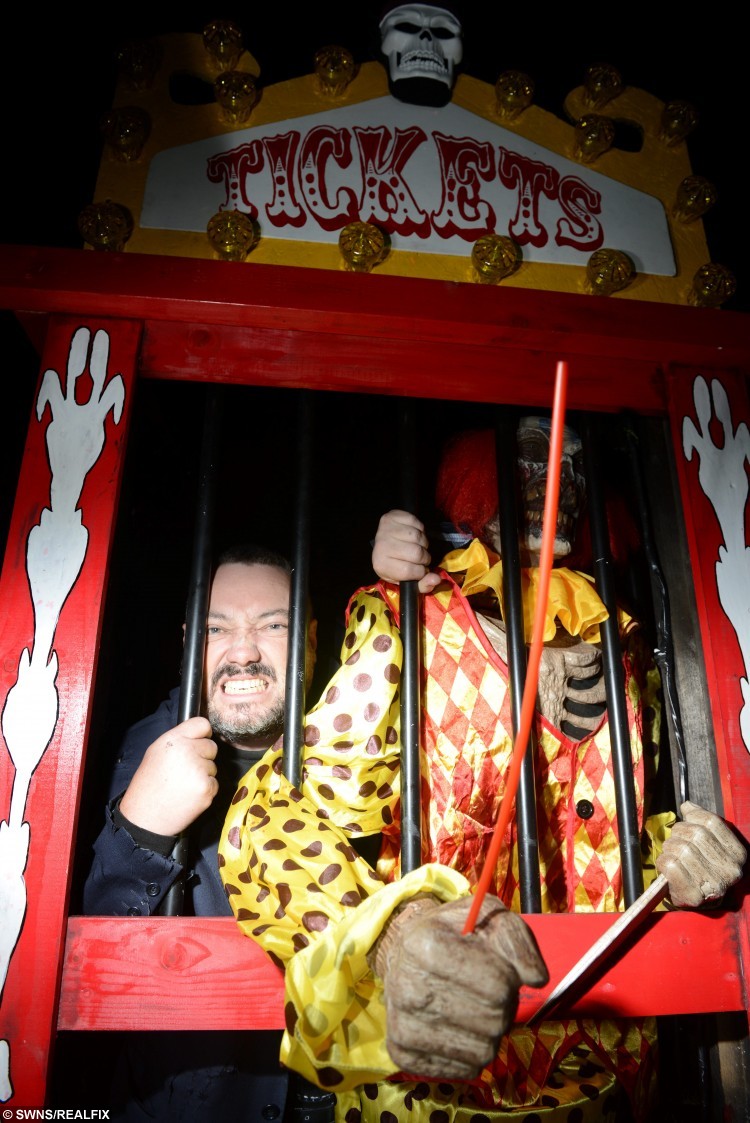 Stay-at-home dad carves out a career as a pump-KING!

Stay-at-home dad carves out a career as a pump-KING!