‘It’s me or them!’ Wife’s warning to trainer obsessed husband

Trainer collector Jason Oxlee of Leeds. See rossparry copy RPYTRAINER: Trainer-mad Jason Oxlee has been told "it's either me or the Adidas" by his weary wife who's threatening to do a RUNNER - as his out-of-control collection has started to take over their home. The 44-year-old has a staggering 150 pairs of the classics trainers - with 50 pairs stuffed under the bed and around 100 pairs stashed in the loft.

Trainer-mad Jason Oxlee has been told “it’s either me or the Adidas” by his weary wife who’s threatening to do a RUNNER – as his out-of-control collection has started to take over their home.

The 44-year-old has a staggering 150 pairs of the classics trainers – with 50 pairs under the bed and around 80 pairs stashed in the loft.

The other 20 are stuffed in nooks and crannies around the home.

He spends around £100 a month on his habit – which is limited exclusively to Adidas footwear – and bases his whole outfits on his shoes – working “from the feet up” when deciding what to wear.

Now, his patient wife of eight years, Faye, 36, has told him he has to stop the sports shoe spending or she will call it quits.

The call handler said: “I’ve always known he loves trainers and over the years I’ve seen his collection grow and grow but now there isn’t the room for them. He even keeps the boxes.

But size nine Jason, from Leeds, West Yorks., doesn’t know if he can control his compulsion.

He even wants two of his children to share a room so his footwear can have their own space.

The site manager is always on the look-out for new releases and limited editions and reckons the re-sale value of his collection will be worth around £15,000.

Mum-of-three Faye said: “Jason spends a lot of money on his trainers and I don’t mind because I know he loves them and it’s his hobby.

“But it’s the space – we don’t have room for him to keep adding to his collection.”

“I’ve told him that if he continues there will be more than enough room in this house for his shoes – because I’ll be gone.

“I do put a stop on it now and again, if he’s had a bit of a splurge I will put a ban on him for a couple of months but when he’s allowed to buy them again he can end up buying two or three pairs.

“He did calm down a little bit when the kids came along but he has so many trainers that others don’t think it’s normal.”

Jason said: “I wasn’t happy when I had to start putting them in the loft, it means I can’t get to them as easy. I’m thinking that if we get our two girls to share a bedroom, I can use one of their rooms.”

Jason’s obsession began when he was around 14-years-old.

He said: “Trainer obsession exploded in the 80s, it was all about the fashion and Leeds United – football – and the music we were listening to.”

He is not the only one to collect these trainers – being a “sneakerhead” is quite a phenomenon, with websites dedicated to the hobby.

Jason said: “It was kick-started by Liverpool fans going to Europe for all their cup matches in the 80s and coming back wearing these amazing trainers.”

Jason’s first pair were red Adidas Jeans, but they were nicked from the changing rooms during PE – though he is hopeful they will be re-released late this year.

He once camped out on the snow for a limited edition pair that were to be release exclusive to a shop in Manchester where only 500 of the style were made. 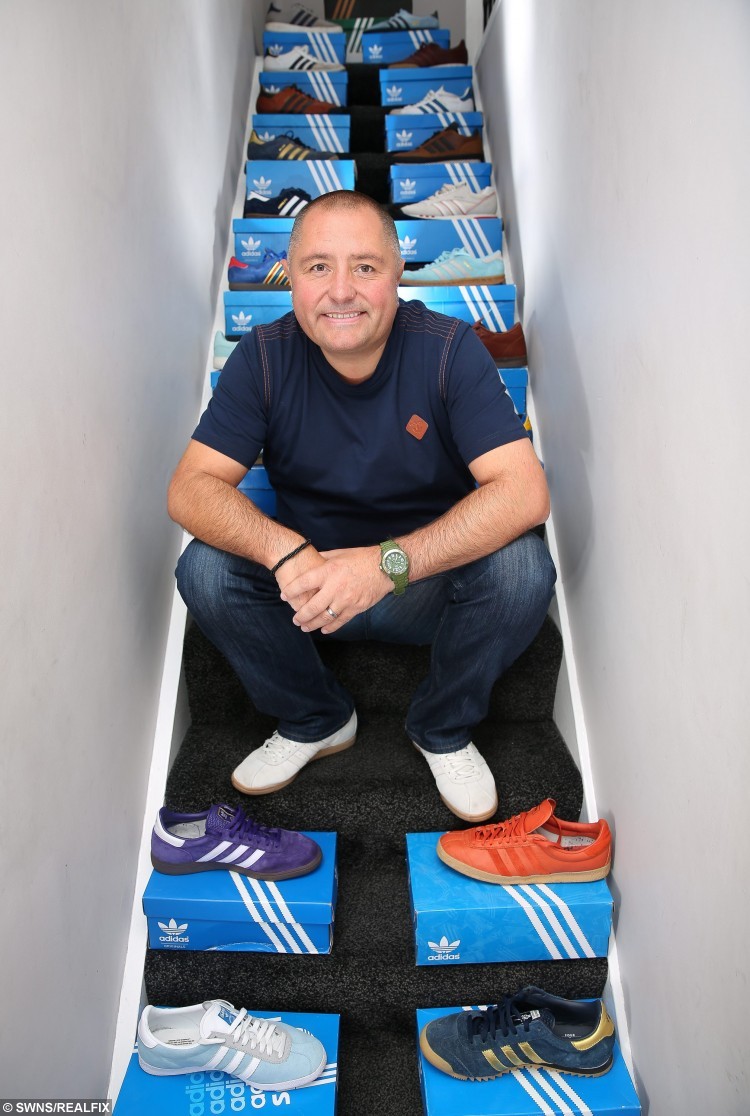 Whenever he goes anywhere he will always take a trip to a sports shop to see what they have in stock.

And whenever he goes on holiday he has to whittle his collection down to three – his limit for the suitcase.

He said: “If I buy a pair on holiday I’ve fathomed a way of carefully dismantling the box and flat-packing it so I can get them home.”

When he has worn a pair he will clean them with sugar soap and return them to their rightful place.

He said: “I find sugar soap works best. You can buy proper cleaner but it’s quite expensive and when you clean your trainers like I do I go through it quite quickly.

“I do Faye’s head in when we’re out because I don’t like getting them dirty, I’ll avoid a puddle and mud and I’m not impressed if someone stands on my foot or I get beer dripped on them.”

He has every colour for every occasion and dresses from his trainers up.

His favourite pair are his white Adidas Superstars that were brought to fame by Run DMC.

His Superstars are 30-years-old and are battered but do come out every so often for a wearing.

He said: “The brand was massive in the 80s and kind of lost its way in the 90s when other competitors appeared.

“The choice of trainers slumped and it appeared the Gazelle was the only decent trainer going. That’s why JK of Jameriquio had loads of pairs.

“But now the choice is amazing, I just can’t help myself.

“Some may think I’m crazy but I actually see my collection as an investment. I will pass these trainers down to my son and if he is a size nine he will be alright.

“He can do what he wants with them, if he wishes to sell them I won’t mind because he will only inherit them when I’m dead.

“And as for Faye, I just have to keep appealing to her to understand because she knew what she was getting into. I love my Adidas classics. They are part of me and who I am.” 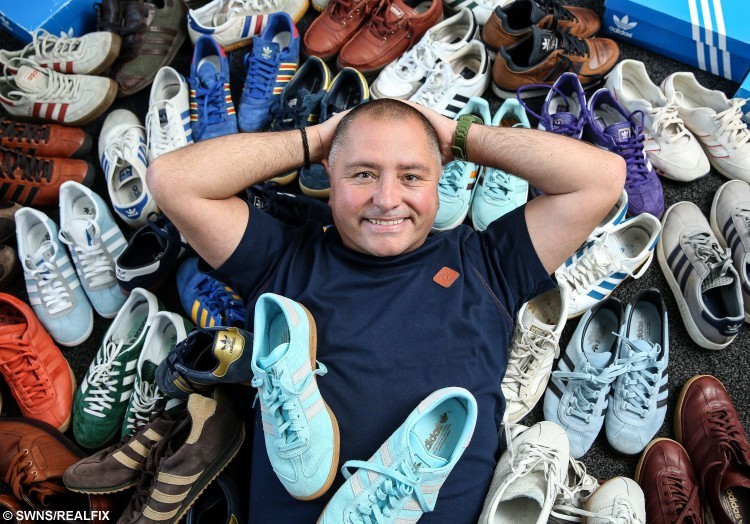