Let it Dough! Pizza that’s way too good to eat

Iconic images from some the nation’s favourite films have been been captured in tomato sauce and toppings to create unique pizzas of art.

Using the popular snack as medium, portrait artist Nathan Wyburn has created stunningly accurate images – including Uma Thurman’s raven haired moll in Pulp Fiction and, fittingly, Michael J Fox in his career defining role as Marty McFly in Back to the Future.

Creating the main body of the portraits with tomato sauce, Nathan then adorns his 12 inch dough canvases with toppings, including cheese, olives, pepperoni and peppers.

The edible art was commissioned by Dominos Pizza in celebration of their 30th anniversary in the UK – the first store opened in Luton in 1985.

And the pizza portraits are in honour of the three decades of nights in with a movie and a slice.

Dominos hosted a a ‘Movie Nights’ poll to see who would make the cut.

After collating all the data, the top 5 film characters that made it into the pizza oven were:

Talented Nathan, 25, is a fine art graduate from Wales who specialises in creating his masterpieces from unusual materials.

He was previously commissioned by Dominos to create iconic ‘pizza selfies’ for a young couple from Bury, Greater Manchester on their wedding day in January 2004.

Simon Wallis, Sales and Marketing Director of Domino’s Pizza UK, said: “Domino’s has been bringing people together to make movie nights to remember for over 30 years.

“We know nothing goes better with a great Betamax, VHS, DVD, Blue Ray DVD, download or boxset on the sofa than hot, freshly-made pizza.

“So here’s to another 30 years of great nights in!” 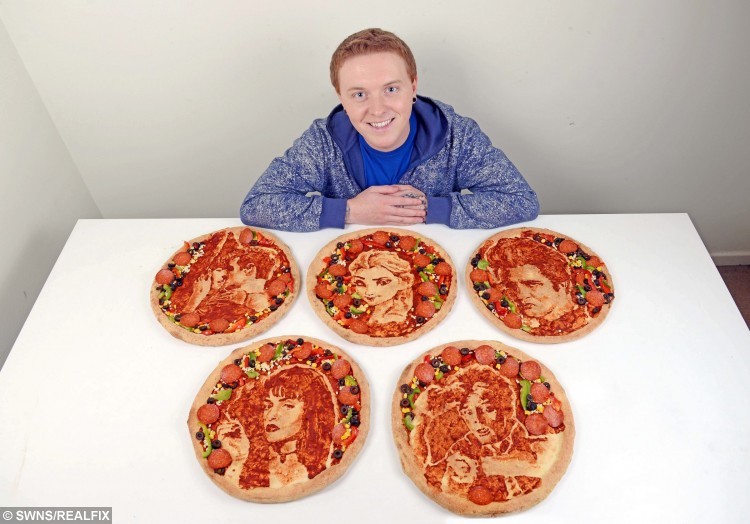