Ted Richards, 56, from Hartcliffe in Bristol, who has had his ears taken off so he can look more like his Parrot. August 16 2015. See SWNS story SWPARROT; A man who had his face and eyeballs tattooed to look like his pet parrots has gone a step further - by cutting off his EARS. Bonkers Ted Richards, 56, is obsessed by pets Ellie, Teaka, Timneh, Jake and Bubi and has his face tattooed with colourful feathers. But the animal nut - who has 110 tattoos, 50 piercings and a split tongue - has now had both his ears removed by a surgeon in a six hour operation. Eccentric Ted has given his severed ears to a friend who "will appreciate them" and is now planning to find a surgeon prepared to turn his nose into a BEAK.

A man who had his face and eyeballs tattooed to look like his pet parrots has gone a step further – by cutting off his EARS.

Bonkers Ted Richards, 56, is obsessed by pets Ellie, Teaka, Timneh, Jake and Bubi and has his face tattooed with colourful feathers.

But the animal nut – who has 110 tattoos, 50 piercings and a split tongue – has now had both his ears removed by a surgeon in a six hour operation.

Eccentric Ted has given his severed ears to a friend who “will appreciate them” and is now planning to find a surgeon prepared to turn his nose into a BEAK.

He said: “I think it looks really great. I love it. It’s the best thing that has happened to me.

“I am so happy it’s unreal, I can’t stop looking in the mirror.

“I’ve done it because I want to look like my parrots as much as possible.”

“I’ve had my hair long for so many years my ears have been covered up.

“I have to admit I did used to get teased at school about my ears but that not the reason I’ve had it done.”

“The kids are running up to me and asking to see gory photos – they just love it.

“They are just so fascinated. I was really surprised – I thought they were more likely to run away.”

Ted, a retired shoe factory worker, got his first tattoo in 1976 and has since built up a collection covering almost his entire body.

He also has a peace sign branded on his left shoulder with a 750 degrees centigrade hot iron and two magnets implanted in his hands.

He shares his home in Hartcliffe, Bristol with his four parrots, as well as South American green iguana Iggy, and pitbull terrier Candy.

He scours the internet looking for new procedures and says his facial transformation is a tribute to his “babies” – Ellie, a green winged macaw, and Teaka, a harlequin macaw.

Ted is keeping tight-lipped about who carried out the six hour operation, but insists he is “happier than ever,” and has even now got himself a girlfriend, Suzannah, 31.

Since undergoing the operation Ted says the only issue he has is keeping his glasses in place – so he has had two small metal pins added to the side of his head.

He added: “I went to the supermarket the other day and when I went in I said ‘blimey it’s so windy out there it blew my ears off and everybody had a chuckle.

“There’s no doubt that when they made me they broke the mould.

“But seriously, I love the fact that I’m unique and I have always wanted to be different.”

The practice of removing someone’s ears was historically done as an act of physical punishment in England called ‘cropping.’

Marc Pacifico, a consultant plastic surgeon and member of the British Association of Aesthetic Plastic Surgeons, slammed the surgery.

He said: “I am absolutely horrified to learn that someone has voluntarily put themselves forward for this to be done and possibly more so that he found somebody to actually carry it out.

“The sad truth of life though is that if you want something badly enough you will eventually find someone willing to do it.

“I would like to think whoever did this is not medically qualified because that would call into judgement their ethics and morals.

“As an accredited plastic surgeon you have to have a great sense of moral and ethical responsibility.

“I can only assume the ethical code and moral compass of whoever did this does not.”

Ted, who is known as Parrot Man, said: “It took a while to do because there is only one other person in the world who has had it done. 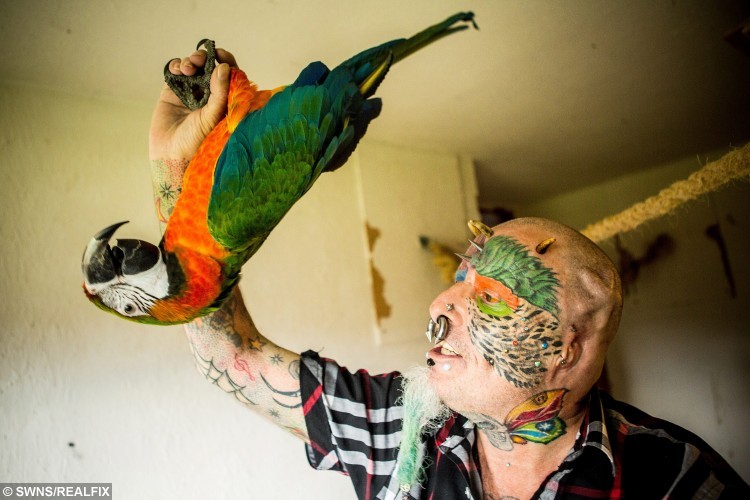 “They are in America and transgender, and they want to look like a lizard.

“But they had one done first and then the other later, but I had both done at the same time.

“They’ve also had their nose done to look like a beak. I like that and I am seriously considering doing that.

“The surgeon who did my ears has years of medical experience, and he would be able to do it, no problem.”

The risks of the six-hour surgery to remove his ears didn’t seem to bother Ted.

He added: “I could have died from a massive infection or something. It’s a major job.

“It came so close to my skull, as when you look at me full on you can’t see nothing. And the nerve endings and blood vessels too. Everything is risky, but I wasn’t worried one bit.

“If there had been any major complications it was down to me [not the surgeon]. But I’m lucky as I heal so quickly.”

Ted says he no longer speaks to his family and has just two friends.

He said: “The parrots love it. And I met someone, Suzannah, who I’m moving in with in Brighton.

“She loves it as she is into body modification as well. She is going to get a lot more done.

“We’re going to go crazy. I might get 16 transdermals put into my head to look like a mohican, or something like that, but it will definitely be another big mod. 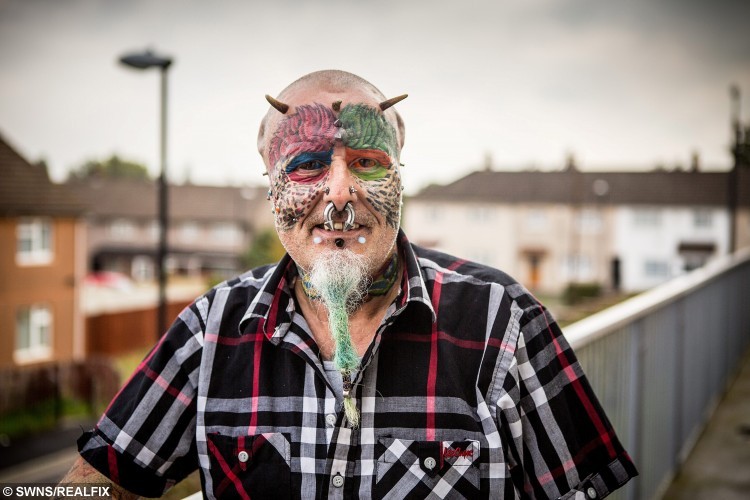 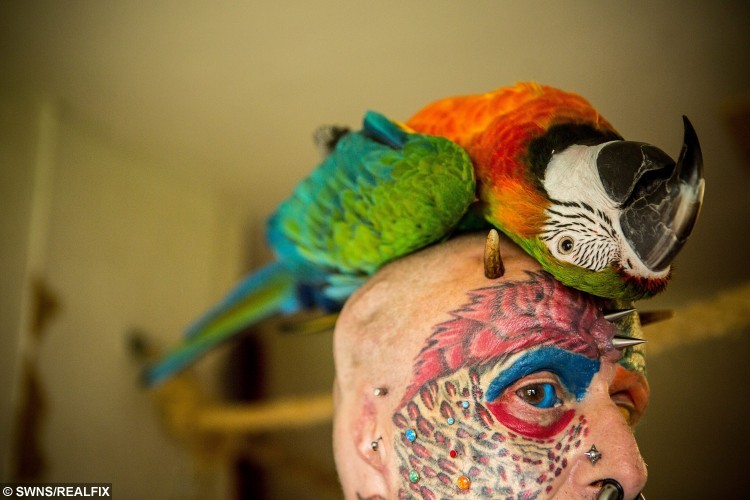 “Suzannah has got something I have never had the chance of having – children. Because my ex didn’t want any so I had a vasectomy. She has a 10-year-old and a two-year-old.”

Responding to critics, Ted said: “Bring it on. The surgeon knows for a fact he won’t be able to do it because if he got caught he would be struck off.

“The only people who show negativity are people who want it done or other artists who I didn’t go to.

“I know I’m going to get the white coat people coming round saying its completely illegal. They say we can’t do what we want to do to make us look like we want to.

“But my argument is what is stopping me going abroad and having cosmetic surgery done by an iffy surgeon, coming back here, having complications and getting the NHS to sort them out free of charge?”

When asked the reason why he wanted his ears to come off, he said:

“When I was a kiddie I was always tormented about my ears because they were big.”

“So I always had long hair to cover them up. Last year I uncovered them but I was still not happy, and now I’ve had them off nobody can wind me up.”

Ted has given his ears to an anonymous person he “knew would appreciate them”, who is going to preserve them in resin and put them on display somewhere. 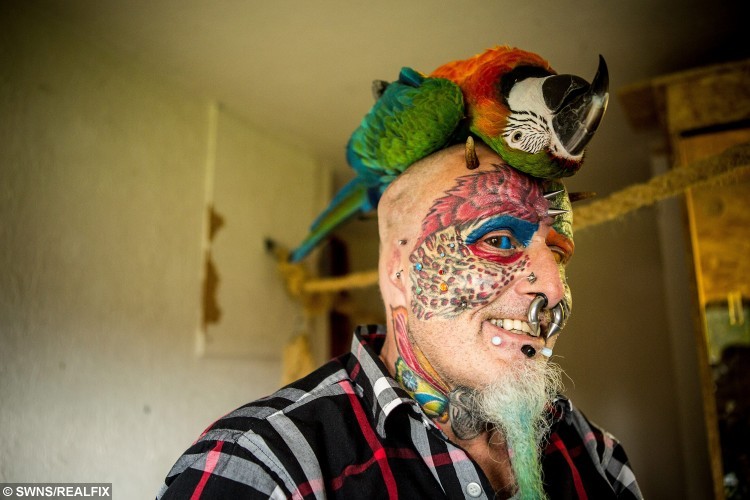