Meet Clover, the adorable duckling that thinks it’s a human

by RealFix
in Animals, Bizarre, Cute
0

These adorable snaps capture a cute duckling doing all the same things humans do – including the school run, going to the pub and even nipping to the hairdressers to have her weekly blow dry.

Owner Emma Stanworth, 21, has taken five-week-old Clover to schools, pubs, parks, swimming pools and even on bus trips after raising her from just a chick.

The tiny Cayuga-Aylesbury cross duckling was hatched by Emma and the pair have formed an inseparable bond after Clover almost died before she had even started life – as a human.

Poultry keeper Emma, of Leeds, West Yorks., said: “We’ve been incubating some eggs and we did a fertility test and found one was a twin embryo.

“Clover’s twin died at four days old and we didn’t think she’d survive either, her health was poor and people even told me to have her put to sleep.

“But I knew with patience and hope I could get her fit and healthy again.”

Since Clover pulled through, the young duck has formed an attachment to Emma and moved into her home which she shares with her parents and three younger siblings.

The pair enjoy going on adventures together and Clover is proving herself to be much of a popular local celebrity – as fans queue up to make a fuss of her wherever she goes.

Emma, who works at Batley Girls’ High School, said: “She follows me everywhere – she’s really imprinted herself on me.

“When we go out people love to see her and hold her – it’s amazing really, it’s not something you see every day and they really don’t expect it.”

Emma says she and her unusual pet have an ‘unbreakable’ bond, adding: “I’m very protective of her, she’s always by my side. She’ll follow me into shops when I tell her to wait outside, and if I’m carrying something she wants she’ll jump up to try and get it.”

“I love her to pieces, it’s great to see her waddling up the path on her own. I want people to be inspired by her story – humans can be friends with ducks.”

Clover’s cult status has led to Emma even setting up a fan page on Facebook with regular ‘duckdates’ for her followers.

“I even have an American lady who asks to see pictures of her. I ask her fans to suggest where I should take her next.

“She even comes on the morning school run with my siblings – she’s like a dog.” 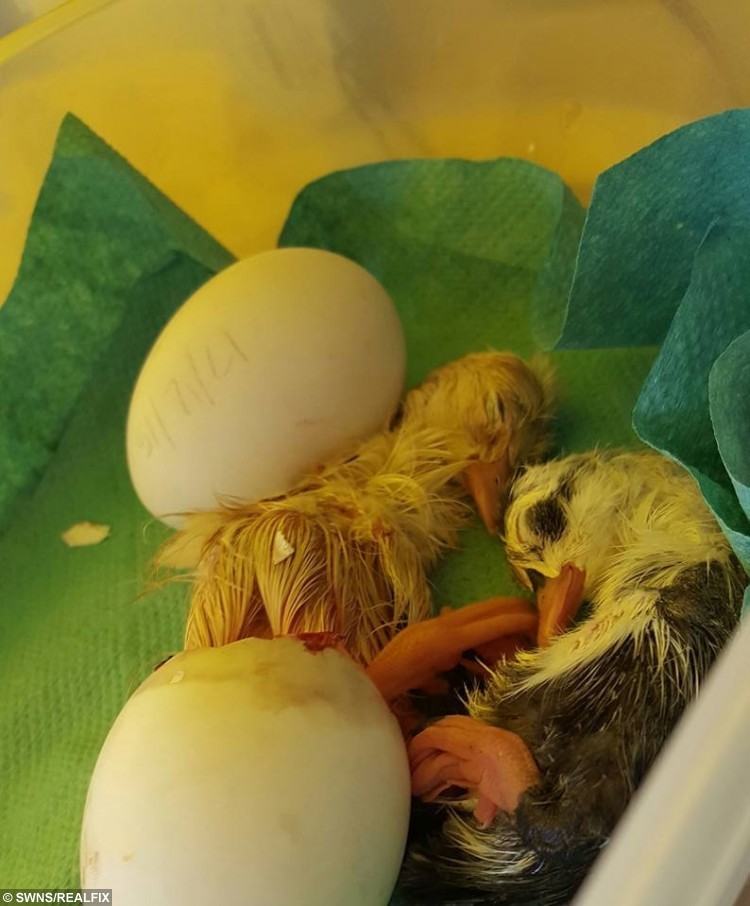 Clover’s intrepid travels have included a journey on a local bus – and luckily the driver didn’t even bat an eyelid.

Speaking about the adventure, Emma added: “He [bus driver] just said it wasn’t a problem. We’ve got taxis together too – and been to a pub in Drighlington.”

Another recent expedition was to Batley Sports Centre – where Clover posed for photos with staff and customers.

Emma said: “She couldn’t swim in the pool because of the chlorine, but she goes in the trout pond in Batley Park and I’m going to take her to the pond at Oakwell Hall.”

And now Clover is being turned into a poster chick as Emma is promoting Clover-themed merchandise with the proceeds being donated to Phoenix Hen Rescue – a national charity which cares for former battery chickens.

With this pasty – He got down on one knee in GREGGS!